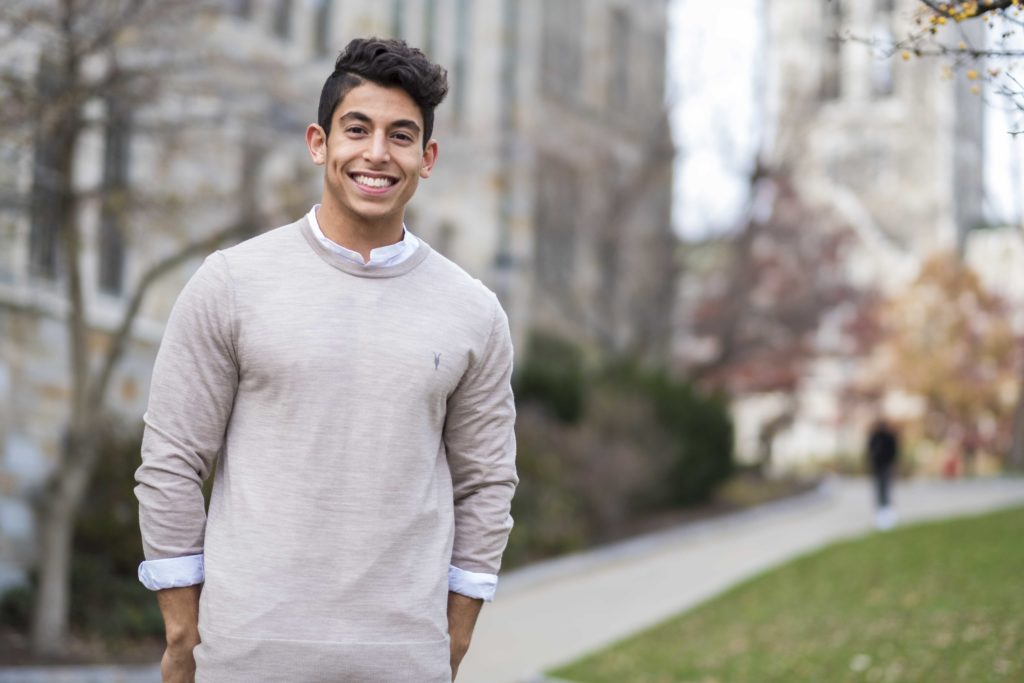 Althari Hopes to Score in Public Policy and Global Affairs

Sultan Althari, MCAS ’18, has boundless energy. His vibrant personality is apparent as he walks through campus—he stops to chat with a friend in Gasson’s reading room and throws up a hand in greeting to another at Hillside. Even his professors recognize his charm and charisma.

“He’s kind of a celebrity on campus,” said Kathleen Bailey, a professor in the political science department and the supervisor of Althari’s senior thesis.

Born in Saudi Arabia, Althari moved to Virginia when he was only three months old so that his mother could complete her medical residency at Georgetown University. His father worked for the embassy while pursuing a higher degree in finance, and Althari grew up having a self-described normal ’90s childhood. When he was about five years old, his mother finished her residency and the family returned to Saudi Arabia.

For the first few years following his return to Saudi Arabia, Althari attended elementary and middle school. At around 10, he began to dream of becoming a professional soccer player. What was once a hobby quickly became an obsession, and before long he told his parents how he felt. Their incredible support allowed him to pursue his passion, and he began training with local clubs.

Althari went to Milan for two trials for the professional team when he was only 14. Although he didn’t make it, he is grateful for the experience because it provided him with feedback that allowed him to see what he had to improve in order to get where he wanted to be. He embraced the concept of “failing forward” in order to turn his failures into successes.

After returning home from Milan, Althari heard about Aspire Academy in Qatar, which was dedicated to recruiting superior athletes to attend school. Althari said that his parents recognized his independence and ambition, and understood why he wanted to take a step as major as moving to another country to pursue soccer. Coming from a very academically focused family, he realized that his dream was unconventional, but not impossible.

Although his family was supportive, he faced social pushback. Some of his peers at home didn’t understand why he wasn’t following the norm. His aspirations were stronger than any doubts, however, and he decided to try the academy. What may seem like something too nerve-wracking for any 15-year-old to attempt was just another step for Althari.

“He’s fearless in so many ways,” said Bailey.

He went for one month as a trial period—incredibly stressful for a 15-year-old surrounded by people who were gifted both athletically and academically. He had two- to three-hour practices, sometimes twice a day. Even though he felt challenged, he was happy with his decision. The school had 24 fields, and for a young athlete, that was paradise.

“It was like [being a] kid in a candy shop,” Althari said.

He was awarded a scholarship from the school and continued on to be one of the top three scholar athletes by the time of his graduation. As his senior year rolled around, he had a choice to make: Should he continue on the path to professional soccer or choose a more academic route?

Althari had remained dedicated to his academics throughout his time at school, always reading and trying to improve in his studies. After strong urging from his teachers, he started to look into combining his passion for soccer with his schooling. After emailing with coach Ed Kelly, he decided to come to Boston College. His siblings were familiar with Boston since they had attended school in the area.

He was intrigued by BC because, although Boston has a large Saudi community, BC only had one undergraduate and three graduate Saudi students at the time, according to the BC Fact Book. Althari was interested as to why they were so underrepresented, and embraced his role as a trailblazer and model for other Saudi students in the future. Since his arrival, BC has gained four more Saudi students in its undergraduate and graduate programs combined. Althari recognized that BC was one of the best schools in the country to carry out his ambitions.

Althari credits much of his academic success to his family. His mother, Khawla Al Khuraya, is a physician and cancer specialist in Saudi Arabia. She is at the forefront in her field, having discovered the FOSM1 gene that is responsible for the formation of cancer cells in the human body. Her work did not go unnoticed, and in 2010 she was awarded the Order of Abdulaziz al Saud presented by King Abdullah, according to Arabian Business’s list of the Top 100 Most Powerful Arab Women. She was the first woman in history to receive the award. Three years later, she became one of 30 women appointed to the Consultative Assembly of Saudi Arabia, a group of 150 members that is dedicated to proposing laws.

Althari looks to the other women in his life, his sisters, for inspiration as well. His older sister, Sara, earned a degree from Wellesley and continued on to pursue a Ph.D. at Oxford University. His other sister, Mashael, is getting her master’s at Boston University after completing her undergraduate studies at Simmons, and his brother is working for the United Nations. Althari felt pressure being the youngest in such a high-achieving family, but it was a positive pressure that encouraged him to do his best. His family is firm in its belief that you can make it with the right amount of work.

When Althari was in Saudi Arabia, he realized that he was an underdog in all aspects of the word. Saudi Arabia wasn’t a top nation for athletics or academics, but his understanding of this didn’t discourage him—it pushed him to work harder and go wherever he had to in order to succeed.

When he arrived at BC, he found that his passion for political science, global affairs, and social justice grew faster than his love for soccer. He recognized the power he had as a student here and fully embraced the idea that one person can make a difference. Being one of only a handful of Saudi students on campus, Althari wanted to be a model for his nation.

“I wanted to be a good example for not only Saudis, not only Arabs, but for Muslims in general,” Althari said. Every morning, he prays before he does anything else. If he has time, he likes to meditate before he leaves home for the day.

He wants to set the tone for incoming students and correct some of the false assumptions about Saudi men. Much to his pleasure, he has been able to see some of the impacts he has had throughout his time here—his friends that knew little to nothing about the politics and events in Saudi Arabia now keep up with the news every week. Althari stresses the importance of believing that one person can make a difference, a philosophy that carried into his choice for a senior thesis and plans for his future in public policy.

Althari is currently working on a thesis on the correlation between the empowerment of youth and national development in Saudi Arabia.The 32-year-old crown prince in Saudi Arabia, Mohammed bin Salmen, is currently leading a reform in public policy focused on the empowerment of young people and is encouraging the aspirations of young people living there.

“He says we have the ambition, the creativity, the will, and the skills to succeed. All we need to do is work,” Althari said. “I’m a firm believer in that.”

Young people are on the forefront of national development in Saudi Arabia in a way that they haven’t been before. While there are some reports on this correlation, Althari believes that they are missing a crucial element. Althari is not an analyst from the United States who has never visited the region, and he is not making generalizations and oversimplifications about the area and the people living in it. He is not an outsider that is speculating about what it might be like to be a Saudi youth—he is a young Saudi man with the desire to give back to the nation that allowed him to be educated at BC through the King Abdullah scholarship, a grant awarded to exceptional Saudi citizens so that they can study at the best universities in the world without the burden of debt.

“I want to provide an impartial, yet fair, expansive, and exhaustive account on Saudi youth and how they affect national development,” Althari said.

He has been analyzing the public’s opinions on how young policy makers have affected youth by conducting surveys and interviews. Althari’s goal is to be involved in the shift from a lack of equity to a system where merit is valued. He hopes to pursue a master’s degree in national public policy or global affairs in order to help the most that he can.

“I have huge confidence that he is going to be successful,” Bailey said. “He’s going to be an agent of positive change in the world.”