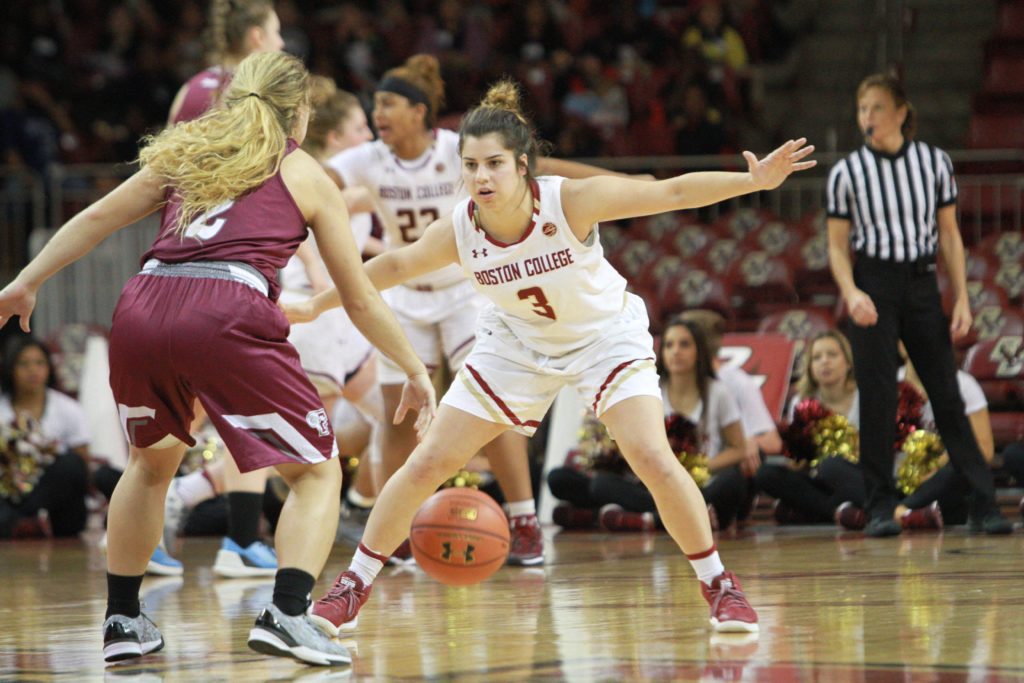 BC Drops Third Straight To Fairfield

After more struggles on the road against Boston University and Columbia, Boston College women’s basketball returned home Sunday, attempting to right the ship. Previously undefeated in the familiar confines of Conte Forum, the Eagles faltered late in the second half and dropped their third straight game, 66-58, to visiting Fairfield (3-5). BC (3-5) found itself in a difficult position coming into the game, with only 10 active players, and never really found a rhythm against the Stags.

The game early on was a defensive battle, with both teams pressing high. BC picked up its defensive assignments right at half court, which proved effective early, but the Stags generated open looks with lots of movement and screens. Both teams struggled offensively early, as the first three minutes of the game were completely scoreless.

Turnover problems plagued the Eagles, as they committed four early, with no signs of slowing down. Fairfield’s offense created open looks for its shooters from deep, but they couldn’t convert, shooting only 25 percent from beyond the arc, and the Stags went into the first intermission with a slim one-point lead.

The beginning of the second quarter saw more of the same, with Fairfield shooting lots of 3-pointers and BC committing more turnovers. Fairfield continued to create a lot of open shots, due to a good offensive scheme that resulted in plenty of miscommunication on the Eagles’ front. The Stags took 18 treys in the first half, but only made five of them. The Eagles, however, couldn’t capitalize on the Stags’ turnover issues. Fairfield had 13 at the break, including four takeaways apiece for Taylor Ortlepp and Katie Quandt. The game remained close throughout the half, though, as both team’s offenses were rather stagnant and unable to make a run. But the period did end on a high note for the Eagles, as guard Milan Bolden-Morris banked in a last second 3-pointer to give them a one-point lead.

The second half saw a change in strategy for both teams, as each squad looked for its forwards in the paint. This seemed to benefit the Eagles as they had a decisive 33-18 rebound advantage at the close of the first half, but that wasn’t the case. The Stags moved away from 3-point shooting and began setting screens for their bigs to roll to the hoop, rather than trying to spring open the guards for 3-point shots. This created a lot of opportunities for forward Khadidiatou Diouf, who used her tremendous post moves to score 10 important points for the Stags in the third alone. She really started to dominate once the Eagles switched to a zone defense halfway through the period, which they quickly abandoned. BC forward Emma Guy managed to get going, scoring 10 for the struggling BC offense, but her contributions were not enough to keep the game close.

“The defenses dictated the play in this game,” BC head coach Erik Johnson said. “That’s why both teams started to go inside in the second half.”

Fairfield built a seven-point lead entering the final quarter, but BC came out firing. It opened up the period on a 11-2 run, tying the game at 47 with seven minutes to play. A couple of 3-point shots and a driving layup by Taylor Ortlepp brought the Eagles back from their deficit.
The game eventually slipped away from BC when Fairfield started putting the ball in the hands of forward Samantha Cooper. She completely took over the game with a trio of consecutive 3-pointers, creating a comfortable lead for the Stags. She finished the game with a double-double, her fourth of the season, totaling 24 points and 10 rebounds.

A late comeback from the Eagles was not enough, as BC fell eight points shy of Fairfield, when all was said and done. After shooting 36 percent from the field, the Eagles were lucky to keep the game close in the first place.