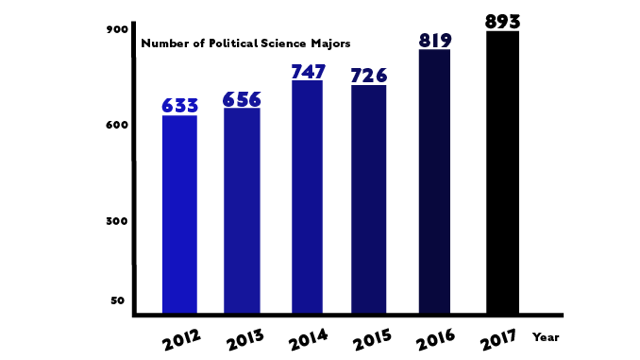 Political science majors will be able to take selected courses in the International Studies Program to count toward their major this upcoming semester. The policy was put into place after the class registration period, due the fact that many of the non-introductory political science courses were already filled after upperclassmen finished registering. In general, the courses will be considered electives, although there are some exceptions.

“Currently we have about 900 majors, and by the time the sophomores got around to registering there were no courses that were open,” said Kenji Hayao, the director of undergraduate studies for the department.

Hayao referenced the recent increase in the number of majors as a possible reason for the difficulty in having enough course seats for students. Political Science majors have increased from 633 to 893 in the past five years, according to the “Boston College Fact Book” and The Chronicle.

“We probably added about 100 majors in the last year or so,” Hayao said. “It was always a problem, but it has become much more acute. We have too many majors for the courses that we have. We don’t have enough seats, essentially.”

“We are committed to working with all of the departments in the Morrissey College to manage course offerings in a way that will ensure that all students can fulfill their major requirements,” Dean of MCAS Rev. Gregory Kalscheur, S.J., said in email.

The policy change is designed specifically to help sophomores for whom many electives were no longer available. Hayao said that this was essentially a one-time decision to accommodate them.

“Students who are applying to study abroad, for instance in their junior year, need to have courses in their sophomore year in order to make good progress on the major,” Hayao said.

Due to the larger-than-average freshman class, with a enrollment of 2,412 students, according to BC News, there is uncertainty over whether the political science department will be able to accommodate all the students who wish to major in that area. This also raises the question of whether this one-off change will have to extend into future semesters.

Hayao also speculated the recent election could be driving interest in the major. He thinks that President Donald Trump’s election could have boosted the number of majors entering the department. He observed a similar phenomenon in 2008 when former President Barack Obama was elected.

“Obviously there’s a lot more interest in elections and that helps drive interest in political science, but this is kind of an unusual election so we don’t know what’s going to happen,” Hayao said.