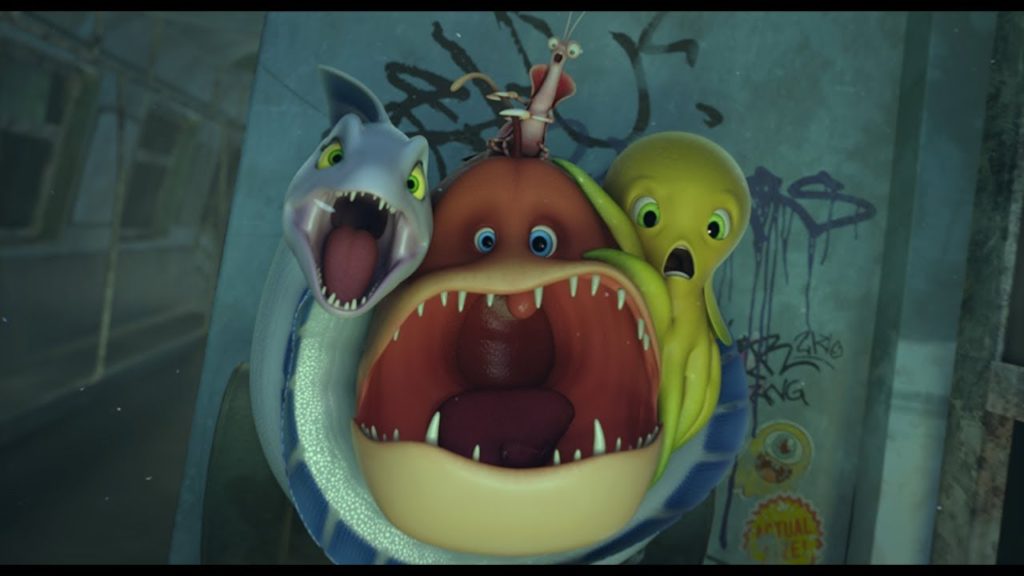 Adding to the already bloated backlog of bad movies in the depths (get it?) of Netflix’s “Children & Family” section is Deep, a recently released animated film that promises family fun for kids of all ages.

This promise is broken from the very beginning of this “movie.” First, it begins with narration by the titular character, Deep (Justin Felbinger), a small yellow octopus. He describes his home, affectionately monikered “The Abyss,” a small utopian undersea society of fish and other sea creatures, benevolently presided over by The Kraken (Dwight Schultz), who also happens to be Deep’s grandfather.

The Abyss’s inhabitants live there happily and in quiet safety, away from the outside ocean. Deep explains, through a cunning attempt at exposition, that it is the year 2100 (because sea creatures know the current year and have continued to keep track) and that humans have vacated Earth after destroying it (in a very blatant endeavor at social moralizing). Oceans cover most of the planet, and all that is left of mankind is the garbage they have left behind. If this message sounds at all familiar, it’s because WALL-E, FernGully, and The Lorax exist. Yet here is this movie.

After Deep narrates to the viewers for nigh five minutes, the camera pans to him, and in a grand reversal of cinematography, he turns to it and addresses the audience directly. Neither fourth-wall breaking, nor narration, are ever employed again in the rest of the movie. Why they are used here, in light of this information, escapes interpretation.

Through a sequence of scenes that can be generously described as “connected,” the audience is introduced to Deep and his friends. He’s an impulsive and explorative young octopus who enjoys venturing outside The Abyss and collecting human relics. After he neglects his chores, his grandfather, The Kraken, rebukes him. While Deep seems to think that The Kraken is admonishing him, it appears that Dwight Schultz is merely reading a character description of Deep into a microphone. An actual line of dialogue is “You endanger all of us. And it’s far worse because you are my grandson and heir to the throne. Deep, you’re impulsive and reckless. You only think of yourself.”

Now that the audience is oh so sure of Deep’s character traits, the real plot of the movie can begin. Deep’s exploratory nature and his habit of throwing caution to the wind inevitably ruin things for everyone else. Through a convoluted series of events, Deep winds up trapping his friends and family in The Abyss while also setting off an underwater volcano, which is slowly pouring lava into the space. The only one strong enough to free the trapped creatures is Nathan, the white whale. Deep and two of his friends—an anglerfish named Evo (Stephen Hughes) and a shrimp named Alice (Lindsey Alena)—must race against time to find Nathan and save their people.

Aside from the story, there are a lot of other problems with Deep. First, for a film that is entirely animated, the animation is not very good. Often, the movie looks a lot like an animated television show that might run at 11 a.m. on Wednesdays on Disney Channel. Deep is also a “musical.” There are three song-and-dance numbers throughout the movie, all of them performed by “villains.” It’s unfortunate because first, the singing is generally poor, and second, Deep seems to be shooting for a soundtrack hit like Frozen or Moana, and it should know better.

Deep also refuses to abide by its own physics. Throughout the entire first half of the movie, Deep, Evo, Alice, and a moray eel they befriend named Maura (Elisabeth Gray) demonstrate their ability to swim upwards, or vertically, in the water. Fish of all kinds are very capable of this mean feat in real life, and it is appropriately mirrored here. Yet as soon as the plot requires it, these intrepid youngsters can apparently only swim horizontally. This occurs when the quartet meets the second obstacle of its journey, hundreds of evil and ethnically offensive crabs. The crabs seem intent on eating them and surround them accordingly. However, none of these crabs demonstrate the ability to swim, as they walk everywhere they move. Deep and his friends should have no problem extricating themselves from the potentially life-threatening situation by merely utilizing their ability to move on a z-axis. Instead, the audience is treated to a song. Sigh.

Granted, Deep is a movie made for children. Perhaps children would not notice all, or even some, of these flaws. But many movies made for children, however, have proven over and over again their ability to be good. Classic Disney movies have stood the test of time, recent Pixar and Dreamworks movies are generally good, and even other studios like Studio Ghibli regularly produce very high-quality content. Deep shouldn’t be held to the same standard as landmark feats of animated cinema like Spirited Away or Up, but the effort to emulate them should at least be made. As of now, Deep appears to be a shallow knock-off of Finding Nemo.

Featured Image by The Thinklab