Right now, Boston College football is living in the moment. Fully immersed in bowl game preparation, the Eagles are just a week away from making the trip to Yankee Stadium and playing Iowa in the New Era Pinstripe Bowl.

But Wednesday morning was all about the future.

For the first time ever, recruits were able to sign their National Letters of Intent prior to National Signing Day (Feb. 1). For the first few hours of the early signing period, which spans from Dec. 20 to Dec. 22, the commitments came rolling in, one after the next. Over the course of an hour, 19 players penned their way to Chestnut Hill—one shy of last year’s entire recruiting class.

In what has been an injury-riddled year, BC’s lack of depth on the offensive line and in the linebacking corps has often dictated the narrative, especially throughout the first month and a half of the season. And while guys like Ben Petrula, Sam Schmal, John Lamot, Kevin Bletzer, and Davon Jones have stepped up, head coach Steve Addazio clearly took note of his team’s deficiency.

“I believe that we have signed a terrific class—one of the best—met all of our needs, brought some great future Eagles in here that will represent Boston College,” Addazio told reporters during Wednesday’s press conference, per BCEagles.com. “And that fit is really important. I think we’ve hit on our class as well as meeting the needs of our roster.”

Well over a third of Wednesday’s signees consisted of offensive linemen and linebackers. None was more notable than offensive guard Finn Dirstine. Not only is the 6-foot-5, 320-pound Lawrence Academy product the 12th-ranked player at his position, but he’s also the Eagles’ lone four-star recruit.

After going two years without a blue chip player, BC has now locked in back-to-back four-star recruits: Dirstine and his former high school teammate A.J. Dillon. Dirstine will join a unit that, despite losing Jon Baker and Elijah Johnson to season-ending injuries, only allowed 13 sacks during the regular season—good for 11th in the nation—and paved the way for the 24th-best rushing attack in all of college football. Addazio had to trek across the country to snatch the other two offensive linemen: Texas natives Thomas Shelmire and Tyler Vrabel, son of longtime New England Patriots linebacker Mike Vrabel.

On the other side of the ball, the fifth-year coach pulled in five linebackers—two more than any other position group. The batch is headlined by Hugh Davis, Vinny DePalma, and Evan Stewart, three top-ranked inside linebackers. Stewart is the most intriguing of the trio. The Sparta, N.J. native primarily played safety at St. Joseph’s Regional, but also took a fair share of snaps at linebacker. Due to his hard-hitting nature and ability to rush the passer, Stewart’s full-time transition to the position should be seamless.

To account for the departure of both Kamrin Moore and Isaac Yiadom, who will be graduating in May, Addazio reeled in Aaron Gethers, Jason Maitre, and Elijah Jones, three of the better cornerbacks in the Northeast. Both Maitre and Jones are two-way players who, in addition to playing corner, starred as wide receivers in high school. Maitre, the top-rated athlete in the state of Massachusetts, even tried his hand at returning kicks, taking a pair of punts and one kickoff to the house during his senior year.

To round out the defense, BC beefed up in the trenches with the recruitment of Ryan Betro and Kyiev Bennermon. The two defensive tackles, both of whom are the top-ranked players at the position in their respective states, give the Eagles some insurance, as Noa Merritt is on his way, and Ray Smith is gearing up for his senior season.

As far as offensive skill positions are concerned, BC continued to fortify its running back group and threw a few more quarterbacks into the mix behind Anthony Brown.

David Bailey is a tailback built like his new mentor. At 6-foot-1, 235 pounds, the Ridgely, Maryland native rushed for over 1,500 yards and 35 touchdowns this past season at Cardinal Hayes High School. Someday, he’ll be taking snaps from either Matt Valecce or Johnny Langan. The two incoming quarterbacks couldn’t be more different. Similar to E.J. Perry, Valecce is a pro-style gunslinger. On the other hand, Langan is a top-ranked dual-threat quarterback in the state of New Jersey. In his final campaign at Bergen Catholic, he threw for over 2,000 yards and 23 touchdowns and rushed for an additional 825 and 12 scores, en route to the school’s first Non-Public Group Four State Championship since 2004.

Langan might not be a five-star recruit, but he reminds Addazio of one that he coached when he was at Florida.

“[He’s] one of those guys that will put the team on his back, go win a game—reminds me of Tim Tebow a little bit that way,” he said. “He has that mentality to him. He’s athletic. He’s tough. And he’s a leader. Those are the things you look for in a quarterback.”

But Addazio’s biggest recruit of all might end up being one of the smallest players on the team: placekicker John Tessitore. While at Choate Rosemary Hall, he went two full seasons without missing a single field goal attempt beyond 40 yards. To put that in perspective, Colton Lichtenberg is 2-of-7 from that distance this season. Over the past three years, Eagles kickers have missed a total of 16 field goal attempts. At some point, Tessitore will be tasked with mending the kicking game.

As of now, BC has the 11th-best recruiting class in the ACC and the 55th-best in the country, according to Rivals. The Eagles’ second-half resurgence and seven-win season as a whole clearly helped, as they’ve climbed three spots in the conference’s recruiting rankings since last year. A win over Iowa on Dec. 27 could very well convince a few more players to commit come National Signing Day. 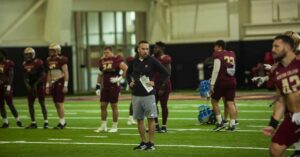