On Tuesday afternoon, when Boston College football head coach Steve Addazio was standing at the podium in front of an assembled group of reporters to talk about the upcoming spring practice, you’d be forgiven if you thought the regular season was right around the corner.

After all, there were no signs of winter. It was in the 60s, the sun beaming down on the Heights, only to get warmer in the day after. Unfortunately, snow would quickly follow, but it didn’t dampen the fact that the Jay McGillis Memorial Spring Game is less than two months away, and there’s a distinct sense of excitement around the BC football program.

“We’re excited here to kick off spring ball coming up next week,” Addazio said. “We’ve got so many exciting young guys right now and older guys alike that we’re going to have a chance to develop and grow and really continue to build this football program.”

BC had plenty of twists and turns in the offseason. First, mainstays in quarterback Darius Wade and running back Jon Hilliman elected to leave for their final year of eligibility. The Eagles earned a major win when defensive end Zach Allen announced that he’d return for his senior season, only to watch defensive line coach Paul Pasqualoni get scooped up by the Detroit Lions.

Now, with three Eagles awaiting their fate at the NFL draft combine, they welcome Bill Sheridan and Antoine Smith to the Eagles’ coaching staff. Sheridan, a former Tampa Bay Buccaneers defensive coordinator, will assume the role of linebackers coach, while Smith comes from Texas State to coach the defensive tackles.

“Both guys have built a great resume,” Addazio said. “Antoine was with our program last year off the field and has a great familiarity, hit the ground running as well as Bill Sheridan who has got an impeccable resume.”

Addazio and his new coaching staff are overseeing a roster that isn’t short on talent and experience, something that has been in short supply for BC of late. Despite starting last season 2-4, the Eagles came together down to the stretch, buoyed by the breakout performance of A.J. Dillon, a fledgling offensive line, and a capable secondary.

Dillon will obviously be the national storyline entering training camp. He finished 12 yards short of Louisville’s Heisman finalist Lamar Jackson for first in the ACC in yards (1,589) and piled up 14 touchdowns, despite starting the season behind Hilliman on the depth chart. The spotlight shone brightest on the New London, Conn. native against Jackson’s Cardinals, when he ran for 272 yards and four touchdowns in an upset win.

He’ll have a light workload in training camp after racking up 300 carries, Addazio said, but the coach didn’t hold back his aspirations for the rising sophomore in a postseason interview with ESPN.

Dillon will have plenty of familiar faces to run behind. After talking about the need to bring center Jon Baker back slowly from his season-ending knee injury, Addazio focused in on the depth on the offensive lineman. After all, not only do the Eagles have five returning starters, but they also boast seven players with 10 starts under their belt.

“So, we’ve got depth and we’ve got experience,” Addazio said. “Barring any unforeseen real devastating injuries, we should have one of the better offensive lines in the ACC Conference, and it does start up front. I’m excited about that.”

The Eagles allowed just 15 sacks all of last season, good for 12th in the country—that was with freshmen Ben Petrula and Alec Lindstrom stepping up into starting roles and impressing. Add in the potential return of Jon Baker from a knee injury, and it becomes clear that BC has enviable depth. Petrula, after all, was recruited as a tackle, but quickly grew into the center position, showcasing impressive versatility.

Under center, Anthony Brown will be back after undergoing offseason surgery. Will he be the guy who went 19-of-24 for 275 yards and three touchdowns against Virginia? Or the one who had more incompletions than completions and threw three interceptions against Wake Forest? The redshirt freshman made impressive progress last season, regardless, but an injury cut short a promising late push. Addazio was impressed with his rehab, and he’s the clear No. 1 entering the fall campaign.

“He’ll be ready to roll, obviously, as we go into the summer he’ll still be rehabbing through the spring, and each week doing more and more things,” Addazio mentioned. “So, he’s doing fantastic.”

Brown will have plenty of options to throw to, a surprising shift from years past. Tight end Tom Sweeney flourished last year, quickly growing into the top target on the roster as he led the team with 523 receiving yards. Kobay White returns as a dynamic slot option, but Addazio has plans to work in C.J. Lewis, Noah Jordan-Williams, and Christian McStravick deeper down the field. He cited the depth as something that hasn’t been seen at BC in a while, sparking hope in an offense that regularly runs the ball twice as often as it attacks through the air.

On the other side of the ball, it’s about slowly working Connor Strachan and Max Richardson back into the swing of play. Both suffered season-ending injuries very early last year, and will take it easy in spring ball to get going once again. They’ll be under the watchful eye of Sheridan, who was described by Addazio as “one of the best linebacker coaches at any level.”

In the trenches, the return of Allen is the biggest story, but Wyatt Ray and Ray Smith shouldn’t be lost in the shuffle. Both are poised for strong years, especially having grown in lieu of Harold Landry’s presence—he missed most of 2017 with an injury.

For the first time in several years, spring practice brings optimism to campus. The strange warm spell, which methodically melted any remnants of the snow crowding the Quad, seemed symbolic. After all, Addazio’s roster should have plenty of hope—it’s a good mix of experience with players who were thrust into the fire and emerged unscathed. With several top talents returning, the Eagles enter 2018 as a potential ACC dark horse. 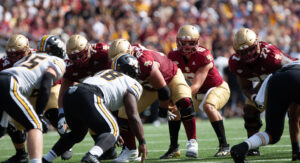 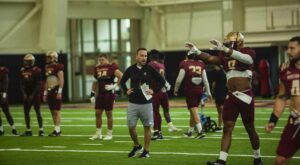