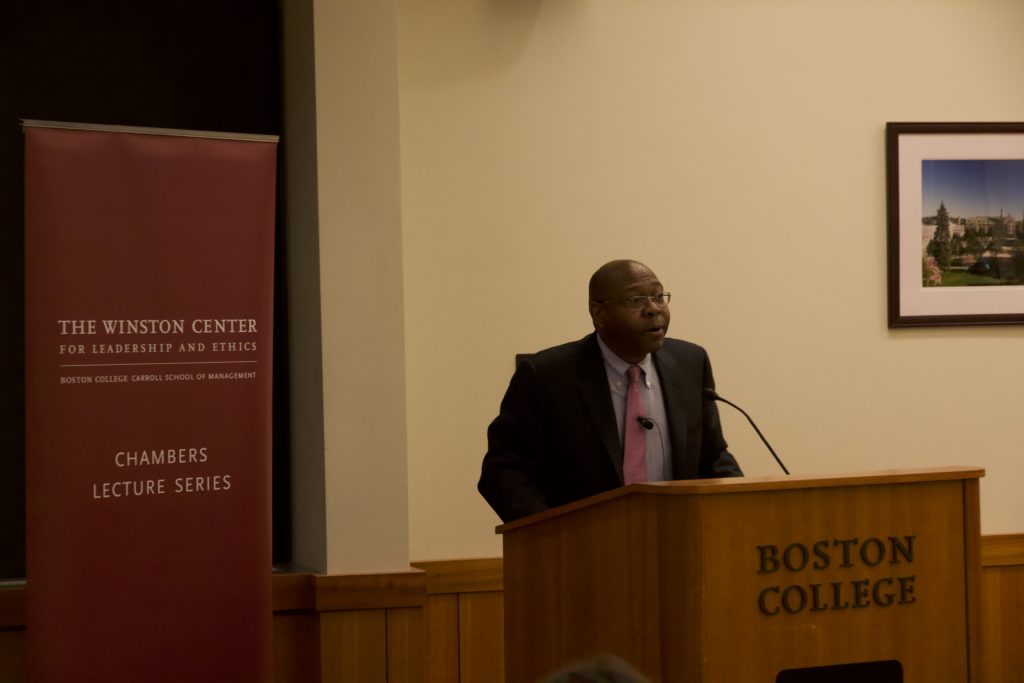 Jason Riley, a columnist for The Wall Street Journal, is not afraid to speak on issues that are often seen as controversial. As a part of the celebration of Black History Month and the Chambers Lecture Series, the Winston Center for Leadership and Ethics sponsored “The State of Affairs in America: A conversation about race and immigration with Jason Riley.”

In addition to working as a columnist for The Wall Street Journal, Riley is a senior fellow at the Manhattan Institute as well as a commentator for Fox News. He is also the author of Let Them In, False Black Power?, and Please Stop Helping Us.

Beginning with the main theme of his latest book, False Black Power?, Riley based his argument around the statement, “President Obama needed black voters more than black voters needed President Obama.” In saying this, Riley meant that political success did not fix problems that black people in America face. The political gains in politics that Obama and other black leaders have made have not been able to translate into economic success that poor black communities need, according to Riley.

“What I’m suggesting is that the belief that a black president would make a big difference in racial inequality was a misplaced belief,” he said.

Riley listed off statistics showing that poor, black communities became worse-off during Obama’s presidency in comparison to the entire U.S. population, as well as poor, white communities. He cited these facts as evidence that the policies that Obama and other liberal leaders put in place are not producing the desired outcomes in raising people out of poverty.

In Riley’s opinion, gaining political capital is not the solution to helping black people in America. Instead, developing human capital and making economic gains outside of the political sphere is the right place to start.

“The reality is that most groups in America that have risen economically have done so with little or no political influence,” Riley said. “And groups that have enjoyed early political success have risen to prosperity more slowly.”

To back up this claim, he gave an example of German and Irish immigrants who were originally discriminated against when they arrived in the United States. Riley said that these groups first worked to gain economic clout and once they were economically stable, they entered politics and were able to make a difference to help their communities. This, he said, is what black people in America should try to do instead of focusing solely on political gains.

He cited examples from the period of the 1940s through the ’70s, when black people in America made unprecedented economic gains while facing political oppression.

“Blacks today hear plenty about what they can’t achieve due to racism and the legacy of slavery, and not enough about what they did in fact achieve notwithstanding hundreds of years of bondage and political segregation,” Riley said.

He also talked about how a topic that most people shy away from: the idea of personal responsibility within the black community.

“In many cases today you’re dealing with black leadership that considers any focus on black responsibility and accountability to be itself a form of racism,” he said.

He expressed that the only way to move forward is to have these types of hard discussions.

“More than anything else, black underclass needs human capital, the values, the habits, the attitudes, the behaviors, that facilitate economic advancement, regardless of who gets elected,” he said.