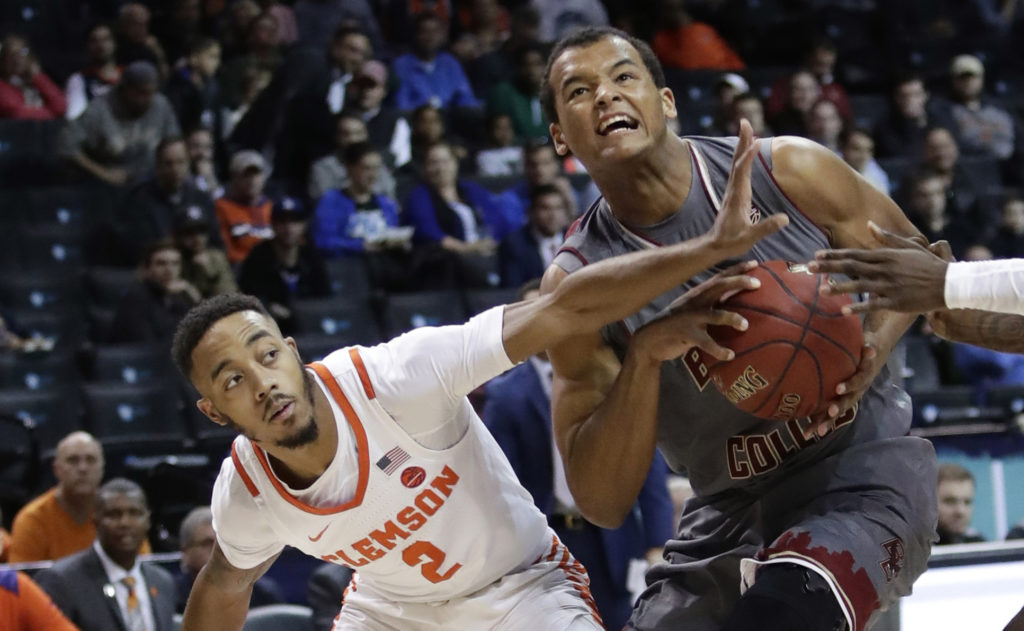 BROOKLYN, N.Y. — All of the talk surrounding Boston College men’s basketball the past two seasons, more so this week than ever, has been about Jerome Robinson and Ky Bowman—and reasonably so. Collectively, the All-ACC guards account for half of the Eagles’ total scoring output on a game-to-game basis. On Wednesday afternoon alone, the duo recorded 50 points in BC’s thrilling victory over North Carolina State.

But, for the first 28 minutes of Thursday’s ACC Tournament Quarterfinals, Robinson and Bowman were all but obsolete. Knowing that BC was playing its third game in three days, Clemson’s defense—the third-ranked unit in the conference—forced the Eagles’ ball handlers to run in transition and, once in the half court, take contested 2-point shots. Over the course of the first period and a half of play, the strategy worked to near perfection: BC’s backcourt tallied a measly 10 points during that span, recording just two field goals in the process.

Eventually, the NBA prospects shot their way out their funk, exploding for 33 points in the last 11 minutes and 11 seconds of regulation, at one point turning a 15-point deficit into a two-point game. The scoring spurt was enough to further the Eagles’ mini-Cinderella run—their defense, or lack thereof, was not. With just over four minutes remaining, Anthony Oliver II, who coming into the day had only logged four 3-pointers all year, drilled a triple to jumpstart an 8-4 run that practically put the game out of reach. As expected, BC, namely Bowman, went out with a fight, racking up 16 points in the game’s final stages, but the Tigers hit 14 of their last 16 free throws and held on for a 90-82 victory.

Even without the help of Robinson or Bowman, the Eagles (19-15, 7-11 Atlantic Coast) opened up the game on a 9-3 run, scoring the first seven points of the contest. Nik Popovic kicked things off with a spin move and finish in the paint. Moments later, Steffon Mitchell netted a 3-pointer from the left wing. Quite simply, BC’s frontcourt—which has arguably played its best basketball in March—picked up right where it left on Wednesday. It didn’t hurt that No. 19 Clemson (23-8, 11-7) couldn’t buy a basket on the other end of the floor.

Coming off a double-bye, the Tigers stumbled out of the gates, converting just two of first their 11 field goal attempts, including one of their first five triples. That’s not to say BC was playing lockdown defense—Clemson had its fair share of open looks and recorded a pair of offensive rebounds during the first five and a half minutes of the half, setting up a couple of second-chance scoring opportunities. Tigers head coach Brad Brownell knew that it was only a matter of time until the shots started to fall.

Right on cue, Clemson knocked down eight-consecutive field goal attempts, rattling off a 23-8 run. The Eagles’ perimeter defense—the fifth worst in the league—came back to haunt them, big time. All five of BC’s starters had a hard time closing out on outside shooters, frequently gravitating toward the paint, only to find themselves flailing toward the arc, desperately trying to contest long-range shots. By the end of the period, six Tigers netted a trey, and Clemson, as a team, racked up nine total 3-pointers, recording a 52.9-percent clip.

BC, on the other hand, went cold from the floor. After the Tigers strung together their momentum-shifting run, the Eagles went nearly five minutes without sinking a single shot. Just as the game was slipping away from head coach Jim Christian and Co., Jordan Chatman drained back-to-back 3-pointers—a sequence that revitalized BC’s offense. Exchanging buckets down the stretch of the half, the Eagles trimmed Clemson’s lead to seven, prior to the buzzer.

The tide had hardly turned, though. In fact, BC didn’t hit a shot for the first four minutes and 55 seconds of the second half. Meanwhile, Gabe DeVoe was feasting on the Eagles’ increasingly porous defense. The senior guard, who has emerged as one of the Tigers’ primary offensive weapons since Donte Grantham suffered a season-ending ACL tear back in January, scored from everywhere on the floor, notching a game-high 25 points. But he wasn’t the only one that had himself a day. Shelton Mitchell also eclipsed the 20-point mark, shooting 6-of-12 from the floor. Along with Marcquise Reed, the scoring tandem cruised to the midway point of the second half with a 15-point advantage.

But Clemson wasn’t going to get off easy—not on Robinson’s watch. The runner-up for the ACC’s Player of the Year award teed up a trio of 3-pointers in the span of less than three minutes, closing the gap to just eight. Then, his partner-in-crime came alive. Bowman scored 20 of his 23 points in the back half of the frame, working with Robinson to draw within one possession of the Tigers on two separate occasions. Both times, Clemson answered.

Bowman went down swinging, hitting shot after shot to prolong the inevitable. Soon enough, he fouled out, and the Tigers put the finishing touches on their monumental victory, booking a trip to the tournament semifinals.

The loss drops BC to 3-3 in its final six games of the regular season—a stretch that Christian believes was the most formative of the season.

With a potential NIT berth on the horizon, there’s still time for additional growth, both individually and program-wide—at least as far as the fourth-year coach is concerned.

“We won 19 games, we won nine games in this league—the best league in the country—we beat nationally ranked teams,” Christian said. “Again, I’m not on a committee that picks teams for postseason events, but … I think we made a pretty good case for a team that’s worthy of playing in the postseason and able to do well.”