On Wednesday afternoon, No. 14 Southern California held Sam Apuzzo in check for the first 34 minutes of play. The junior failed to tally an opening-half goal, and Boston College lacrosse entered the break trailing—both of which hadn’t happened all season. Eventually, Apuzzo etched her name in the scorecard, and BC rallied to win in overtime, but for a while its unblemished record was in jeopardy.

In the tail end of the Eagles’ trip out West, the nation’s leading scorer reverted back to her normal self, not only finding the back of the net in the opening frame, but also logging her fifth first-half hat trick of the season against San Diego State. When Saturday’s game was all said and done, Apuzzo racked up eight points, eclipsing the 200-mark in the process, and BC coasted to a 19-8 victory.

Apuzzo got on the board in a heartbeat. Following goaltender Lauren Daly’s game-opening save, the No. 2 Eagles (9-0, 1-0 Atlantic Coast) cleared the ball out of their own territory, setting up shop on SDSU’s (5-3) side of the field for their first offensive possession of the afternoon. Less than a minute later, Emma Schurr dialed up a pass for Apuzzo, who flung a shot past Aztecs goalie Katy Sharretts. The scoring play was just the start of a 5-0 BC run.

Approaching the 25-minute mark, Emma’s twin, Tara, notched a goal of her own, cashing in on SDSU’s first of 20 turnovers. Ten seconds after that, Apuzzo won the draw control and relayed the ball to Kaileen Hart, who then dished a pass to Elizabeth Miller. The defender made the most of the opportunity, logging her fourth goal of the year. In what was practically an identical series of events, Tara Schurr converted another SDSU turnover into points and Apuzzo beat Sharretts in a span of 12 seconds, capping the one-sided scoring spurt.

Finally, the Aztecs’ Morgan Taylor put one past Daly, a bit more than nine minutes into the game, to extinguish a potential first-half shutout. But the goal hardly built any momentum. In fact, neither team would score for the next 12 or so minutes. Back and forth, the teams traded turnovers and fouls, before Dempsey Arsenault scooped up a ground ball, and Sheila Rietano located Emma Schurr for her seventh goal of the season. Just about a minute later, Arsenault got in on the fun, ripping twine for the first time all day, upping BC’s lead to 7-1.

It appeared as if the Eagles were poised to increase the gap after SDSU’s Jill Haight was carded. Instead, the Aztecs, Kirstie Greenlaw to be more specific, scored, despite being a man down. The shorthanded scoring play jumpstarted a mini two-goal SDSU run. With under two minutes remaining in the half, Elizabeth Rourke assisted Taylor for her second and final goal of the frame. But, right on cue, the Eagles answered with a pair of goals in the final 30 seconds of the period, thanks to Tess Chandler and Apuzzo, to extend their lead back to six prior to intermission.

After recording a flurry of goals toward the end of the first half, both teams cooled off at the start of the second frame. In fact, the score stood at 9-3 for the first six minutes of the period. In order to regroup, SDSU head coach Kylee White called a timeout. Coming out of the break, the Aztecs drew a Miller foul, earning their first and only free-position shot of the game. Grace McGinty didn’t let it go to waste—the junior midfielder got the best of Daly, cutting SDSU’s deficit to five with her 12th goal of the year. All it took was a Hannah Hyatt ground ball, an Eagles clear, and an Apuzzo scoring play to restore BC’s commanding six-goal advantage.

Twice more, the Aztecs drew within five goals of head coach Acacia Walker-Weinstein’s team, but each time, the Eagles responded. Then, closing in on the 14-minute mark, Arsenault made her move, upping BC’s lead to seven—at the time, its largest of the contest. Greenlaw fired back with her second score of the day, only to see the Eagles rattle off six of the game’s final seven goals over the course of the remaining 13 and a half minutes of regulation.

Just like the beginning of the game, a Schurr sister, this time Emma, and Apuzzo teamed up to log back-to-back goals, separated by a mere 63 seconds. Apuzzo found the back of the cage once more, sandwiched in between a pair of Arsenault and Chandler scoring plays. Freshman Cailee Perettine put the the finishing touches on BC’s sixth double-digit win of 2018, using an Apuzzo pass to score the third goal of her collegiate career.

In the waning seconds of the game, Greenlaw corralled a ground ball and whipped a shot past Daly to make the final score a bit more respectable, but the Aztecs’ margin of defeat was no less decisive.

The win marked the fourth time this season that the Eagles have outscored their opponent by five or more goals in the first half. Of those four games, they have recorded three double-digit victories. When BC—winners of nine straight—gets going early, it’s practically unstoppable. 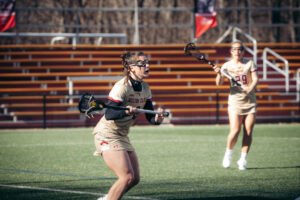