Home » With Sweep of Merrimack, BC Advances to Hockey East Tournament Semifinals 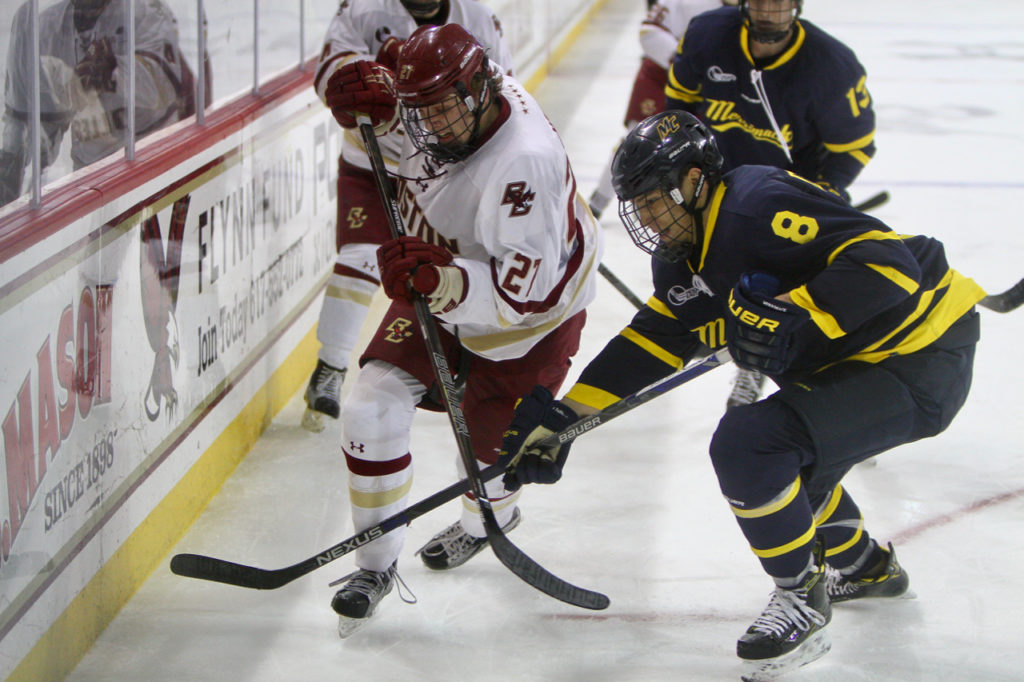 With Sweep of Merrimack, BC Advances to Hockey East Tournament Semifinals

The Eagles were outshot 70-35 in the two-night bout. In both games, goaltender Joseph Woll played like a superstar. In both games, when BC scored, it appeared as if head coach Jerry York’s team didn’t deserve a lead, but somehow found itself on top.

Saturday night’s 4-3 overtime victory wasn’t identical to Friday’s 1-0 final in every sense, though. Woll’s play was excellent, but instead of a shutout, the sophomore’s reward was a .916 save percentage. There wasn’t a single thing the netminder could’ve done about each of the Warriors’ three goals—all of them came off perfect deflections.

BC also showed significantly more offensive bite in Game Two than it did in Game One. In terms of shot attempts—which include shots that were blocked or went wide of the net rather than just shots saved or scored—Merrimack had the edge, 53-46, a relatively small margin and a much better representation of how well BC performed in the offensive zone.

What is strange about all those stats is they would seem to indicate this was an offensive shootout. That was certainly not the case through a period and a half.

The first frame picked up right where Game One left off: lots of Warriors chances, few Eagles scoring opportunities, and no goals to show for either team, thanks to excellent goaltending. Junior Merrimack goaltender Craig Pantano may not have the kindest save percentage to show for it, but he shut down plenty of BC chances. In the first, he was barely called upon, as the Eagles notched just five shots on goal, with the best chance coming from J.D. Dudek’s effort midway through the period—a shot that dribbled wide of the net since the puck bounced on the junior forward before he could take a whack at it.

On the other end, Woll stopped nine Warriors shots, while his defensive corps blocked six more. It wasn’t until BC came out for the second period that the tide began to turn.

Pantano was up to the task initially, nabbing three quick saves in the first six minutes of the second 20-minute segment. Soon after, Eagles co-captain Christopher Brown forced Pantano to lunge across his crease to make a pad save, keeping the game scoreless. But just as BC seemed to be seizing offensive momentum, Merrimack had its best chance of the game.

Warriors defender Ryan Cook got a shot off that David Cotton blocked for the Eagles, and the puck fell to Merrimack’s Derek Petti. The junior, who registered four shots on the night, quickly got two off on Woll, who made back-to-back left-pad saves to keep Petti off the scoresheet. The second shot generated a rebound for Warrior Ludvig Larsson, but again the puck trickled away and prevented a forward from capitalizing on an apparently open net.

Yet it was only a matter of time before the puck bounced the right way, for BC that is. Mike Booth, inserted into the lineup for this game in place of an injured Graham McPhee, won a faceoff in the offensive zone, got the puck back from Logan Hutsko, and ripped a shot past Pantano to open the scoring with his first goal of the season.

Once Woll grabbed three more saves on his end of the ice, Dudek finally managed to control the puck. Following a faceoff victory, the forward received a pass from Christopher Grando, rung a shot off the post, and then put home his own rebound to give the Eagles their largest lead of the series.

It wasn’t long before Merrimack erased it.

The Warriors struck back immediately as a puck deflected off Merrimack’s Johnathan Kovacevic into the net to reduce the deficit to one. The Warriors kept the pressure on BC for the rest of the period, going on an 8-2 shots on goal run to close out the period. That pressure eventually led to the Eagles’ first penalty of the game, as Cotton went to the box for roughing with 51 seconds remaining in the frame. It only took 20 more for Ludvig Larsson to deflect home a Sami Tavernier shot to tie the game.

The third period began quietly, until Logan Hutsko broke out on a 3-on-1 opportunity, four minutes in, and his saucer pass to Julius Mattila restored the Eagles’ one-goal lead. A couple minutes later, Aapeli Räsänen was sent to the sin bin for holding, but this time BC’s power play held strong.

Räsänen would go on to hit a post, Ludvig Larsson and Dudek would force more saves from the opposing goaltenders, but it was a final deflection that would send the game into overtime. Alfred Larsson picked out Tyler Irvine, as the Warrior cut to the net, tying the game at three apiece.

Overtime got off to a much quicker start, but again followed the same patterns the Eagles and Merrimack had established throughout the series. Tavernier found himself on a breakaway opportunity, and he drew a hooking penalty on Casey Fitzgerald.

Just as it seemed like the Warriors finally had the puzzle piece to take their first lead of the game and force Game Three, Connor Moore poked the puck free in the neutral zone, and Grando pounced on it, took a slap shot with defenders draped on him, and scored for the first time since Nov. 11.

Game over, series over. Somehow, BC topped Merrimack yet again, for the 12th time in 13 Hockey East playoff games.

Its reward? A trip to TD Garden to face off against Boston University. The Eagles may have dodged a bullet, but their next destination could very well call for an even greater escape.