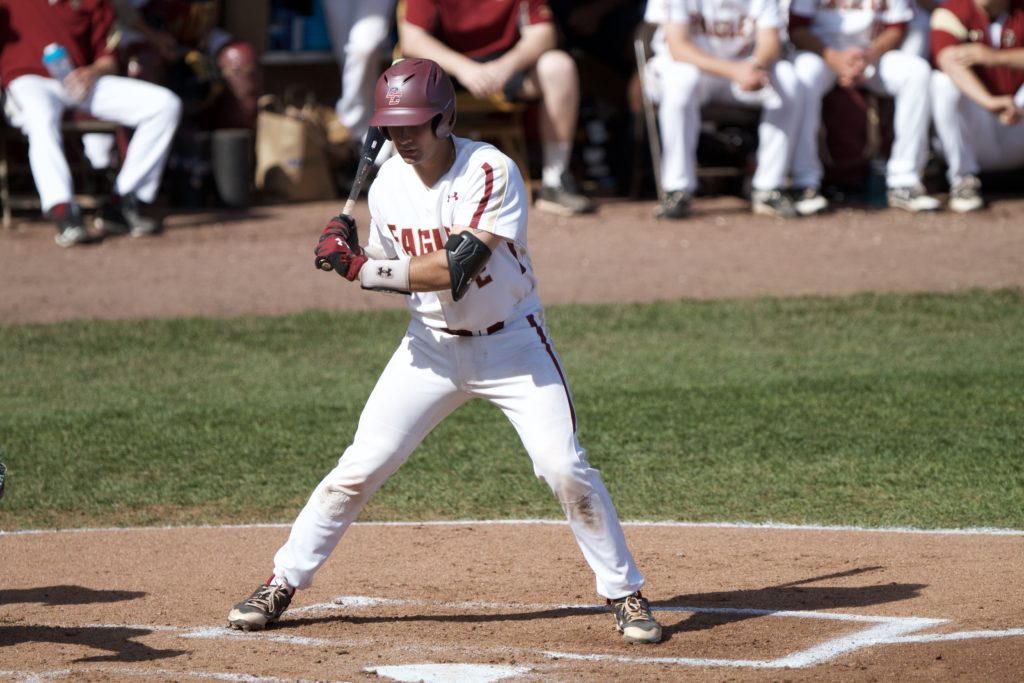 After another Nor’easter that postponed last Tuesday’s home opener against Holy Cross, Boston College baseball hit the road again for its second conference series of the year against Virginia. Despite further pitching struggles, the Eagles won their first game in Charlottesville in program history before dropping the next two.

In the series finale on Sunday, the Eagles rallied from an early deficit, but their bullpen cost them, blowing lead after lead before faltering, 10-9, in extra innings.

No. 21 UVA (13-7, 3-3 Atlantic Coast) struck first in the bottom of the second, with Nate Eikhoff leading the inning off with a solo shot to right center. Then, with two outs, Devin Ortiz drove in Alex Tappen with a single, and an inning later, with two outs and runners on the corners, UVA executed a double steal, as Eikhoff took second and Andy Weber raced home to put the Eagles (7-10, 2-4) in a 3-0 hole.

BC would rally, chasing Cavaliers starter Evan Sperling in the fourth with four runs to take the lead, all with two outs. Sperling hit two batters and Brian Dempsey brought in a run with a single to put the Eagles on the board. Mitch Bigras followed that with an RBI double and Jake Palomaki plated two more on a single and an error, ending the day for Sperling.

BC’s two-out magic continued in the sixth. With runners on the corners, Dante Baldelli came through with a clutch RBI single, then the Eagles returned the favor with a well-executed double steal as Palomaki scored.

BC’s bullpen couldn’t hold on, though. Reliever Thomas Lane surrendered a two-run double to Brendan Rivoli, then replacement Sean Hughes gave up another—this one to Tanner Morris—which put the Cavaliers up one.

UVA took the lead into the ninth, entrusting Andrew Abbott to finish it off. The Eagles, however, didn’t go down quietly. Chris Galland reached on a one-out single and stole second base, then scored the game-tying run to force extra innings after a Weber error.

The Eagles were in business in the top of the tenth, as Palomaki led off with a single and moved to second on a sacrifice bunt, bringing the powerful Gian Martellini to the plate. Martellini took the first pitch he saw from Abbott and sent it over the right field wall to put BC ahead, again.

BC brought Jack Nelson on to close it out for the save, but he was unable to record a single out. Nelson imploded, hitting Ortiz, giving up a single to Morris, and allowing Justin Novak to reach as he couldn’t field a sacrifice bunt. Matt Gill came on and didn’t fare much better, as Weber tied the game with a two-run double and Charlie Cody walked it off.

Sophomore Dan Metzdorf took the ball for the Eagles in the middle game of the series on Saturday, opposing Virginia’s Daniel Lynch. The Cavaliers got off to a fast start in the bottom of the first, stringing together three hits, including a two-out RBI single by Eikhoff to plate the first run.

Although Metzdorf would go on to pitch four shutout innings, it ended up being a tough day for BC’s bullpen. Redshirt freshman Joey Walsh was the first arm to appear and he struggled with his command, allowing the first two batters to reach on a hit by pitch and a walk. After a sacrifice bunt that moved both runners into scoring position for the first out, it was Tappen with a productive out, grounding to shortstop while scoring the runner from third to extend the lead.

Next out of the bullpen for the Eagles was junior right-hander John Witkowski in what would be a disastrous seventh inning. A wild pitch and an overthrow from Alu on a sacrifice bunt brought in another run, yet Witkowski’s replacements failed to control the game any better.

Caleb Knight’s double off Brendan Spagnuolo gave Virginia a 4-0 lead and forced BC to bring in Zach Stromberg with the bases loaded and nobody out. Stromberg’s first pitch skipped to the backstop to score Weber, and Virginia’s Cody capped off the huge inning by bringing home two more. Four different BC relievers combined to allow five runs in the inning.

On the other side, Lynch was absolutely dominant for the Cavaliers and shut down BC’s lineup all afternoon. He went 7.2 shutout innings, allowing just four hits and two walks while striking out 11. The Eagles were only able to begin a rally with two outs in the ninth inning against Kyle Whitten. Bigras prevented the shutout with an RBI single to center that advanced runners to second and third after a bobble by Ortiz in center field. Virginia’s bullpen issued three consecutive walks leading to two more runs for BC, but Andrew Abbott shut the door for a 7-3 win when Scott Braren struck out for the fourth time on the day with the bases loaded as the tying run to end the game.

The Eagles sent their ace Jacob Stevens to the mound in the Friday afternoon opener against Virginia’s Derek Casey, and it proved to be a historic day at the ballpark—BC pulled away in the seventh inning for a 6-2 win, the program’s first ever in Charlottesville.

Stevens was his usual self and kept the Cavaliers’ bats fairly quiet, but he ran into trouble in the third inning. A two-out triple down the first base line scored Morris, yet Stevens wouldn’t allow another run, going six strong innings while striking out five.

The score remained tied until the seventh inning when BC’s Jack Cunningham hammered a double off the center field wall to bring home Galland. Soon after, Palomaki grounded one past first base to score Cunningham and end the day for Casey. Martellini capped off the inning with a two-run blast over the left field wall, putting the Eagles up 5-1.

The Eagles tacked an insurance run in the ninth on an RBI single by Palomaki, and Lane came on in the bottom of the ninth to close it out with a comfortable lead. Although he struggled with his control, surrendering three walks and a wild pitch that led to another Virginia run, Lane limited further damage and secured the win.

While the Eagles managed to take one of the three games, their sloppy defense and command struggles in the bullpen contributed to many self-inflicted wounds that allowed Virginia to put runs on the board. Overall, BC can find plenty of positives from the series, though, as it recorded its first ever win at Davenport Field against a ranked conference foe.