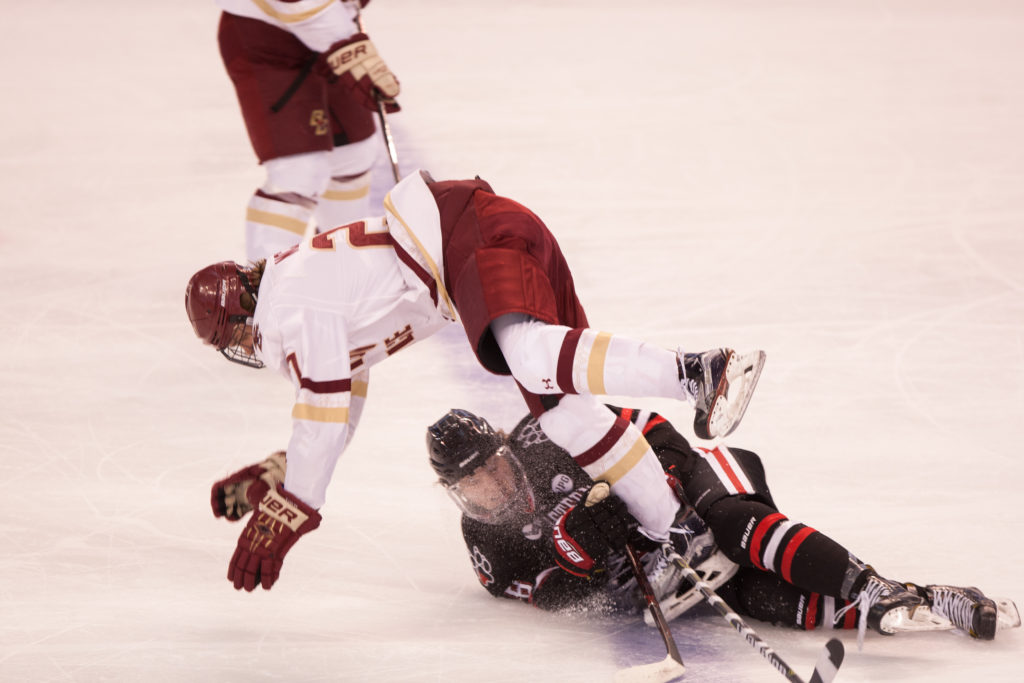 When you look back at the 2017-18 Boston College men’s hockey season, you’re left grappling over two stances upon reflection. On one side, you have Jerry York claiming yet another Hockey East Coach of the Year award, guiding a youthful roster to a regular season title and a semifinal appearance, a far cry from the forecasted fourth-place finish. On the other is the fact that the Eagles, a storied program by any standard, failed to advance to the Hockey East final for the fifth time in the last six years and missed the NCAA Tournament for the second season in a row as a result.

You can pick either side in the debate over whether the season was a success or a disappointment, but setting that aside, several facts remain.

One is that many expected a rebuilding year of sorts for York’s team, in large part due to the lack of a senior on the roster. Another is that the year—even if postseason success was minimal—could be characterized as hugely important in the development of the roster. Logan Hutsko stands out, as the freshman went 89th overall in the NHL Entry Draft after a successful debut, but several other players took steps forward. The likes of Jacob Tortora, Chris Grando, and Aapeli Räsänen are among those who stood out and should continue to thrive moving forward alongside the leadership of Casey Fitzgerald, Christopher Brown, and J.D. Dudek.

Breaking down the season further begins with the fact that while the Eagles did come away with the regular season title, there wasn’t much question about who the best team in the division was—or even who numbers two and three were. Northeastern, rival Boston University, and Providence combined to go 5-3 against BC, and it’s no surprise that the trio found themselves in the NCAA Tournament—with the Terriers and Friars each winning a game.

It just showed that, even though BC may have overperformed to claim the regular season title, it never truly held much over the other three—in fact, it lost its last four matchups against those teams.

The rest of the year featured a steady stream of highs and lows. The campaign started woefully, with BC going 1-5-1 in a largely non-conference slate—a category of the schedule in which it ultimately failed to record a single win. After splitting with Providence, the Eagles were steamrolled by the likes of Denver, St. Cloud State, and Wisconsin, three then-title contenders that were seemingly miles ahead of BC at the time.

York found a switch with his roster, though, and expectations rose again on the strength of an impressive seven-game winning streak, one punctuated with in-conference sweeps against physical opponents in Merrimack and Vermont before a win over Northeastern.

Still, things never truly gelled after that. Sure, BC went on to claim the Hockey East regular season title, but the path to it was steeped in disappointing turns—the Eagles even flamed out of the Beanpot, winless, for the second year in a row. The embarrassing two-game stretch included a consolation game loss to 28th-ranked Harvard that secured a non-conference slate without a single win, a fact that called into question the Eagles’ final regular season rank of 16.

Overall, a late push took them to the Hockey East semifinals and arguably a win away from reaching the NCAA Tournament, but you’d be hard-pressed to find fans of the team that would feel very confident in the postseason play. There was a clear separation between the Eagles, the three Hockey East teams that advanced, and even arguably a good chunk of the rest of the bracket.

Excitement should still reign on the Heights, though. A youthful team has been through a tough non-conference slate, has seen the big stages, and now is poised to take another step forward. Oftentimes, young teams are all positioned the same by media and fans—they have shown flashes of the talent, they have grown, and should be quite a bit better. For the Eagles, this seems true. Hutsko is an NHL talent that only impressed as the season went on, and he’ll be joined by a strong returning corps, as well as a group of freshmen that casually includes the 11th and 63rd overall picks of this year’s entry draft—Oliver Wahlstrom and Jack McBain.