Home » After a Few Strokes of Luck, Evelyn’s in the Running
Features

After a Few Strokes of Luck, Evelyn’s in the Running

Unlike most, Evelyn Rakowsky, MCAS ’18, has always loved running. She started as a kid when her mother would take her to a trail near their home, but while her mother has always enjoyed running, she wasn’t a competitive racer.

“I ran with my mom until I got faster than her,” Rakowsky said with a laugh.

Now she runs with her sister, a freshman basketball player at Catholic University. Although they are apart for most of the year, they make time to run together when they are both home—most recently, over Easter Break. Rakowsky has found that exercise has been powerful in helping her form connections with other people.

“A lot of the friendships I’ve built through the years have come from cross country—or running-based relationships,” she explained.

She finds that running with someone is a good way to break up her workouts for her latest running endeavor: The Boston Marathon. When she’s going on her long runs, which have gotten up to 22 miles, she likes to run with a friend for the first segment, run in silence for the second, and then run with music to get her through the last third.

She knew that she wanted to run the Boston Marathon after she experienced it as a spectator freshman year, and then when she watched Stephanie Nekoroski, her freshman year roommate and MCAS ’18, run it sophomore year.

“Waiting for her at mile 21 was so emotional as a spectator,” Rakowsky said. “And that just further affirmed for me that I wanted to have that.”

She decided that senior year would be the perfect time to do it—she knew when she passed BC she would feel a strong connection to it, especially since she only has a few weeks left on campus.

Connection is a huge part of the experience for Rakowsky, as she wanted to have a strong attachment to the organization she chose to run with. When she heard of Back On My Feet, a national group that helps the homeless population find resources for employment and housing if they agree to run with the group three times per week for a month, she knew that it would be perfect for her.

She said that her summer internship last year at On The Rise, a day program in Cambridge for homeless or formerly homeless women, exposed her to and cultivated her love for working with the homeless population. Her passion for service has led her to commit a year to working with a program for adults with disabilities in Denver after graduation.

“I’m continuing a lot of the practices I learned through interning at On The Rise, and what it means to serve people that are marginalized,” she said.

Despite her involvement in service during college, it was actually one of her high school teachers who has served in the Peace Corps. that planted the idea of a year of post-graduate service in her head. He led the community service program in her school—something Rakowsky was very involved in. As time went on, he began to become one of her best friends and a grandfather figure. His involvement in community service made him a role model for Rakowsky.

During her time at BC, she has participated in the Arrupe International Immersion Program, of which she was a leader this year after being a participant as a sophomore.

“Arrupe definitely continued to affirm the importance of spirituality and service in my life,” she said.

Rakowsky’s faith is one of the things that she has been leaning on during her training: The week before Easter Break, she was still almost $3,000 shy of her goal.

“Fundraising for me has been more challenging than the training,” Rakowsky said.

She said that the thought of raising the money was worrying her so much one night that she struggled to fall asleep. When she woke up the next morning, she decided that she didn’t want to carry that burden through her day. She said a prayer to God, stating her trust that he would provide for this area in her life and allow this experience to be a joyful and exciting one.

Shortly after, Rakowsky heard from a friend of hers, who was asking if she had seen Pete Rodriguez’s, CSOM ’18, post on Facebook. He was selling marathon t-shirts, and donating some of the proceeds to Rakowsky’s organization.

“The shirts did so well a few years back that this time around I had a feeling they’d sell by the dozen, and when I was looking for a charity to donate the proceeds to the choice was obvious,” Rodriguez said. “If Evelyn supports it, so do I. Simple as that.”

Second, she received a call from her mother, telling her about a conversation she had with an old coworker who was the first to introduce her to running half marathons. As they caught up, chatting about their children, Rakowsky’s mother mentioned that her daughter would be running the marathon. Her coworker asked if she was running for a charity, and offered to do a company match—something that Rakowsky had been searching for, but had faced trouble finding.

Lastly, Rakowsky was the lucky winner of a March Madness bracket. In less than a week, she went from being incredibly stressed about the amount of money she had left to completely at ease and ready to just be excited about running the race.

“I think that prayer had a lot to do with it,” Rakowsky said.

Other than prayer, Rakowsky turned to her friends when things got difficult. She realizes the emotional investment that her friends have in her race, especially Nekoroski.

“She gets emotional when she talks about me doing it because she’s so excited,” Rakowsky said of her friend.

Nekoroski confirmed her passion for Rakowsky’s race: On the last day of long runs, she was in an Uber with Rakowsky in the way to Johnny’s Luncheonette for brunch. She said she started bawling and turned to her Rakowsky to tell her how excited she was for her to run.

She said it was Rakowsky who inspired her to run sophomore year—she hadn’t thought of it before, but seeing how much her roommate identified as a runner, she wanted to try it too.

Next year, when Nekoroski moves to Philadelphia, Penn., she wants to run the Philly Marathon as Rakowsky did the fall of her junior year.

She emphasized that apart from running, Rakowsky is an exemplary human being.

“Evelyn is probably the most patient and selfless person I’ve ever met,” she said. “It’s why she’s a great roommate, and why she’s so fantastic when setting goals for herself. People just naturally gravitate towards her because there’s something special about her where she can just connect with people on really deep levels.”

Nekoroski certainly isn’t the only person who holds Rakowsky in this high regard. Rodriguez as well called on Rakowsky’s personality and spirit as the reason for her success not only as a runner, but as a person.

“If you haven’t run into her yet, get going,” he said. “There’s a little over a month left before one of the best the Class of 2018 has to offer walks across the stage at graduation.” 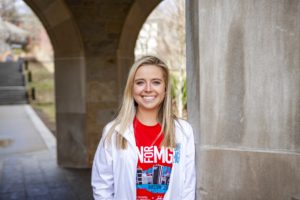 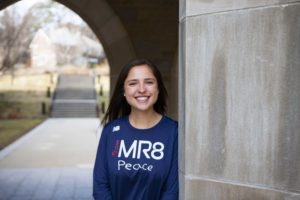