Home » How to Say Goodbye 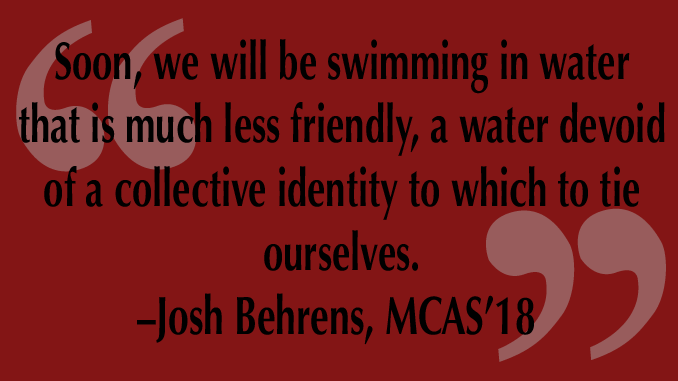 How to Say Goodbye

This is my last column for The Heights. Summing up my four years here in just 1,000 of my own words is impossible, so I’m going to rely on (read: semi-plagiarize) two pieces of writing that perfectly encapsulate my feelings about graduation. The first is “The Opposite of Loneliness” by Marina Keegan. Keegan was a Yale student who wrote for the Yale Daily News and penned “The Opposite of Loneliness” as her last Op-Ed for the paper right before she tragically died in a car crash just days after her graduation. The other is “This is Water,” a 2005 commencement address given by author David Foster Wallace at Kenyon College. This was one of Wallace’s only public speeches before his suicide in 2008 and is, in my mind, necessary for all college graduates to hear.

“The Opposite of Loneliness” focuses on an inscrutable feeling we all have in college. Keegan writes, “[the opposite of loneliness is] not quite love and it’s not quite community; it’s just this feeling that there are people, an abundance of people, that are in this together.” We, as seniors, are sad to leave the various little communities we’ve built over the past four years, like our a cappella groups, our roommates, our intramural wallyball teams that almost won a mug, that one group of friends you always see at pregames, etc., etc. But, Keegan points out that losing these individual communities isn’t the scariest part of graduation. The scariest part is losing a collective identity. Even if we sit alone in a booth deep in the depths of O’Neill, we are still a part of something bigger than ourselves. Boston College has been our home despite its many, many, many flaws. Keegan’s message is that losing our collective identity, however dysfunctional, will mean losing the “opposite of loneliness” we’ve come to expect as we are thrown headfirst into the unknown that is post-grad.

“This is Water” focuses on post-grad life. Wallace attempts to sober graduates up to the terrifying reality that lies after a diploma: The fact that, sometimes, life is completely and utterly boring. He tells a story about someone who needs to buy groceries after a long day at work to show how the monotonous cycles of adult life can crush a person’s soul beneath the weight of a thousand thoughtless routines. Monotony isn’t inherently bad, but rather a blank canvas on which we can paint meaning. The important part is to recognize the ‘water’ in which we swim—that is, the perspective we use to draw meaning from our experiences. I’ll quote at length here because it’s just that good:

“It will actually be within your power to experience a crowded, hot, slow, consumer-hell type situation as not only meaningful, but sacred, on fire with the same force that made the stars: love, fellowship, the mystical oneness of all things deep down. Not that that mystical stuff is necessarily true. The only thing that’s capital-T ‘True’ is that you get to decide how you’re gonna try to see it.”

Right now at BC, the “opposite of loneliness” is our water. Our environment is a campus where we are surrounded by thousands of fellow Eagles and it will be gone in less than a month. Soon, we will be swimming in water that is much less friendly, a water devoid of a collective identity to which to tie ourselves. This ending shouldn’t scare us, though.

Like Keegan says, we shouldn’t be afraid to “BEGIN a beginning.” This means beginning a beginning in a place far from the comfort of campus—far from late night mozz stix, and silly retreats you end up loving, and Father Leahy grass jokes, and pregames where you talk about Kant, and a thriving meme page, and Marathon Monday shenanigans, and thriving activist circles, and far too many a cappella groups, and the possibility to find your best friend around every corner. Damn, like that run-on sentence suggests, I’m gonna miss this place. So, behind all the rhetorical niceties of this column, I am scared to begin a new beginning because this beautiful beginning I started four years ago is ending.

Yet, endings shouldn’t define us. Both Keegan and Wallace died tragic deaths. Perhaps that’s one of the reasons I idolize their writing so much. Both Keegan and Wallace were amazing writers, but their writings are not good because of their untimely deaths, but in spite of them. Their stunning prose is able to stand on its own outside of their endings—and so too should our BC experience. Our time here will hold a special place in our memories for decades despite the seemingly tragic ending of graduation.

Like I said before my whole tangent, graduation shouldn’t scare us. Although we will no longer be plugged into the communal feeling here, life beyond the cap and gown is what we make of it. Or, as Wallace puts it, “You get to consciously decide what has meaning and what doesn’t. You get to decide what to worship.”

I don’t want to worship the “opposite of loneliness”—that feeling of being constantly surrounded and never alone. It has its perks in undergrad—as anyone running into what-feels-like-a-hundred friends in Hillside can attest—but it is not the reason my BC experience was beautiful, and I imagine the same is true for you. Worshiping something that is “not quite love and not quite community” is like eating only frozen dinners: It will get you through life, but you will never feel fulfilled. People who worship the “opposite of loneliness” collegiate experience turn into the pitiful BC alums who attempt to relive their glory days every tailgate season and alumni weekend.

No, the things that made my BC experience so amazing were those little personal moments not captured on an admission brochure or flashy BC promo video. It was that time I cried in front of 60 strangers on Kairos, or a long, solitary night in a Lyons practice room singing my heart out, or hearing about my professor’s new baby in office hours, or watching the sunrise over the Res after dancing all night with my best friends. These moments weren’t the “opposite of loneliness” like we feel in the middle of the Quad or at a football game, but love itself. And while we will no longer be surrounded by hundreds of acquaintances, it’s our post-grad choice to surround ourselves with close friends. It’s our choice to seek love.

Class of 2018, our graduation isn’t a tragic ending. It’s an exciting opportunity to dive into the opposite of the opposite of loneliness, into the water which lies beyond. I wish us way more than luck.