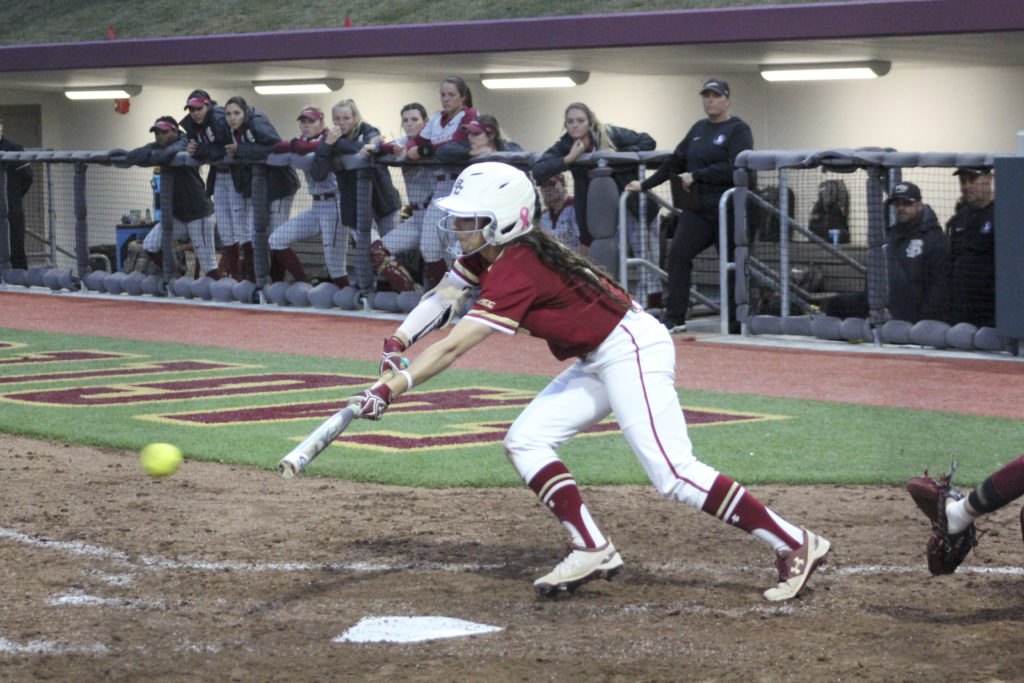 Last time out, Boston College softball watched an ACC series get away from it, to the tune of three-straight losses to Louisville. The perfect antidote to a potential slide? A non-conference game.

The Eagles moved to a perfect 7-0 in non-conference games since starting conference play, fighting off a late rally to down Massachusetts Lowell, 5-3, in a road game on Tuesday afternoon. BC (27-21, 11-9 Atlantic Coast) scored all five of its runs in the first two innings and played spoiler at the Riverhawks (19-23, 12-2 America East) home finale.

After giving up eight runs across her last eight innings against the Cardinals, Eagles workhorse Jessica Dreswick returned to the mound and went the distance, scattering four hits and three runs, two earned, in the win. She bookended the Louisville series with complete game efforts, continuing to establish herself in the BC record books—she now has 44 career complete games, 16 this year alone.

Dreswick was able to cool down a UMass Lowell lineup that was seeing the ball exceptionally well, having won seven in a row, as it was held without a hit until the fifth inning. Meanwhile, the Riverhawks pitching staff—which entered having not allowed a run over the last 14 innings—was greeted rudely.

Lexi DiEmmanuele led off the game with a single off of Riverhawks starter Lovina Capria and promptly stole second—her first of three stolen bases on the day. DiEmmanuele has continued to show off her speed with great frequency in the second half of the season, now boasting nine in her last seven games. The impressive stretch has vaulted her to third in the conference with 26 stolen bases.

Chloe Sharabba then drew a walk before DiEmmanuele swiped third, setting up the game’s first run when Annie Murphy laced a RBI single, one that extended her on-base streak to a remarkable 24 games. Emme Martinez chipped in a sacrifice fly, and the Eagles were right back at it in the ensuing frame.

Cami Sellers singled with one out, then Capria hit Chimento. A sacrifice bunt later, it was DiEmmanuele who came through with one out, grounding a ball back to the pitcher. Captria’s throw to first sailed high, scoring a pair of runs, and Sharabba followed with a single to push the lead to an ultimately unsurmountable 5-0.

It seemed, for much of the game, that Dreswick was going to send UMass Lowell to its first shutout since April 11, but the Riverhawks found a rally inside them. In the fifth, Maria Moccio singled to shallow left field to break up the no-hit bid, and a pair of outs later, was racing home after a Madison Alcorn triple. Alcorn would then come across on a Marianna Sparacia single, closing the gap to three runs.

Eagles head coach Ashley Obrest stuck with Dreswick, and she quickly found herself in trouble in the ensuing sixth inning—the product of a shaky defense behind her. After issuing a leadoff walk to Sara Siteman, Dreswick got Sydney Barker to ground the ball to short. Barker had the throw beat for an infield single, but Sharabba’s throw to first sailed, allowing Siteman to race around and score. It was another unearned run charged to Dreswick, who has given up one in each of her last three appearances.

The senior settled down, though, escaping the jam before working a scoreless seventh to send BC home with the win. After the first two frames, the Eagles offense completely disappeared, as the lineup seemed baffled by Riverhawks reliever Kaysee Talcik. Talcik spun five perfect innings, retiring all 15 batters she faced with ease, needing just one strikeout throughout to set them down in order. Unfortunately for UMass Lowell, what happens in the first two innings is equally as important as what happens in the next five, so the streak came to an end.

Even if it got tense at the end, BC has rattled off seven consecutive non-conference wins after going just 9-12 out of the ACC in the early going. These are games the Eagles need to be winning, and they’ve more than stepped up to do so. The latest conference series was a setback, without a doubt, but knocking off a red-hot Riverhawks team is an obvious first step on getting momentum back heading into the final conference series of the year—a three-game set with Georgia Tech, which boasts a comparable conference record.