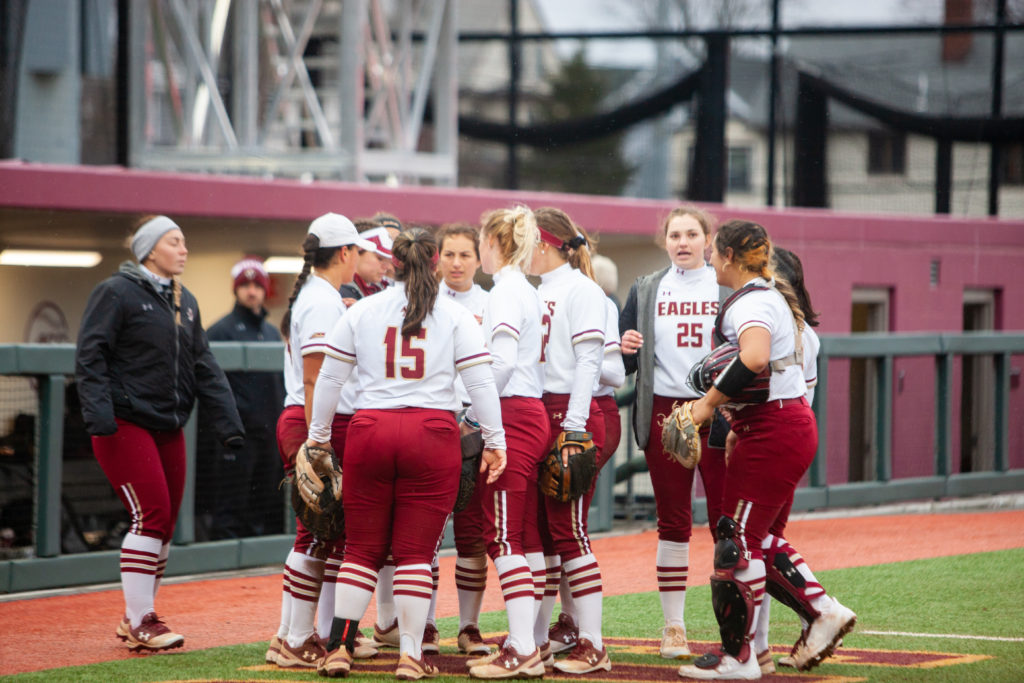 About two weeks after Boston College softball was swept by ACC bottom dweller Pittsburgh to close out the 2019 campaign on a three-game losing streak, miss out on the conference tournament, and finish with the program’s worst record (18-35, 4-20 Atlantic Coast) since 2013, head coach Ashley Obrest’s, BC ’07, tenure has come to an end.

On Tuesday, Director of Athletics Martin Jarmond announced that the former Eagles catcher resigned from her head coaching position. Assistant coach Megan Brown will serve as interim head coach until Obrest is replaced.

“We thank Ashley for her eight years of hard work and service in leading her alma mater,” Jarmond told BCEagles.com. “We wish her all the best during the next chapter of her career.”

Although Obrest never led BC to the NCAA Tournament, she did string together five straight winning seasons, four of which saw the Eagles eclipse the 30-win mark. After starting her BC coaching career with a pair of shaky campaigns, where the team managed just a combined five ACC victories, Obrest righted the ship in 2014. BC recorded 30 or more wins for the first time in six years, and players like Nicole D’Argento and Tory Speer set the stage for years worth of excitement.

Obrest experienced her most success with a pool of recruits making up the classes of 2016, 2017, 2018, and 2019. Jessie Daulton and Megan Cooley, both BC ’16—who posted the ninth and 11th-best career batting average in program history—played a major role in the Eagles getting over the hump and wrapping up the 2016 season with an above .500 record in ACC play. But the stars that made up the bulk of Obrest’s stay were just on the horizon.

Tatiana Cortez, BC ’17, was a mainstay in the Eagles’ lineup for years. When all was said and done, she ended her Eagles career with the most home runs (47) and RBIs (174), second-most walks (107), fifth-highest batting average (.313), and the highest slugging percentage (.679) in the BC record book. Then there was Chloe Sharabba and Annie Murphy, both BC ’18.

With Cortez, they formed the base of the Eagles’ lineup during Obrest’s heyday. Murphy, who earned All-ACC First Team honors as senior, clocked out with the second-highest batting average in school history (.327). Sharabba—also a renowned shortstop—wasn’t too far behind with a .312 clip, ranking sixth all-time. To top it off, Lexi DiEmmanuele, BC ’19, provided BC with a bounty of speed—she holds the program record for most stolen bases (98)—and, at times, was the lineup’s best contact hitter.

What made BC so dangerous during this stretch, however, was its presence in the circle. The tandem of Jessica Dreswick and Allyson Frei, both BC ’18, might just go down as the most dominant pitching duo to ever wear BC uniforms. In their final year on the Heights, Dreswick and Frei teamed up to start 53 games, account for 362 1/3 of the Eagles’ 363 innings pitched, and strike out 325 batters.

Dreswick—the only pitcher in school history to throw a perfect game, as well as a no-hitter in ACC competition—rounded out her time in Chestnut Hill with the program’s most wins (59), innings pitched (675.1), and its sixth-best ERA (2.64). Frei was right with her, and could have been even closer had she not suffered an undisclosed season-ending injury in 2017. The righty finished with the program’s fourth-most wins (46), fifth-most innings pitched (522), its seventh-best ERA (2.71). Put simply, together, Dreswick and Frei were a sight to see.

At the time, BC had enough talent to beat anyone in the ACC, perhaps best exemplified by the Eagles’ program-record-breaking 13-game win streak in 2018—one in which the team outscored its opponents, 85-22, and defeated then-No. 13 Florida State for the first time since 2008.

The problem was, BC never seemed to carry its momentum into the ACC Tournament. In fact, the Eagles failed to win a single conference tournament game with Obrest as head coach, notably losing to Notre Dame three times in the opening round. Actually, BC’s last ACC Tournament win came back in 2007 when Obrest herself was calling pitches behind the plate.

Without Dreswick or Frei—who went on transfer to Virginia for her final year of eligibility—and the core of the Eagles’ lineup, the wheels came off in 2019. Aside from DiEmmanuele, who rode a .352 batting average to a spot on the All-ACC Second Team, along with Emme Martinez, and a respectable season from Allyson Moore, BC didn’t have nearly enough firepower to contend in the ACC.

Obrest ends her BC coaching career with a 200-219 record, including a 66-113 mark against conference foes. While she was able to turn her alma mater into a legitimate ACC force, her success never extended beyond the regular season—her successor will be tasked with taking that next step.