Home » Solving the Greatest Mystery at BC 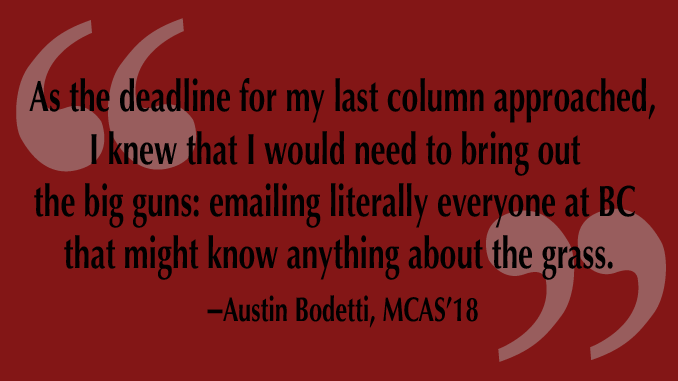 Solving the Greatest Mystery at BC

Over the course of this semester, this column has brought you the answers to questions that no one has ever cared to ask, establishing a standard of investigative journalism that The Heights has never met before and never will again. Now, no one will ever have to ponder these mysteries:

That last question is just a link to my email list, Lost with Austin (AUSTIN), but I count answering it as solving one more mystery. Wow. I can conduct investigations in my sleep.

I knew that my last investigation would need to top the others. In fact, it would need to surpass anything that The Heights had ever published, but, conveniently for me, The Heights has set an extremely low bar. I chose to determine how much money Boston College spends on grass every year.

Google told me that The Heights had never even attempted to answer this question before. Given the controversy surrounding the grass—BC resods lawns across campus in what many students assume to be an expensive enterprise—I would have thought that one columnist or another would have looked into it. Not for the first time, however, my expectations for The Heights had proved far too high.

In my four years at BC, I have heard several variations of the same rumor: A donor allocates a certain amount of money to the University every year with the condition that BC can only spend it on grass. Meanwhile, one acquaintance told me that local landscapers reapplied the sod without having to pay a single penny because those landscapers see it as free advertising.

In one highly specific anecdote, a student explained that the parents of a rejected Chinese applicant to BC offered to cover all the University’s costs for landscaping in exchange for that applicant’s acceptance. That story, though, sounds both highly illegal and slightly racist. I knew that I could only get the truth from BC administrators, who might not take my grass-themed emails seriously.

At first, I emailed University Spokesman Jack Dunn. He had helped me conclude my missing-plate investigation, so the Dunnster—as I’ve taken to calling him—seemed a natural place to turn in my time of need. He answered neither my initial email nor the follow-up, however, bringing our friendship into doubt.

As the deadline for my last column approached, I knew that I would need to bring out the big guns: emailing literally everyone at BC that might know anything about the grass.

My email reached about a dozen staffers for the Budget Office, Campus Landscape Services, Facilities Management, and the Office of University Communications. The two respondents pointed me to Scott H. McCoy, associate director of Landscape Services.

“Thanks for the inquiry,” McCoy told me in his timely reply. “It’s always a heavily discussed topic this time of year. It’s not appropriate to share the details related to the cost but I can assure you that it’s a lot less money than most would think. I think the relative size of the operation and disruption to campus is somewhat misleading as it gives the impression that it’s a costly project but pales in comparison to much of what goes on here on a daily basis.”

Most student estimates of how much BC spent on sod range from several hundred thousand to over a million, but I was about to discover how wrong they were.

“The managed turf areas on campus are roughly 3.8 million square feet and and typically we’ll replace just 1.25 percent of that in the spring which is generally the byproduct of the damage caused by de-icing materials used throughout the winter months,” McCoy continued, telling me more about grass in one short email than I ever could have hoped to know in two lifetimes. “The funds are drawn from a yearly operating budget set up for landscaping materials and supplies. The sod is grown at a farm in Rhode Island and installed by a contractor based in Waltham.”

Based on McCoy’s math, BC replaces 47,500 square feet of sod every year. According to the website Sod God, meanwhile, professionally installed sod costs 46 cents per square foot. In other words, BC appears to spend between $6,650 and $28,500 on grass every year.

I wanted a scandal. Sure, there are likely other factors that could drive up the annual price of the grass, but it still costs less than one student’s tuition. How? How?!

Climate Justice, that ill-fated, extremely ineffective BC club, had wished me luck in my quest to discover the truth, but I still wonder whether the truth has actually been discovered. BC spending less than $10,000 on grass every spring sounds too ridiculous to be true.

When I posted, “How much money does BC spend on grass every year?” to the sticky-note question wall in O’Neill Library, the response basically quoted McCoy’s word for word. Perhaps it’s just my extreme paranoia, but perhaps not: I sense a conspiracy afoot.

My time at The Heights has come to an end, thank God, but I hope that The Heights will ignore its better judgment and pass the torch to someone else, someone who will get the real truth about the grass.