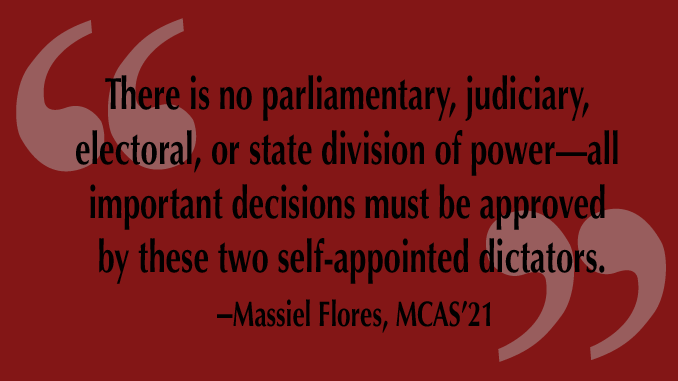 A journalist was shot and killed by a policeman before our very eyes on Facebook Live late last month. We could not stop crying upon seeing our own policemen and armed government thugs kill dozens of college students our own age, video after video, over a few days. What happened? Where did things go wrong in just five days? Nicaragua had the fastest growing economy in the region and was ranked the eighth best destination by Travel and Leisure Magazine in 2017.  All seemed well enough to continue to progress until the government started killing college students for speaking out against their regime. So far, there have been 63 deaths and the numbers keep increasing as the missing turn up dead.

But all was not well during the last 11 years. All government offices had been forcefully taken over by President Daniel Ortega and his wife, Rosario Murillo, who is now vice president. There is no parliamentary, judiciary, electoral, or state division of power—all important decisions must be approved by these two self-appointed dictators.

In the ’80s, Ortega took over Nicaragua after the Sandinistas overthrew Anastasio Somoza, the dictator at the time. Their socialist propaganda convinced even themselves that they were popular enough to hold free democratic elections in 1990 as a way to legitimize their power and get the USA off their back. Ortega ran for President again in 1996 and lost, but continued to vie for power as the leader of the opposition. In 2001, He ran again  and lost again. Then, in November 2006, he finally was able to manipulate the electoral system enough to become president in January 2007. He would never again make the same mistake of 1990 and hold free and clear elections. He started to restrict the election process by consolidating power over the electoral system, one branch at a time, until he had control of every corner of the government. He also changed the Constitution, which stated a president could only hold office for two terms, and allowed himself the chance to be “re-elected” for as long as he chose.

He then created a series of “public/private” companies with Hugo Chavez under an umbrella corporation called ALBANISA, that funded many of their local purchases, such as most of the TV and Radio Broadcasting companies, in order to control public communications. They continued to invest in energy, banking, hotels, publishing companies, etc., and he appointed seven of his children to influential government positions, which gave them control of several government businesses including ports, airport and customs, foreign investment promotion office, and communications. With hopes of a real democracy gone, most Nicaraguans had become dormant when it came to discussing this issue.

On April 16, Ortega passed a social security reform that increased payments and instituted pension cuts to existing pensioners in an attempt to save the National Social Security Institute (INSS), which has accumulated a huge amount debt over his time in office. On April 17, a large group of pensioners started a peaceful protest and were attacked by police. This led to more protests in the days following that consistently grew larger as more students and citizens joined. Police forces and government thugs punished the protesters more harshly each day, up to the point of using firearms against the protesters.

Ortega was out of the country at that time, but his wife shut down the TV broadcasters that had turned against the government. Public outrage grew, and government forces continued murdering students. By this time, the demonstrations were no longer about social security reform, but about democracy and the freedom of speech that had been taken away from the Nicaraguan people.

Murillo then went on National TV and stated, “These minuscule groups, with minuscule agendas and minuscule thinking and even more minuscule conscience, know that they will not alter the course Nicaragua has moving forward … always beyond. That is our commitment and our tribute to the victims of hate from these groups, I say minuscule, mediocre!” After three days of chaos, Ortega finally emerged and delivered a similar speech  accusing the students of violence and treatening persecution.

That day, the government instructed police to help Ortega supporters loot supermarkets to create more chaos and to blame the general public of this violence in order to install a state of military siege. The general public, however, tried to protect the supermarkets, taking away the stolen materials from looters and returning them. All of this is evident in the videos that became viral (search #sosnicaragua for all videos).

Upon returning to the country, Ortega was completely out of touch with what had been happening. But the greatest miscalculation that Ortega, Murillo, and most dictators this century have made is to assume that they could control public information and confuse the public with their doublespeak. Just like in George Orwell’s 1984, they talk of peace and reconciliation but threaten and offer violence to any opposing view. Nonetheless, they could not control mass media. Thousands of cell phone cameras were live-streaming and sending videos that quickly became viral, showing that the true provokers and aggressors were the police and the government thugs—the unarmed students were being beaten and killed before the entire civilian population that was tuning in through the internet.

Reporter Angel Gahona, a loving husband and father of two children, was killed while live-streaming the scene on Facebook. His coworkers reporting on the situation have declared that the killer was a policeman, who shot Gahona in the head. But true to their cynical double-speak, the government continues to twist the truth by writing that “he was killed by violent protesters who have sowed chaos throughout the country” despite all the witnesses and reporting crew that have stated the opposite.

On Sunday, April 22, Ortega went on national TV proclaiming that the Social Security Law needed to be reformed. By then, around 28 students had been confirmed murdered by his orders. Today, the count is at 63, in addition to over a thousand injured and dozens still missing.

On April 23, hundreds of thousands of Nicaraguan Citizens (the Catholic Church estimated a million country-wide in a country of 6 million people), joined together in the capital city of Managua to peacefully march in unity as a statement of rejection toward the corrupt president and, most importantly, a statement that Nicaragua will no longer allow their government to mistreat its people (100% Noticias). The general chant was a call for the Ortega Family to leave government office, since we cannot have murderers leading the country.

Being here at BC, there is a sense of frustration and anxiety. Fortunately, all of our families are safe, supporting Nicaragua. There is a sense of disconnect in being physically away from our homeland, feeling a strong urge to be back with our families and alongside our country that is currently fighting for our freedom. Due to our faith and supportive friendships, however, we have been able to find comfort in the BC community, with many helping organize a vigil on May 1 in the Stokes Amphitheater in order to honor all those who have lost their lives fighting for peace and those who continue to do so. We urge you to keep our small, humble, and brave country in your prayers.