In the bottom of the first inning of a scoreless game against Louisville, Boston College baseball’s Chris Galland grounded a ball to short and was thrown out at first in a bang-bang play for the inning’s second out. Eagles head coach Mike Gambino was quick to emerge from the dugout, asking for a challenge—surprisingly early, by any measure.

Still, with Cardinals southpaw Adam Wolf on the mound, it wasn’t entirely unexpected.

“I even said to the umpire, ‘I know this is an awkward time to challenge but this kid might be our best chance to score a run,’” Gambino said after, explaining his respect for the Louisville junior. “That just shows how good that kid is, you make an awkward challenge in the first, right off the bat.”

Gambino’s evaluation of the lefty didn’t disappoint. The challenge was denied, and Wolf went on to strike out 10 over eight one-run innings, lifting the Cardinals to a 6-1 win over a BC team that committed a season-high five errors and managed just one run. It was the ninth loss in the Eagles’ (15-29, 6-19 Atlantic Coast) last 10 conference games, a tough stretch that has all but pushed them out of the playoff picture.

It’s a stark contrast to last season, when the second half of the year featured win after win, the product of fighting through a front-loaded schedule and surging to the finish line. This year, the difference has been one of execution—Gambino hasn’t seen his team playing the way it needs to be playing

“We’re more focused on playing baseball the way we want to be playing it,” he said. “Playing hard and taking care of all the little things is what we’ve been so good at the last four or five years. Those are the things that got us in trouble and what we’re focusing on.

BC starter Jacob Stevens continued to deal with command issues, walking five in just four and a third innings of work, allowing four runs in another shaky performance. The right-hander hasn’t recorded a win in six-consecutive starts, walking four or more in four of those outings. He coughed up a solo home run, danced around trouble several times, and eventually exited in his third-shortest start of the season.

He was more than outdueled by Louisville’s (31-14, 11-11) Wolf, who entered having thrown some of his best baseball as of late and didn’t disappoint. Wolf, who emerged as the Cardinals top starter after being used exclusively as a reliever his first two years on campus, retired eight of the first nine hitters he faced and had electric stuff throughout. The junior struck out 10, one shy of the season high, and allowed just one run on three hits over eight impressive innings.

Wolf needed just 47 pitches to work through the first four innings, while his counterpart, Stevens, doubled that, entering the fifth inning already having thrown 74 pitches—almost half of them balls. One of those pitches, in the second inning, was launched to the hill beyond the left field fence off the bat of Cardinals center fielder Josh Stowers, handing them an early 1-0 lead.

Stevens would strand a runner on third in the third inning, then left the bases loaded—all reaching via walks—in the fourth, thanks to a timely lineout to first base that doubled off the runner. He wasn’t so lucky in the next inning, though, continuing to struggle mightily with his control.

Stevens gave up a leadoff single to Louisville No. 9 hitter Justin Lavey, then, after a sacrifice bunt, walked Jake Snider before Devin Mann singled in a run. The cleanup hitter, Logan Wyatt, chipped in a two-run double as he crushed a ball to the right-center gap, skipping on the warning track and up off the wall. That was enough for Gambino to go to the bullpen, where John Witkowski found early success.

He struck out Stowers, who blasted the solo home run earlier in the day, then induced an inning-ending groundout. The first two runners reached against the Eagles junior in the fifth, but he responded by setting down the next six Louisville batters in order—two by the way of the strikeout.

His second time through the lineup didn’t go as smoothly. Drew Campbell, who had singled off of him in the sixth, found himself at the plate with a runner on first after a throwing error. The sophomore right fielder had hit just one home run in 38 games played but looked the part of a seasoned slugger, pulling a two-run shot to right field.

BC finally managed to crack Wolf in his eighth and final inning of work, as Dante Baldelli lined a one-out single up the middle. Three batters later, with a Jake Palomaki walk in between, Baldelli was racing home after a RBI single from Jack Cunningham—who was 0-for-3 on the night—to the right of the second base bag.

Any hope at a further rally was quickly quenched, though, as Gian Martellini struck out for the third time of the night. The game ended in a whimper, too, as Louisville reliever Liam Jenkins took the mound and struck out the first two batters he faced before getting a game-ending groundout.

The loss was painful for many reasons—Stevens didn’t look like the Friday night staff ace, the lineup managed just three hits all game, the defense had its moments but still piled up five errors, and the loss makes a postseason appearance even more unlikely. Still, Wolf is a MLB Draft prospect, and it wasn’t entirely unsurprising in the context of the late season slump. These next six games, two against the Cardinals, will reveal if Gambino and his squad can get back to what has carried the program the last few years. 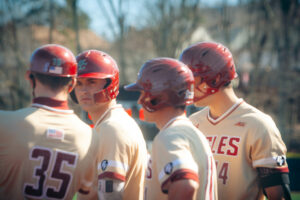