Home » Frei to Transfer to Virginia for Final Year of Eligibility 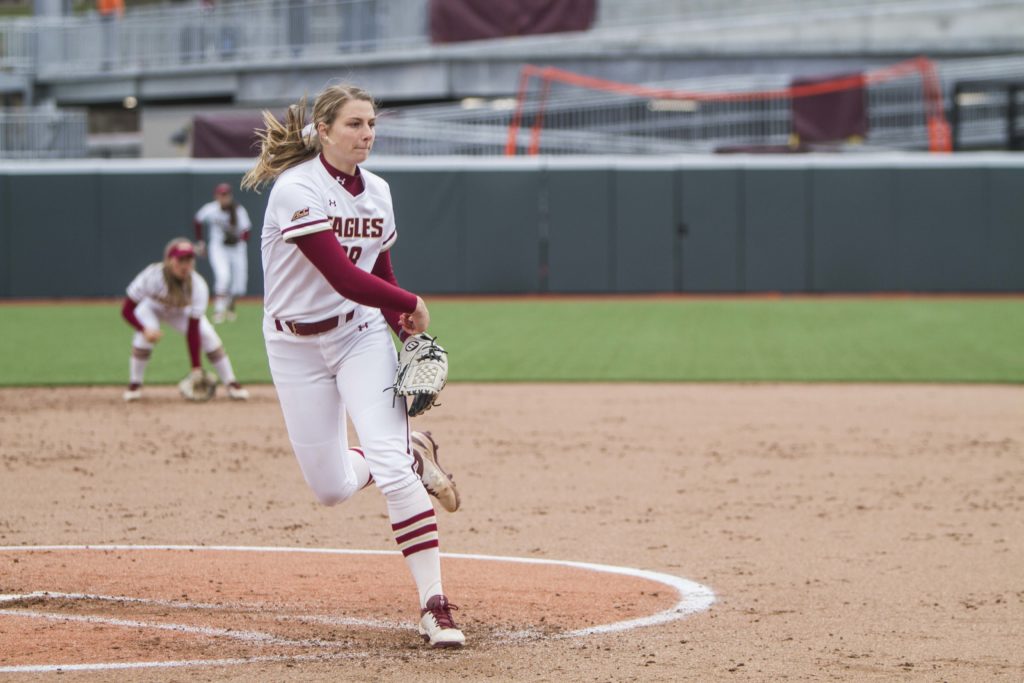 Frei to Transfer to Virginia for Final Year of Eligibility

A little bit less than a month after losing Jessica Dreswick—one of the best pitchers in Boston College softball history—Jordan Chimento, Annie Murphy, and Chloe Sharabba to graduation, the Eagles took another punch to the gut. On Monday afternoon, Dreswick’s partner-in-crime, Allyson Frei, announced that she will transfer to Virginia for her final year of eligibility.

Frei, who redshirted her junior year after suffering a season-ending injury before the start of the 2017 campaign, also graduated in May, meaning that she’ll be playing the last leg of her collegiate career as a graduate student. Her tested ACC pedigree will come in handy in Charlottesville, Va.

“We are really excited to add Ally to our roster,” head coach Joanna Hardin told VirginiaSports.com. “She comes from a quality program and will provide us with maturity and experience in the circle. Ally is bright, driven, and a great student. Across the board, she is a great fit for UVA and will help us make strides toward building the program.”

The moment Frei arrives on campus, she will be the Cavaliers’ most accomplished pitcher. In 2018, UVA—a team that only won three conference games all year and ranked dead last in the ACC—finished the season with the worst pitching staff in the league, and it wasn’t even close. Throughout the year, the Cavaliers leaned on three starting pitchers, all of whom were juniors: Lacy Smith, Erika Osherow, and Tabby Dabney. None of them logged an ERA below 5.13, and together they posted a combined 11-40 record. Collectively, UVA ended the season with a putrid 6.55 earned run average—3.04 points higher than the second-lowest mark in the conference. To make matters worse, the Cavaliers recorded the second-fewest strikeouts, the most runs allowed, and the highest batting average against in the ACC.

Coming off the best season of her career, Frei is bound to point UVA in the right direction. Even though the Brancheville, N.J. native ended 2018 with a sub-.500 record—the first in her four years at BC—her numbers spoke volumes about just how good the redshirt junior was in the circle. Although initially hampered by a lack of run support, Frei teamed up with Dreswick to form the fifth-best pitching staff in the conference. She recorded nine complete games—four of which were shutouts—141 strikeouts, and, most importantly, a career-best 2.53 ERA. At times, she was simply unbeatable, as showcased by her April 13 performance against No. 13 Florida State. Frei pitched seven shutout innings, sitting down eight batters along the way, securing BC’s first victory over the Seminoles since 2008.

There’s no question Frei will go down in program history. Career-wise, she clocks in at fourth in wins (46) and strikeouts (548), third in batting average against (.229) and starts (80), and sixth in ERA (2.71). As soon as the right-hander set foot on the Heights, she made an impact, both on and off the field.

A four-time All-NJAC selection and 2013 New Jersey Gatorade Player of the Year award winner, Frei turned in a freshman season for the ages. She won nine of her first 11 decisions, logging seven complete games in the process. By the end of the year, Frei had tallied 19 wins—the most in Eagles single-season history—leading the team in ERA and the ACC in strikeouts. From then on, it was quite apparent that Frei was a force to be reckoned with in the circle.

Even when she was sidelined by injury, she was a difference maker. One of the most charitable athletes at BC, Frei, along with five other student-athletes, was honored as part of the athletic department’s Top-Six for Service at the annual Golden Eagle Awards this past May. The year before, she won the ceremony’s Rising Leader Award.

If Frei is to turn UVA around—a program that hasn’t totaled more than 22 victories in a single season since 2012—she’ll have to be make a transition comparable to the one when she joined the college ranks four years ago. Accomplishing that feat would bolster her legacy as one of the better ACC pitchers to take the circle this decade.