Home » Amid Bruising Matchup, No. 7 Cardinals Deal BC First Loss of Season 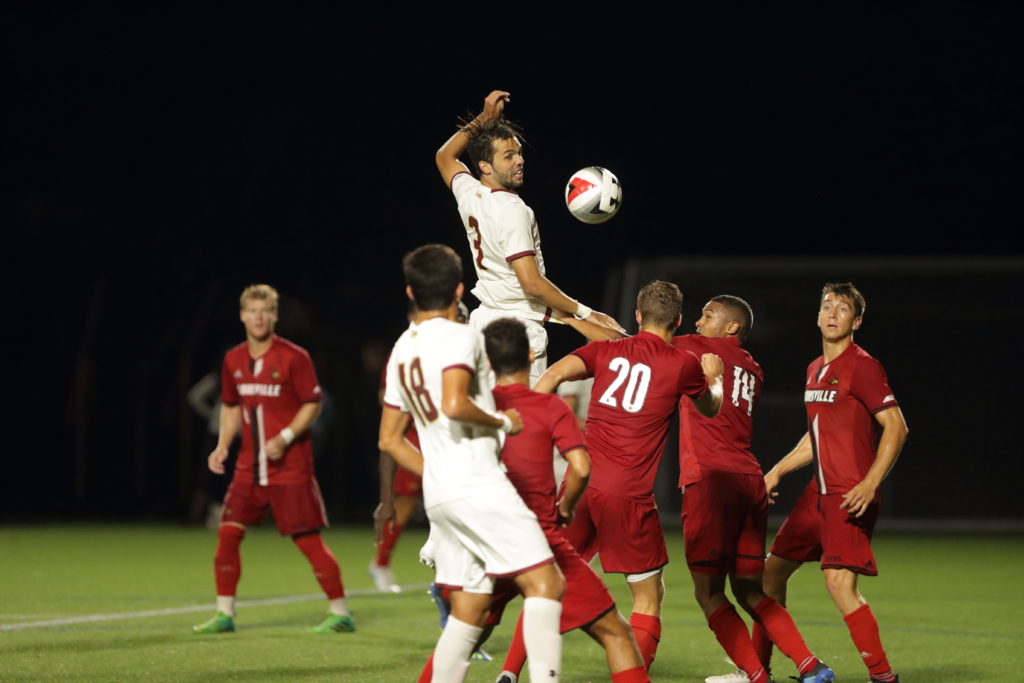 Amid Bruising Matchup, No. 7 Cardinals Deal BC First Loss of Season

In a match of absolute war ball, Boston College men’s soccer sought to claim a second conference victory over heavily touted Louisville. Coming into the game, head coach Ed Kelly knew that his team’s playing style clashed with that of the Cardinals. The longtime coach expected a battle, and that’s what he got.

Both sides witnessed players sprawling out on the field in desperate attempts to block soaring shots with their bodies or to take out the ball from underneath their opponent. Ultimately, though, it was Louisville that prevailed, scoring the game-winning goal in the 80th minute off a costly BC turnover. The 1-0 decision marks the Eagles’ (2-1-3, 1-1 Atlantic Coast) first loss of the season—a defeat meddled with physicality and missed chances.

One such moment perfectly summed up the pace of the match, when, at the 19th-minute mark, No. 7 Louisville (4-1, 2-0) junior Lamine Conte received a yellow card for taking out one of BC’s own. The midfielder had been taking falls—none of which resulted in the stoppage of play—throughout the night and thus was blatantly furious at the call. Emotions continually rose as Eagles star senior forward Simon Enstrom was dragged down in yet another fiery play. This was then followed by senior defender Abe Bibas being pulled by his jersey as the ball sailed his way.

Bibas, with blood coursing through his veins and frustration and concentration apparent on his face due to the dirty play-style of the opposing Louisville player, was not willing to let a shot on goal pass him by. With all his might, Bibas attempted a frantic, wild shot that had him suspended in mid-air with his leg making a strong connection with the ball. The shot was too high but Eagle fans in the crowd could hear a premature “da-da-da da-da-da” of a SportsCenter Top Ten highlight play.

BC’s closest shot at a first-half lead was a near perfect attempt on goal. During a penalty kick, midfielder Kristofer Konradsson’s shot nearly hit the hands of  Jake Gelnovatch. Had the ball hit the Louisville goalkeeper’s hands, the goal would have surely counted, but instead it missed by the hair of an inch and clanged against the inside of the cross bar.

The first and only goal of the game came in the final 10 minutes of regulation. Cardinals forward Tate Schmitt sent a perfect pass under the stretching foot of a BC defensive back. The ball had a rippling bounce as it found the foot of his Louisville teammate, Cherif Dieye. Obliterating the ball, the midfielder rocketed a bullet into the back of BC’s net. Kelly found it hard to muster the words that would convey what happened.

“We made a stupid mistake and they were able to capitalize,” he said.

With the score at 1-0, Enstrom had a wide-open shot the very next play, but the equalizer proved to just be a tad wide. One last-ditch attempt by BC occurred in the final stages of the match when the senior playmaker tracked a ball down on the run, leading a pack of Eagles into Louisville’s half as the Cardinals retreated back toward their own cage. Gelnovatch had two fantastic saves in a row to stunt the high hopes of a rapidly deteriorating BC team. With both sides visibly tired and annoyed, a scuffle broke out at midfield. As the clock came to a stop, so did the Eagles’ undefeated season.

A scary moment was shared by players and fans alike when BC midfielder Joe Kellett had the ball swept from underneath him by Geoffrey Dee. The Louisville midfielder kicked up Kellett’s shin guard and easily could have broken his ankle. While Dee only received a yellow, Kelly was fuming and began to lose his patience with the questionable call.

Both coaching staffs were incredibly vocal during this game and constantly attempted to keep their teams in the right mindset. Kelly was shouting to consistently tighten up the midfield. Freshman Tyshawn Rose answered his call, utilizing premier dominance over fundamentals, all while disrupting the Cardinals’ attack. Just like Kelly, Louisville’s coaching staff was incredibly fired up and, at times, seemed louder than the home crowd.

While the Cardinals had the stronger offensive presence, BC had some incredible shots on goal. Louisville proved to be the luckier of the two. In another barnburner filled with frustration and argumentative play, BC came out with—not a win, or even a draw this time—but its first definitive loss of the season against its first ranked ACC opponent of the year.