Home » Own Goal Costs Cavaliers in Draw With BC 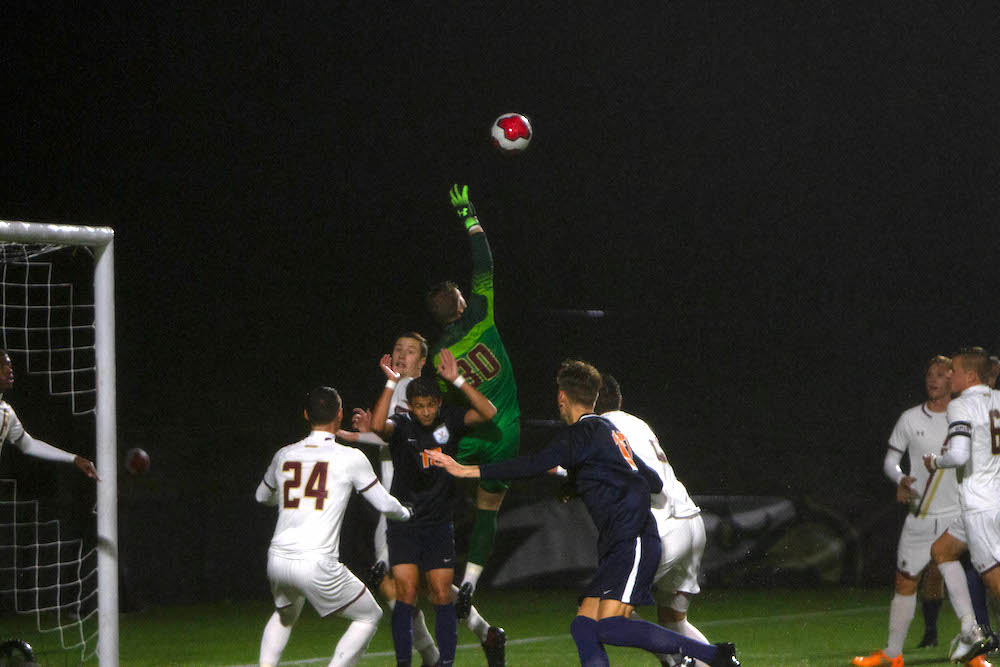 Own Goal Costs Cavaliers in Draw With BC

Entering the final third of Friday night’s game with Boston College men’s soccer, No. 1 Virginia was comfortably in the driver’s seat. The Cavaliers held a slim 1-0 lead, but they had controlled the pace of play for pretty much the entire game and were outshooting their hosts by double digits.

Then, it all came crashing down in the 64th minute. BC’s Kristofer Konradsson sent a long through ball that teammate Mike Suski caught up to and put a low cross into the box. While there wasn’t an Eagle there to tuck it home, UVA’s Andreas Ueland was. Ueland accidentally touched the ball into his own net on a rainy, sloppy night and that proved to be all BC needed to escape with a 1-1 draw against the top-ranked team in the country.

The Cavaliers (10-0-1, 4-0-1 Atlantic Coast) came into the game having not allowed a goal in their last six games, a run dating back to a meeting with Duke on Sept. 13. That stifling defense was on display against BC (7-2-3, 1-2-2), as the Eagles struggled mightily to generate any chances or possess the ball much. But, on a night where BC goaltender Christian Garner was up to par, UVA’s defense did itself in and dropped its first two points of the season.

Garner racked up nine saves in an impressive performance, holding the Cavaliers and their prolific offense in check. It was a career-best save total for the sophomore, who has started each of the last six games and has yet to take a loss, posting an impressive 3-0-3 record. He was called upon for six saves in the first half alone, then BC’s defense settled in and bent but didn’t break throughout the final 60-plus minutes.

UVA’s lone goal came out of the break, when the Cavaliers strung together an array of passes to set up a Spencer Patton goal in the 56th minute. Joe Bell started the sequence, playing the ball into the middle of the box to Daryl Dike, who was able to split the duo of David Longo and Joe Kellett with a touch. The ball landed perfectly for Dike to peel off and let Patton rifle a low, hard shot into the bottom right corner past Garner.

After that goal, it seemed like the Cavaliers were well poised for a win. Goaltender Colin Shutler had yet to be tested and Virginia had created countless chances, so it’d make sense if Patton’s goal proved to be something to build on. But then, Ueland accidentally tucked it past an unexpecting Shutler, and it was a brand new game. Ueland, a freshman from Norway, sunk to the ground and buried his head in his hands before vacantly staring off into the distance.

Almost a full half later—46 minutes to be exact—the Eagles were celebrating a draw while UVA walked off dejectedly. The visitors had outshot BC, 21-3, placed 10 shots on net to the Eagles’ zero, and had taken 14 of the game’s 15 corners. By all statistical measures except the scoreboard, Virginia should’ve won by two or three goals. Instead, a resilient BC side led by a group of defenders that played all 110 minutes—Longo, Kellett, Victor Souza, and Tyshawn Rose—was able to do something that no other team had managed to yet: take points from the Cavaliers.