The Black Keys, Modest Mouse Still Got It at TD Garden Show

In the depths of TD Garden, where the event photographers and stagehands roam free, there were pictures of two unassuming men taped on the walls on Friday night. Next to them were signs that said something along the lines of, “These men do not need passes to be backstage. Don’t stop them,” according to Steven Everett, President and Editor-in-Chief of The Heights, concert photographer for the night, and MCAS ’20.

The two figures in the pictures were, of course, Dan Auerbach and Patrick Carney, the duo that composes The Black Keys. It’s entirely possible that TD Garden posts those signs for every artist that stops in the Boston venue, and in some cases even probable—had you asked me what Smashing Pumpkins members currently look like before their show at TD Garden last summer, I would have been forced to guess based on what they looked like on the cover of their 2001 (Rotten Apples) Greatest Hits album. But for Auerbach and Carney, it was absolutely necessary. The two emerged from the caverns of TD Garden to the cheers of thousands wearing collared shirts and jeans. The simple look was aptly reflective of the no-frills rock songs that would be played during the set.

Prior to launching into “I Got Mine,” a garage rock track from Attack & Release (2008), Auerbach offered a meek, “Good evening” to the crowd. It was a humble entrance for a man who basked in the spotlight on an arena stage while performing some of the best guitar solos of modern times. From the raucous shouts of Auerbach’s Gretsch G6138 Bo Diddley, an electric box guitar, during “10 A.M. Automatic” to his mid-song guitar swap in pitch-blackness during “Little Black Submarines,” Auerbach commanded the stage by virtue of his incredible skill—rather than fighting with the flashing lights and gigantic electric chair behind him for the audience’s eyes.

During the performance, the duo recounted all of its hits, including “Little Black Submarines,” the indisputable high of the show. The song is, in some ways, the band’s “Stairway to Heaven” or “Bohemian Rhapsody.” The cathartic tempo switch and esoteric lyrics endow it with a magnetic, mystical quality. Put simply, it’s a song that beckons to be played in stadiums. And like “Howlin’ For You” or “Lonely Boy,” the song was given the stadium treatment: Dramatic lighting followed the sound of the guitar and drums through the arena as it emanated from the stacked amps.

A couple of times throughout the night Auerbach told the arena, “Let’s keep it moving right along.” While it was Auerbach that said it, it was Carney that did it. The drummer, whose kit was positioned at the front of stage right, moved the arena from the down-tempo “Everlasting Light” into the clamor of “Howlin’ For You” without pause. Carney pummeled the kit during the show’s rowdy midsection, a part Auerbach introduced by inviting the crowd to “take [it] back down to the basement”—an allusion to the Akron, Ohio, basement from which the band originated. Starting with “10 A.M. Automatic” and screeching toward “Your Touch,” “Strange Times,” “Tighten Up,” and ending on “Thickfreakness,” Carney finished out the section with a firecracker hi-hat smashing outro.

Aside from playing tracks from the band’s earliest and most prominent albums, The Black Keys played various tracks from their 2019 album “Let’s Rock.” The crowd kindly welcomed “Eagle Birds,” the second song of the set, by singing along to the quippy chorus. During the encore—which consisted of “Lo/Hi” and “Go,” two singles from “Let’s Rock,” and “She’s Long Gone,” a Brothers (2010) track—fans cheered and danced along to the performances. For The Black Keys, which released their first album in 2002, it was the ultimate still-got-it finish.

Modest Mouse, one of two openers for The Black Keys, also proved it still has it at TD Garden. The band, which formed in 1992, opened with “Tiny Cities Made of Ashes,” a 2000 track that seethed through the room with harsh distortion and heavy synths. Eccentric frontman Isaac Brock rambled on about a bet he made with himself before removing the lilac raincoat he wore for the first song and launching into “Bury Me With It,” a track from the band’s cult classic fourth album. Tracks from Good News for People Who Love Bad News (2004)—including “Bukowski,” “This Devil’s Workday,” and “Float On”—were cheered on by the adoring crowd, which graciously indulged Brock’s sometimes impossible-to-decipher vocals during lesser-known tracks like “Doin’ the Cockroach” and “A Different City.”

Jessy Wilson was the first opener to perform at TD Garden. The black female musician brought the night into the new era of rock music with tracks from her debut album Phase, which was produced by Carney, whom she called her “good friend.”

The powerful statement received cheers from the audience, as did Wilson, thanks to her incendiary stage presence and the slick polish of “Clap Your Hands” and “cool one.” A newcomer on the rock scene, Wilson and her set were a promising, albeit fleeting glimpse at the future of the genre. 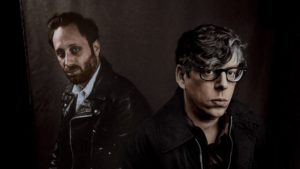