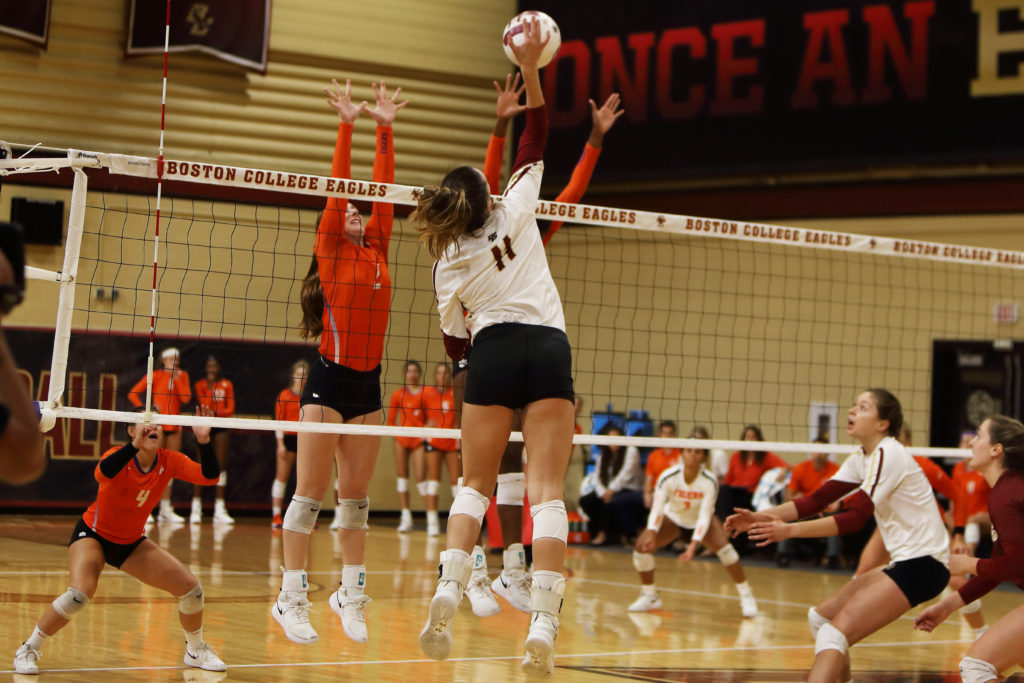 In its first ACC match of the year, Boston College volleyball sought to kick off the conference slate with a win over an equally impressive Clemson team. The Eagles claimed the first frame after right side hitter Cat Balido set the ball in the direction of the actual setter, Jane DeJarld. The junior was ready—she immediately shot it right back to Balido, who—with lofty grace—elevated, determined to make connection with the perfectly timed ball. The clap of the the right side hitter’s hand on the ball was heard throughout Power Gym as the ball took a clear cut path down the line and gifted the Eagles a 25-17 first-set win—just the start of their blowout ACC opener victory.

“In practice, we work at playing 6-on-6 and work on being tired in big-game situations,” Balido said when discussing her impressive chemistry and play with DeJarld. “Our highly competitive practice allows us to have the right mindset for moments like that.”

Scoreboard aside, the Tigers (9-5, 0-1 Atlantic Coast) were unwilling to go down without a fight. In fact, Clemson jumped out to a strong lead early in the second set. BC (11-2, 1-0) was plagued by inconsistent serves, but as resilient as the Eagles have been this fall, they were just waiting for everything to click back in place.

It all began with Balido spiking the ball into the hands of Clemson blockers. Trailing, 11-7, BC then attempted a block of its own and the ball came down hard off the Tigers’ wood. The next play would result in yet another Eagles block by none other than Balido and outside hitter McKenna Goss. The junior right side hitter would then have a spike that went right down the middle, cutting BC’s deficit to two. The real lead would be recovered when, after a seemingly endless to-and-fro that included everything from near-floor hits to net saves, the ball finally found its way in front of a sleeping Clemson defender. Ultimately, the rally set the stage for the Eagles’ second-set win.

Going into the third set, BC was determined to keep the ball rolling and put the Tigers to bed early. Libero Makenzie Morrison led the soaring Eagles crew as well as a rowdy home crowd with a series of saves that were sent from her arms left and right. The entire crowd was on their feet oohing and ahhing at the junior’s play-making ability.

Feeding off the energy, freshman Jewel Strawberry was ready to take over the game. With the Eagles up, 14-11, the outside hitter sent a huge block straight back at the faces of the opposing Clemson defense. The next play saw Strawberry yet again assert her dominance with a crushing spike. Now leading by five, Strawberry sent back one more devastating hit that set the tempo for the rest of the Eagles’ crushing shutout.

The Eagles looked super prepared to face ACC talent after their 10-2 start to the season. A combination of experienced veterans as well as heavy-hitting freshmen provides a bright outlook for the team as it heads into its following match against Georgia Tech. All season, BC has exceeded expectations—every week, the questions remains: How long can the Eagles keep it up?

“It’s just about being resilient,” head coach Jason Kennedy said. “We know we have weapons from the service line. We just have to stay with it. We can’t give up or give in on a set. We got one server to the line and rattled off nine or 10 in a row, and were right back in it. Resilience is key at this point.”