Home » Ramirez: Are Concerts Good for Your Health? 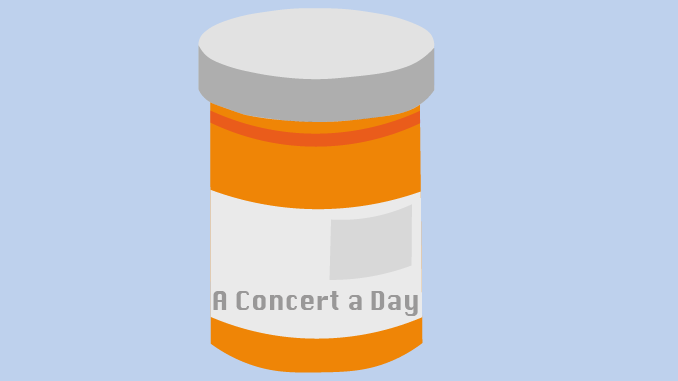 Ramirez: Are Concerts Good for Your Health?

I recently received a text from my mom saying that she read an article on Facebook detailing a study that allegedly found a link between frequently attending concerts and longer life expectancy. Naturally, I took her newfound wisdom with a grain of salt—Facebook isn’t known for its authenticity, and my mother isn’t known for her internet sensibility.

After a brief Google search, however, I discovered this time she may have found a reliable source. Variety published the findings of a study commissioned by popular British music venue The O2 that does in fact find a link between live music and longevity—a music venue finding that going to more concerts increases life expectancy is completely unbiased and clearly ethically sound. Going to a concert every two weeks allegedly has the potential to add nine years to a person’s lifespan—at the rate I’ve been going lately, I’m going to live forever.

Considering the fact that I choose to spend countless unpaid hours writing about music for The Heights, Inc., I trust that experiencing live music frequently can increase a person’s happiness and overall emotional well-being. For the moment, we’ll ignore the fact that The O2 seems to have failed to control for the implication that people who can afford to attend concerts every two weeks probably have a higher disposable income and therefore more access to goods that have a direct impact on longevity (you know, like overpriced avocados from Whole Foods and leather interior Honda Civics—the height of luxury).

Assuming this study finds a real relationship between concert attendance and life-expectancy, my next question (other than have you ever breathed the sativa-saturated air of a The 1975 concert) is does the level of enjoyment at the concert have any bearing on the effect? And are concerts actually good for my health, or am I being duped by an evil corporate figurehead once again?

As the selfless investigative journalist that I am, I will attempt to extract an answer to these pressing questions by analyzing various concert experiences I’ve had recently. Seriously Kaylie, people are dying.

FIDLAR’s show at Paradise Rock Club last week was one of the better concerts I’ve been to in the past year, the perfect combination of musical seriousness and flippant indulgence. Watching frontman Zac Carper and his band of mischievous surf rockers flood the room with anthemic lyrics about drinking cheap beer and getting high was enough to inspire me to extend my night once returning back to the safe suburbs of Chestnut Hill. Seeking any way to ride the high, I found myself rushing to off-campus parties where I could partake in some of the many illicit activities the band sung about hours earlier—while my asthmatic lungs fought off a cold in a cloud of cigarette smoke I took at least two days off my life.

I waited at least five years to see Arctic Monkeys perform, missing my opportunity when they toured AM during the height of my unironic record collecting days (which are arguably not over). Somehow, I tricked a press person into thinking my opinion was important enough to warrant a press pass to their show at TD Garden this past summer. Finally getting to see Alex Turner and company perform “505” and “Knee Socks,” the soundtracks to my teenage years, was the basic equivalent to the catharsis that is turning in an assignment on Canvas five minutes before it is due: It was just in time and I felt as though I had repaid a debt to my earlier self. But in that same vein it felt like a lot of the Canvas assignments I turn in five minutes before they’re due: half-assed.

Turner paraded around the stage in such routine fashion that I felt like Arctic Monkeys had left all of their unruly charm back in 2013 with the last of their raw riffs. Leaving TD Garden slightly underwhelmed, I made the same decision I made in FIDLAR’s case: I immediately traversed to Foster, this time searching for an excitement I felt like I had missed out on. Maybe I just make bad decisions.

I nearly contracted pneumonia from the day three downpour during Boston Calling in May and somehow stayed sick all summer after a week in Tennessee for Bonnaroo the previous summer. These, of course, are external factors that have no relation to my productivity or resultant decision making, but are considerations nonetheless.

Are concerts actually good for my health? Based on my observations, probably not. Maybe I am an outlier, or maybe this study is totally bogus. As a measly junior business analytics co-concentrator, who am I to say? I might die young, but at least I will die having been blessed by Bob Dylan and sanctified by St. Vincent.