A dim, hazy stage, and blue and violet overhanging lights set the scene as an impatient crowd stood waiting at Paradise Rock Club on Saturday evening. The audience, ranging from middle-aged rock fans to leather-clad teenagers, waited for the British rock band to take the stage for its sold-out show.

At 8 p.m., the two incredibly talented opening acts arrived. The first, Spirit Animal, set the tone for the evening with its buzzing guitar and vigorous frontman, delivering clever, insightful lyrics and a fun, pop-rock feel. The second act, White Reaper, had a more modern alternative vibe, with heavy electric guitars and some futuristic keyboard stylings accented by the singer’s high-pitched voice.

Finally, at 9:30, The Struts’ charismatic lead singer Luke Spiller ran on stage and immediately transported the audience to another era with his dramatic golden-tastled outfit, dark makeup, and a wildness in his eye that kept the audience hooked. His voice can easily be compared to Freddie Mercury, and his dance moves to Mick Jagger. Opening with their explosive new single, “Primadonna Like Me,” The Struts came onstage. Spiller screamed the opening line, “Don’t you know who I think I am!?,” and the band kicked into gear.

The band snapped into its new single “Body Talks,” as Elliott and Slack took the lead, leaning into some extended solos. The feel-good anthems from the band’s debut album, Everybody Wants, such as the upbeat “The Ol’ Switcheroo,” and the energetic “Kiss This” and “Put Your Money on Me,” were all big, bold numbers, perfect for raucous dancing, which Spiller strongly encouraged. With a new album to be released soon, several unreleased tracks were featured, and the difference in The Struts’ two albums was immediately palpable. In contrast to the power anthems of their 2016 album, several of their newer songs seemed to lean on a more laid-back rhythm, with more bluesy ballads, such as the unreleased “Fire” and “People,” but with the same captivating intensity as some of their most popular songs, such as “Could Have Been Me.”

One of the highlights of the night was Spiller’s complete captivation of the crowd. He had a host of tricks up his sleeve, from initiating a call-and-response to pulling an enthusiastic 15-year-old girl onstage to help him sing and dance to “Dancing in the Dark.” This continued throughout the show—the entire audience was completely in the moment. The only time that phones came out was to wave them as lighters during “Mary Go Round,” a slower ballad, which had been highly requested on The Struts’ social media. Every concert-goer seemed totally in the moment, enjoying the freedom of rock ’n’ roll.

The boisterous band ended the night on a truly sentimental note, dedicating its final song, the uplifting “Could Have Been Me,” to its U.S. fans, to whom The Struts owe their rise to fame, after not getting much attention in their native United Kingdom. The breakdown of the anthem was sung by the audience, who knew every word.

With their incredible energy, stylish retro outfits, and amazing musical stylings, The Struts came with the mission to “make rock ’n’ roll fun again,” and throughout the night, they truly accomplished that mission. 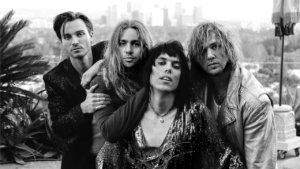