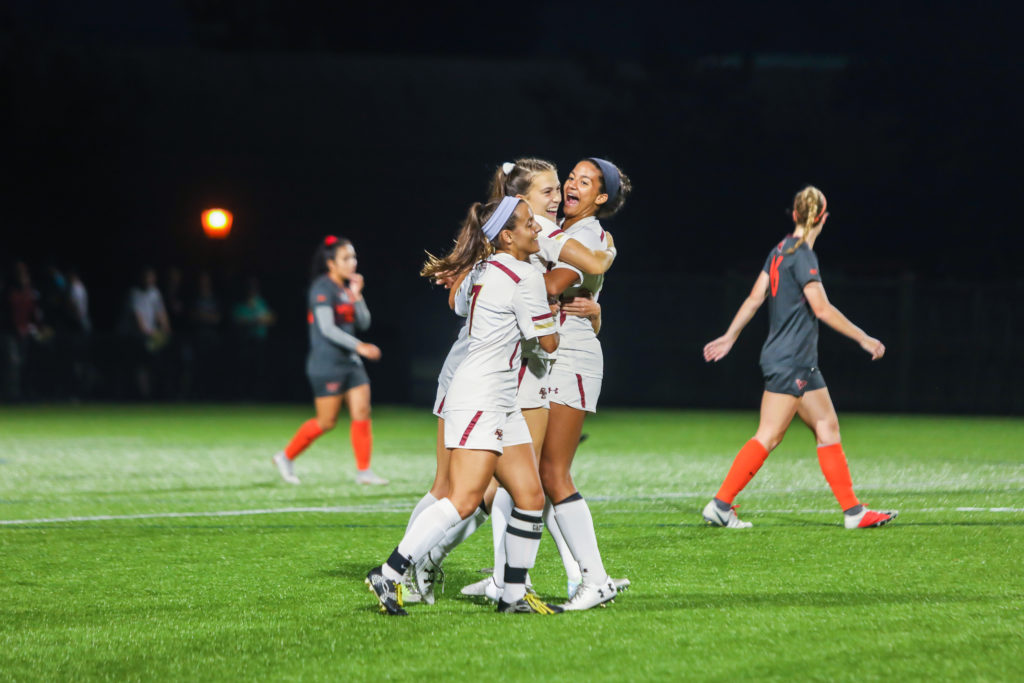 Despite recording an assist to set up the game-winning goal against Clemson on Sunday afternoon, Boston College women’s soccer midfielder Sam Coffey didn’t feel good about her performance. So, upon a return home to the friendly confines of Newton Campus—where the Eagles boasted a spotless 8-0 record—Coffey wanted to play better against another conference foe in Virginia Tech.

Three goals, a round of applause from head coach Alison Foley when she was substituted off in the 80th minute, and several hugs from her teammates later, Coffey was celebrating a convincing 3-0 win over the Hokies (7-3-3, 3-2 Atlantic Coast), one that vaulted her into third in the country in points and lifted No. 11 BC (12-1, 4-1) into sole possession of second place in the conference.

I think when you’re playing it’s kind of easy to focus on stats and points,” a beaming Coffey told ESPN broadcasters afterward, “But I just really went into this game wanting to be better than I was against Clemson on Sunday. I think the rest just followed once I set my mind to just being better.”

Eagles goalkeeper Alexis Bryant was called upon for just one save the entire night as BC rolled to the shutout win. Dominating play for stretches at a time, Foley’s team forced the Hokies offsides twice and was never really threatened in its defensive third. After uncharacteristically allowing four goals the prior three games—it’d allowed just four total in the previous nine—the Eagles were stifling.

On the other side, Coffey took advantage, netting the hat-trick on shots entirely from beyond the 18-yard box. It was a fitting night for the sophomore to score three goals as VTech keeper Mandy McGlynn, the reigning ACC Defensive Player of the Week, was Coffey’s teammate this offseason in the U.S. National Developmental Program. It was an even more impressive performance considering the overall caliber of play she was up against, as the Hokies had posted shutouts in five of their last six games.

Coffey scored her first goal in the 11th minute after Jillian Jennings fed her a through ball. With two VTech defenders flanking her, she loaded up and took a hard left-footed shot that caught McGlynn off guard—the star goaltender dove to her left but couldn’t turn it away.

It took 24 minutes for her to score the brace—this time in a typical Coffey manner—off a free kick from beyond the box. The sophomore usually aims for the upper corners, which seemed to be where McGlynn was thinking, but once again, she was beaten. Coffey dropped a low, dipping shot into the bottom left corner, leaving her former teammate stuck going in the wrong direction.

The hat-trick was complete after Coffey, in the second half, unleashed a technical clinic. She settled a volley to herself, beating one defender, then faked a shot with her right foot. Deftly touching it past another Hokie, she went with the left foot again, burying a shot into the bottom right corner just past McGlynn’s diving fingertips.

The performance from Foley’s side was especially strong considering it was coming off three-straight highly-contested matches. The Eagles are in the toughest part of their schedule at this point, with plenty of ranked foes—VTech was in the receiving votes section of the poll entering this game—and winning a game with ease was a refreshing look for the 11th-ranked team in the country.

Watching Coffey rattle off three goals, largely of her own accord, also revealed an important part of the BC offense. Yes, the sophomore is more than content to feed her teammates on set pieces and through balls, but she also has the ability to take over games. The mark of any team that goes deep into postseason play is a generational player who, when others struggle, can lead the way. That’s the Sam Coffey that kept up her torrid points pace while keeping the conference on notice Tuesday night in Newton.