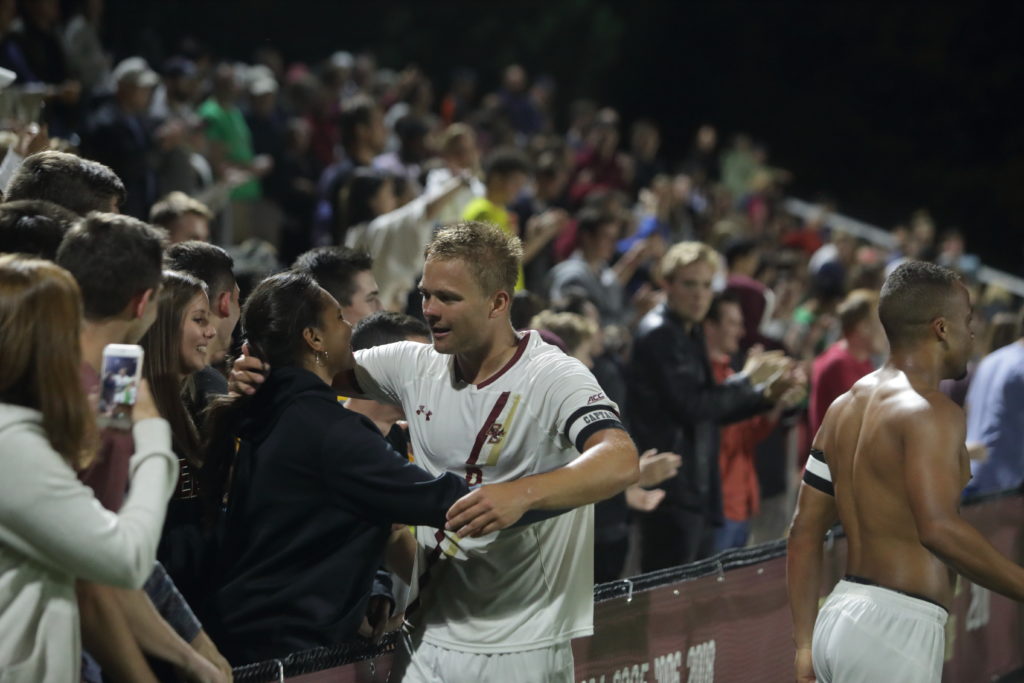 Over the course of Boston College men’s soccer’s three-game losing streak, Simon Enstrom failed to find the back of the net once. Not only that, but the senior—the program’s sixth-leading goal scorer—only recorded five shots during that span. To put that in perspective, he logged three times as many in the previous three matches.

Before Enstrom’s cold streak, the Eagles hadn’t lost a single game. It was only fitting that as soon as he returned to the scorecard, BC got its mojo back. In the 61st minute of the Eagles’ Friday night matchup against North Carolina State, the Huddinge, Sweden native flicked a Kristofer Konradsson corner kick past Wolfpack goalkeeper Leon Krapf, recording what would stand as the game-winning goal—Enstrom’s third of the year. BC was inches away from a multi-score victory, but ultimately walked away with a 1-0 win, its first over a ranked opponent this season.

Each of the teams’ previous four meetings had gone to overtime—in fact, the 2017 matchup ended in a 110-minute scoreless draw. Right from the get-go, it was clear that BC (3-3-3, 2-3 Atlantic Coast) was trying to do everything it could to ensure that an extra frame wouldn’t be necessary. Thanks to Trevor Davock, the Eagles notched the first shot on goal, and when all was said and done, BC finished the match with a 7-0 advantage in that department.

That’s not to say that No. 17 N.C. State (6-3-2, 1-3-1) was helpless. Actually, aside from Davock’s early strike, the Wolfpack controlled the narrative in the opening 15 minutes of play. Throughout the half, N.C. State possessed the ball with relative ease. Registering shots was another story. If it wasn’t for Krapf—who entered the night with the third-most shutouts in the ACC—the Wolfpack could have very well been staring at a halftime deficit.

In the 17th-minute, Tyshawn Rose intercepted a N.C. State pass near midfield and immediately dumped the ball off to Davock. The redshirt junior forward sprinted down the left side of the pitch. Once he reached the 18, he faked left, turning Wolfpack defender David Norris around in the process, and ripped a shot toward the near post. Krapf was all over it, though. The sophomore goalie—who tallied six saves on the night—dropped to his knees, caught the ball, and cradled it like a baby.

Then, with close to 11 minutes remaining in the first period, Joshua Forbes—positioned at midfield—drove a long ball to left side of the 18. Enstrom tracked the pass, elevated, and headed it behind him for his teammate, Davock. From there, the redshirt junior completed the give-and-go exchange by heading the ball right back to the Eagles’ leading scorer. Enstrom took one touch and then volleyed a knuckling shot toward the cage. Enstrom’s attempt was dipping below the crossbar, but Krapf leapt in the air and got a piece of the ball with his outstretched right hand. The highlight-reel save postponed the inevitable.

BC forced a corner kick in the 61st minute, and Konradsson promptly manned the flag. The freshman delivered a low cross toward the near post for a wide-open Enstrom, who got a piece of the ball with a running header—just enough to beat a diving Krapf for the game’s first goal. In celebration, Enstrom bolted toward the right corner of the field, faced his teammates with outspread arms, and hugged classmate Abe Bibas.

Sixteen minutes later, the Wolfpack countered with a header of its own. This time, however, the ball sailed over the crossbar. Gabriel Machado whipped a free kick into the penalty area for Christoph Schneuwly, but the senior defender put too much on the nod, perhaps wasting N.C. State’s best scoring opportunity of the night.

Soon after, Callum Johnson nearly extended the Eagles’ lead. After stealing the ball from Pepe Garcia inside N.C. State territory, the junior danced inside the 18 and dialed up a cross for a streaking Enstrom. Luckily for the Wolfpack, the pass had too much sauce on it, and Manny Perez got a foot on the ball, knocking it away from BC’s primary scoring threat.

But the one-goal cushion was all the Eagles and goalkeeper Antonio Chavez Borrelli needed. The sophomore dispelled a pair of corner kicks in the game’s final stages, the second of which he punched outside the 18 with just two minutes left in regulation.

Win or lose, the Eagles have put on a show this year. Friday night marked the sixth time this season that head coach Ed Kelly’s team has entered intermission tied, and Enstrom’s goal was BC’s fifth this fall that has been logged between the 61st and 75th minute of play. The Atlantic Division showdown was about more than just theatrics, though—the Eagles’ victory ends a one-month winless drought and propels BC into third place in the divisional standings with three weeks left in the regular season.