The neuroscience major will not be available to the Class of 2019.

The department sent out a survey in March 2017 to evaluate psychology student interest in a neuroscience major. Fifty-three percent of students said that over the course of study at BC, they either agreed or strongly agreed that their interest in a neuroscience career had increased over their time at the University. Nearly 49 percent of respondents either agreed or strongly agreed that, assuming they would still graduate on time, they would change their major to neuroscience.

“The Neuroscience degree will provide students with key skills that can lead to success in a variety of careers,” Elizabeth Kensinger, chair of the psychology department, said in an email. “The degree will deepen students’ critical thinking, scientific writing, and laboratory research skills, all while asking student to reflect deeply on the neurobiological principles that give rise to the human experience.”

Students who graduate with a neuroscience degree will be able to synthesize research from multiple fields, including psychology, biology, and chemistry, which aligns with BC’s emphasis on helping students connect different disciplines in their studies.

“A neuroscience major was never offered at BC, which most likely deterred many prospective students from considering going to school here,” said John P. Christianson, a psychology professor. “So, a couple of years ago, the department agreed to come up with a proposal for a neuroscience program which was approved in May of 2017.”

The psychology majors can still sufficiently prepare students for careers in neuroscience, but are more broad and prepare students for a different variety of careers, according to Christianson. The current majors will remain unchanged and available to students currently enrolled in them.

Christianson, Kensinger, and their team are looking to work with other departments to tailor the neuroscience major to what students want to pursue. For example, Christianson said he’d like to see computer science, physics, and chemistry courses geared specifically toward neuroscience students.

In addition, Christianson said he believes introducing the neuroscience discipline will help efforts to recruit faculty to BC.

“There was a large turnover in psychology B.A. and B.S. faculty who were interested and studying neuroscience, so our department has tried to emphasize a curriculum that includes neuroscience more prominently,” he said.

Update (10/12/18, 11:30 a.m.): A link to the survey that evaluated students’ interest in a neuroscience major was originally included in this article and has been removed. In addition, the increase in interest in neuroscience careers and the major have been updated to include survey respondents who agreed or strongly agreed that interest had increased, rather than solely including respondents who strongly agreed. 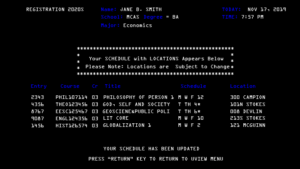