Jack Connors Jr., BC ’63, is known throughout Boston as a business leader and philanthropist dedicated to bettering the lives of the city’s residents. On Oct. 4 at the Edward M. Kennedy Institute for the United States Senate’s Annual Dinner, he received the Award for Inspired Leadership. The award is given to a figure who demonstrates Kennedy’s passion for service to both community and country, as exemplified by his career in the Senate and the mission of the institute itself.

Since 2015, the Kennedy Institute has served as a nonprofit organization dedicated to educating the public on the role of the Senate and fostering civic engagement. Interactive educational activities, exhibits, and a wide range of programs held throughout the year enable the institute to engage “students and visitors in a conversation about the essential role each person plays in our democracy and in our society,” according to a press release.

The Annual Dinner is an event that helps fund the educational programs that make the late Senator Ted Kennedy’s vision for the institute possible. Nearly 350 guests attended the dinner, including prominent figures in the philanthropic, educational, medical, and political spheres.

Along with Victoria Kennedy; Boston Mayor Marty Walsh, BC ’09; Massachusetts Governor Charlie Baker; and Paula Johnson, the president of Wellesley College, all gave remarks on the role Connors has played in shaping both the Kennedy Institute and the greater Boston community.

Connors is a founding partner of Hill, Holliday, Connors, Cosmopulos, Inc., now one of the top 20 advertising firms in the United States, but his achievements extend far beyond the corporate realm. In 2008, Kennedy sought Connors’s assistance in making the Kennedy Institute a reality. Connors spearheaded fundraising efforts for the formation of the institute, working with what Victoria Kennedy called “the precision of a military campaign.”

Besides raising $100 million to found the institute, Connors has served as an active participant and leader in all areas of Boston’s philanthropic community. According to the event program, he served as chairman of the Board of Directors of Partners HealthCare System for 16 years before becoming chairman emeritus in 2012. Connors has also been a member of the Boston College Board of Trustees for over 30 years and is a member of the Board of Dean’s Advisors for the Harvard T.H. Chan School of Public Health.

All the speakers mentioned Camp Harbor View. According to the event program, late Mayor Thomas Menino enlisted the help of Connors in devising a solution to address the rising rate of violence among teens in Boston’s underserved communities. Connors raised the money necessary to fund a summer camp on Long Island in Boston Harbor, which opened its doors in July 2007.

Walsh spoke about his experience working with Connors in an effort to address homelessness in Boston early in his administration. After only a year, the task force had worked to end chronic veteran homelessness in the city and is now working to alleviate all chronic homelessness.

“It was more than just funding with Jack,” Walsh said. “It was the experience of how to get things done. It was relationships. It was mentorships. It was trust. That’s what Jack Connors and who Jack Connors is.”

In his remarks, Baker recalled the first time he heard the name Jack Connors—40 years ago while fundraising for the Big Brother Association as a sophomore in college. He remembers struggling with his fellow members to even raise $8 but being reassured by someone at Big Brother that as soon as Connors got on the phone things would change.

“The Big Brother Association of Boston’s fundraising efforts were a bunch of young whippersnappers like me who couldn’t raise money to save their life, a few people who felt sorry for us, and Jack Connors just dialing for dollars,” Baker said.

To Baker, this first encounter with Connors is a testament to his passion for service even before he had established himself as a successful businessman.

In his acceptance speech, Connors spoke to the legacy of Kennedy, particularly his dedication to serving the people he represented and ability to come to bipartisan solutions.

“Ted Kennedy devoted his life to others, and he did it with a sense of style and a sense of humor,” Connors said.

“I don’t think he’d recognize the Senate today, a place that he so deftly used as a place from which to do good,” he said. “He worked his magic—and it was magic—with a spirit of positivity and an enthusiasm that was infectious. He worked hard to make things better for people, and he enjoyed virtually every minute of it.” 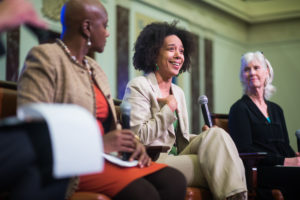 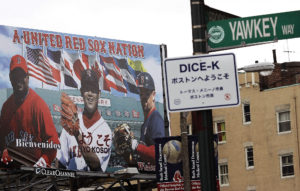