Home » Expecting the Best Gets You Success 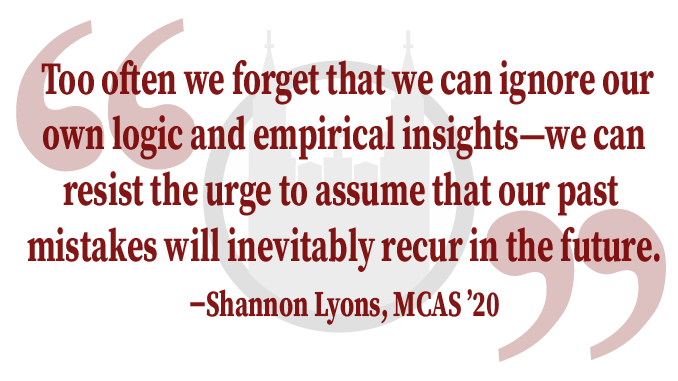 Expecting the Best Gets You Success

For a large part of my life, I clung tightly to the notion that successful people “expect the worst, and hope for the best.” Growing up, I shared in this common—albeit irrational—belief that too much optimism was blinding and that thinking too highly of the future would inevitably result in disappointment.

In retrospect, I think this attitude first developed when I began playing sports as a child: The first time that I hit a homerun in little league softball, I was completely caught off guard. I do not recall which Dad had been guilted into standing on the mound to toss painfully-slow, underhand pitches that particular day, but I remember vividly the feeling of the metal bat vibrating in my hands as the neon ball went sailing into left field. I couldn’t believe my eyes.

Relishing in my glory after the game, I tried to recall exactly what I had done prior to stepping up to the plate: What had I eaten for dinner? What color socks had I been wearing? What song had I listened to on the way to the field? Eventually, I settled on the notion that I had not done anything at all—that I had not expected anything. In fact, though I didn’t necessarily want to admit it, there was part of me anticipating a strike-out or a mere ground ball down the third-base line. And so, at the ripe age of 10, I came to the conclusion that it was best to expect the expectable and that contemplating the “worst-case scenario,” in every situation, would only soften the blow if things did go awry.

Fortunately, not all childhood beliefs remain with us forever. Over time, I came to realize that “expecting the worst” was a defense mechanism that was not protecting me at all but was in fact enhancing my own likelihood of failure and misfortune.

There is a direct correlation between the nature of our thoughts and the fabric of our individual realities. People often dismiss this notion, prematurely deeming it to be a new age clichè associated with the abstract law of attraction. There is real scientific evidence linking high success rates—in areas like academics, business, and medicine—back to positive thinking, however.

In January of 2018 a group of Stanford scientists published a study exploring why elementary-school students, who claim to enjoy math, tend to perform better in the subject than those who express an aversion to it. As they expected, the scientists found that students who approached the subject of math with a positive attitude performed significantly better than those who claimed to hate the subject. Moreover, the brain scans showed that a student who is fond of math has a far more active hippocampus than those who possess negative feelings toward the subject.

“Based on our data, the unique contribution of positive attitude to math achievement is as large as the contribution from IQ,” the study’s lead author, Lang Chen, said.

Of course, we cannot will ourselves to enjoy a subject we naturally dislike. We can, however, hold ourselves accountable for the attitude which we bring to any given subject, situation, or set of circumstances. Too often we forget that we can ignore our own logic and empirical insights—we can resist the urge to assume that our past mistakes will inevitably recur in the future. We are the artists of our own expectations—whatever we can imagine, we can anticipate. And, nine times out of 10, what we can anticipate is what we will get.