Lukas Graham’s 3 (The Purple Album) starts unexpectedly, in a way that no listener would expect. “Not A Damn Thing Changed” begins the album with passion and frustration and sets the tone of the album right away. The song hits hard, and Graham speaks of hope (more accurately a lack thereof) as he talks about his desire to see the people he loves succeed. Sentiments about depression and suicide are included as well, and the depth of this single song sets high expectations for what follows.

The hard, passionate tones of the first track disappear with “Lullaby,” a song that embodies its title. Piano is laid over the beautiful sound of strings as Graham pours his heart out. The song is clearly personal with thoughts about family and love, but it is so well-written that any music fan could appreciate it. With about a minute left, Graham’s voice echoes throughout the listener’s ears in a dizzying manner, and the song closes out perfectly.

Third up is “You’re Not the Only One,” which admittedly has a strange sound. Graham brings up the lack of “redemption songs” that are written now and seems to be pleading for one. This likely will not be anyone’s favorite song, but it is easy to listen to and the sound is almost euphoric.

Soft reverb on an electric guitar highlights the first notes of “Love Someone,” which as its title would suggest, is a love song. It was cliche, and frankly the sound of the song is wasted due to boring lyrics. While it certainly does not detract from the album as a whole, it was disappointing.

One of the better sounds in music is that of a choir, which is joined by deep piano riffs at the beginning of Graham’s fifth song. “Promise” allows Graham to use the entirety of his vocal range and it keeps a fun, upbeat mood that will please listeners. The drums are perfect, and the song is reminiscent of some of the great rockabilly singers and their ability to invoke feeling with their voices.

Graham made a mistake following “Promise.” The tempo and mood of the album become sad and quiet. He goes back to the duo of piano and choir in “Stick Around.” It should be made clear that this is an excellent song. Sadness and nostalgia are the prominent emotions, and they are palpable, but it just feels out of place. This song in particular exemplifies Graham’s ability to write great music, but his inability to organize it. 3 could be listened to on shuffle and the listener would not miss a thing.

Next is “Unhappy,” which picks up a tempo similar to “Promise,” but overall it is a weak song. More cliche lyrics and an overuse of unnecessary sounds continue to detract from the quality of Graham’s music. The chimes that creep into the background during the chorus are alright, but were unnecessary, another common theme from the album. Graham tries to do too much. With his voice and talent, he should keep things simple and focus on more important areas. The song itself is very mediocre, and does not find a true home in the album—nobody would notice if he left it off.

Sounds of children playing try to break through the soft key strokes of a piano as Graham brings up his childhood. “Everything That Isn’t Me” is the sound of an apology, and it is without a doubt the best song on this album. This song will make people reflect, think about family, and probably cry. Well-written from start to finish, this is some of Graham’s best work. In fact, this may be the only song on the album that is absolutely necessary to listen to.

Graham follows up a phenomenal performance with another strong track called “Hold My Hand.” It is rhythmically excellent, and Graham achieved exactly the sound that it appears he was looking for. He admits his sins and asks for someone to believe in him, and he managed to sing about a rather overused topic without sounding redundant.

3 concludes with “Say Yes,” a ballad about an imaginary wedding. Organs were the perfect instrument for this song, and the rest of the song is about hope for the future with the woman Graham wants to marry. There are a lot of personal sentiments that the average listener may not understand, but it also seems that they are not supposed to. It is a happy conclusion to the album, and credit must be given to Graham for a strong conclusion. 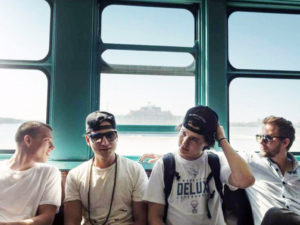