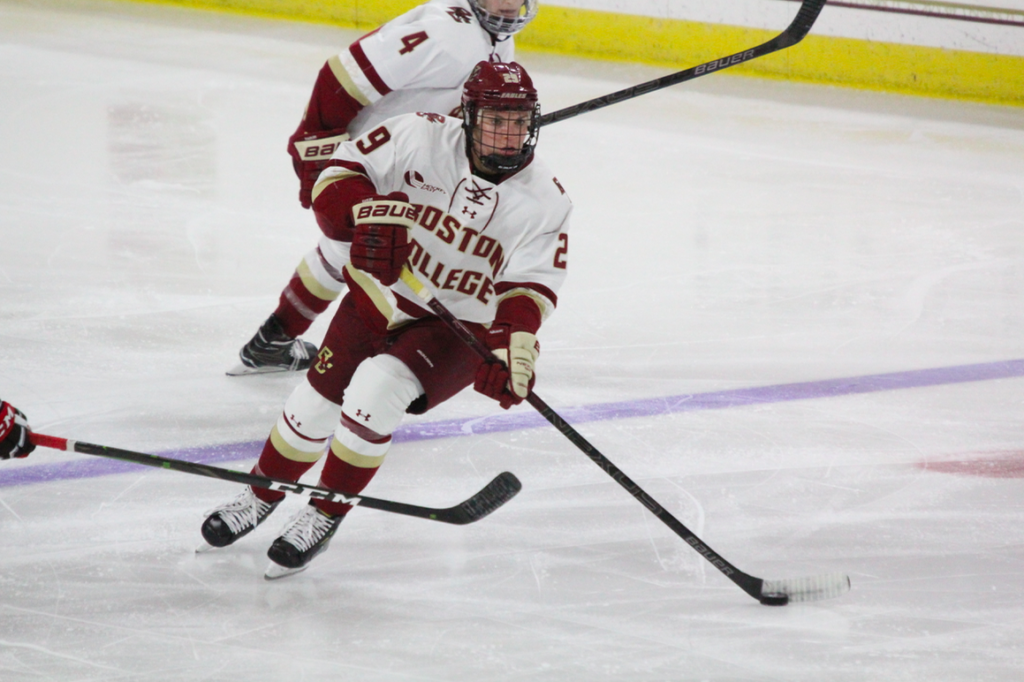 BC Remains Undefeated in Hockey East Play, Rolls Past Maine

Midway through the second period, Boston College women’s hockey was involved in an intense, scoreless battle with Hockey East foe Maine, an upstart program that received preseason first-place votes just two years removed from a 21-loss season. Neither team had created great scoring opportunities, and it appeared as if BC’s six-game win streak was in serious jeopardy on the road. The Black Bears had completely matched BC’s physicality and speed, but, as is often the case against the reigning Hockey East regular season champions, they cracked.

A long distance shot from Cayla Barnes on a power play snuck through traffic and found the back of the net. From that point on, the sixth-ranked Eagles didn’t look back, fully asserting their dominance over Maine in a decisive 4-1 victory.

The game got off to a very choppy start, as three penalties were called in the first four minutes of action, the hallmark of an intense conference matchup. In fact, seven total penalties were whistled during the duration of the opening period—giving each team plenty of time to generate scoring opportunities. Yet, neither squad capitalized on their chances, and both defenses held strong.

The rampant penalties continued in the second period, as both teams combined to spend 16 more minutes in the box. This time, though, the Eagles (7-2, 4-0 Hockey East) made the most of their opportunities with an extra skater. About halfway through the second period, Barnes fired a low shot past Black Bears goaltender Carly Jackson. Not only did this goal give the Eagles the lead, but it served as the impetus for a much stronger BC effort the rest of the contest.

While the Eagles seemed to gain energy, Maine (6-2, 2-2) headed in the opposite direction, appearing to run out of steam. Seven minutes later, after a body-checking penalty was whistled on Taylor Leech, BC’s Grace Bizal doubled her team’s lead with her second goal of the season. She followed up a dangerous effort by Kali Flanagan and stuck the rebound in the back of the net. The goal was initially disallowed for goaltender interference, yet after a quick video review, the referee confirmed the validity of Bizal’s shot.

Despite the Eagles’ terrific close to the second period, the Black Bears found their second wind and responded passionately in the third. Just moments after the opening faceoff of the period, Maine’s Vendula Pribylova was stymied on a clear chance by freshman BC netminder Maddy McArthur. Two minutes later though, McArthur was unable to keep out a close shot from Maine star Tereza Vanisova. The junior forward confidently converted from just in front of goal, after receiving a brilliant feed from Maggie Blair.

While momentum seemed to be shifting in favor of the home side, it was another penalty that undid the Black Bears. After a tripping call on Ida Press, Erin Connolly tipped home a shot from Bizal to restore the two-goal lead for the Eagles. Connolly picked up where she left off, as she was also able to find the back of the net in the last meeting between the two teams. In the closing seconds of the game, reigning Patty Kazmaier Award winner Daryl Watts tallied her fifth goal of the season with an empty netter.

For the seventh consecutive game, BC held its opponent to one goal or less. This feat is even more impressive considering that Maine had previously averaged four goals scored per contest, and that the Eagles are starting a freshman in goal. BC also demonstrated its tremendous offensive depth, as none of its three leading scorers—Watts, Caitrin Lonergan and Lindsay Agnew—scored during the competitive part of the game, but the Eagles still racked up goals.

Sunday afternoon’s contest further established BC’s position at the top of Hockey East. While Maine—a team still receiving votes in the USCHO.com top 10 poll and off to its best start in program history—appeared to be one of the Eagles’ top challengers in the conference, it is clear that BC is simply a tier above them. The Eagles have certainly found their groove since the oft mentioned season-opening sweep handed to them by Minnesota-Duluth, and there is no indication that their win streak will be stopping anytime soon.