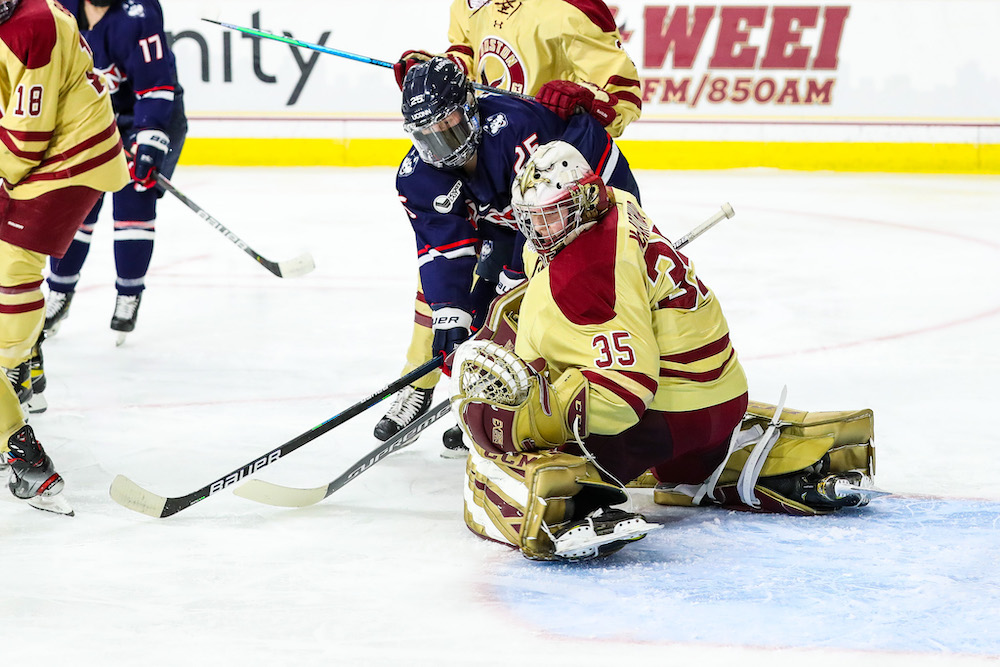 The story of Boston College women’s hockey’s season so far has been its high-scoring offensive attack. BC has scored four or more goals in three of its five contests and is second in the nation in total goals so far this year with 14.

While the Eagles’ attack, led by a goal and an assist from Kelly Browne, put up a solid performance against UConn, the defense was the star of the game and propelled BC to a 3-1 victory over the Huskies for a weekend sweep.

Eagles goalie Maddy McArthur was a wall in net, racking up 35 saves and making a number of huge stops.

“She made a couple huge saves in the first period that I think gave our players a little bit of, you know, felt like they could go play and it was okay to make a mistake here or there because Maddy was playing really well back there,” Eagles head coach Katie Crowley said in her postgame press conference.

McArthur’s save on a two-on-zero UConn break in the first period stood out even in a game full of spectaculars from McArthur. With 8:42 to play in the period, UConn forward Morgan Wabick intercepted a bad pass from the BC defense and flew down the left side of the ice with fellow forward Natalie Snodgrass skating parallel.

As McArthur moved to her right to cut off the angle on goal, Wabick slid the puck across net to Snodgrass, but McArthur lurched to her left and got a pad in front of the shot.

“Yeah It’s huge for us,” Browne said in the postgame press conference when asked about McArthur’s performance. “Brought us a ton of momentum and she made a huge save on a two-on-0 and that was huge, we needed that. She kept us in the game.”

With McArthur rock solid at the back, BC needed just a couple of goals to win, and the Eagles offense was more than capable of delivering.

After threatening for much of the opening minutes of the game, the Eagles finally got on the board with 11:17 to play in the first period. Hadley Hartmetz rocketed a one-time slap shot from the point, and Olivia Finocchiaro tipped it into the net.

The Eagles continuously threatened the net for the rest of the period, as Browne and Hannah Bilka’s speed and ability to deke off the rush proved a nightmare for the Huskies’ defense.

Despite the constant offensive pressure, it took more than 20 minutes of game time for BC to pick up its second goal.

Browne poked the puck from UConn and dished it up the ice to Savannah Norcross, who cleverly passed up a one-on-one opportunity and left the puck for Browne. The lone UConn defender stayed with the puck, leaving Norcross wide open, and Browne passed it back to her for the goal with 7:42 to play.

Browne weaved through a pair of defenders less than two minutes later to give the Eagles a 3-0 lead.

UConn got a goal back at the beginning of the third period and mounted a furious assault on net during the last couple minutes of the game but never posed a serious threat to get back into the game.

The only knock on BC’s performance was its struggle to capitalize on power plays. Finocchiaro’s goal came on a power play, but the Eagles’ passing and positioning largely looked sloppy when they had the advantage in numbers.

BC’s struggles were particularly glaring on its second power play, coming midway through the second period, as UConn had better chances on net than the Eagles during the two minutes.

“I thought for the most part we did okay, but we need to capitalize on those opportunities more and that’s something that will certainly be a focus for us moving into next weekend and we gotta make sure we clean that up a little bit,” Crowley said. 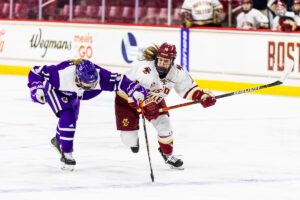 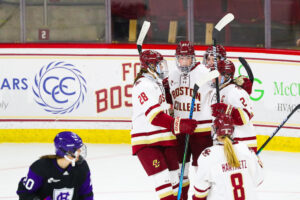 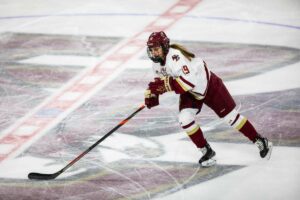