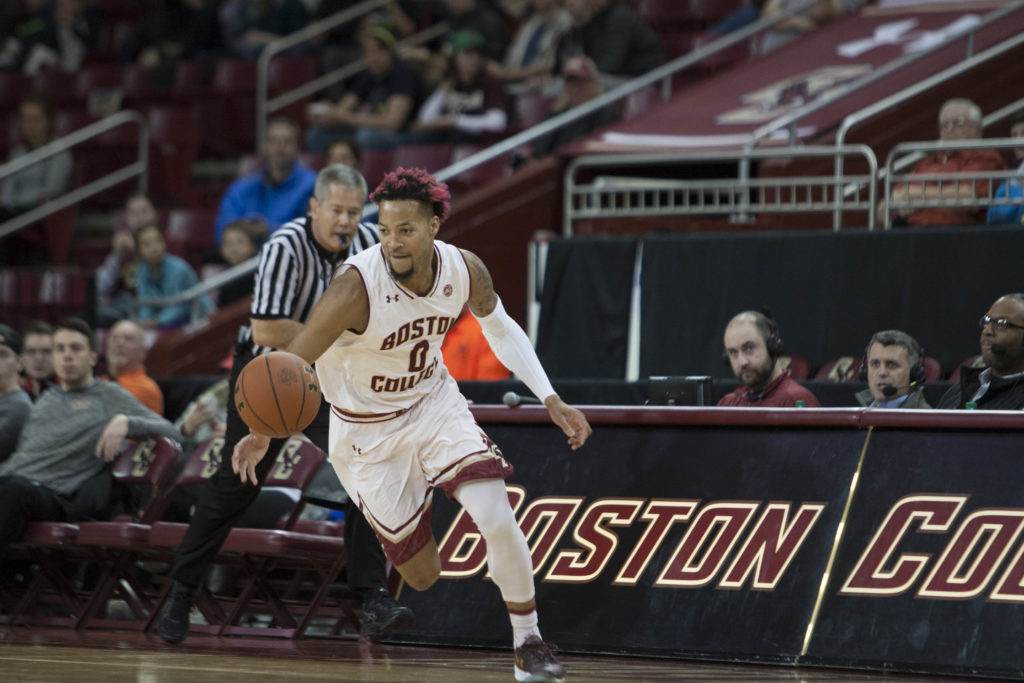 Boston College men’s basketball looks to get off to a hot start on Tuesday when it takes on Milwaukee in its 2018-19 season opener. After struggling in ACC play for the first three years of head coach Jim Christian’s tenure, things finally took a turn in the right direction for BC this past season, in large part thanks to the backcourt duo of Ky Bowman and Jerome Robinson.

With Robinson now in the NBA, Bowman is the only returning member of the duo, but not all is lost. In Tuesday’s game, BC still has Jordan Chatman, four-star recruit Jairus Hamilton, guards like Wynston Tabbs, and a handful of returning starters.

The game will be available to livestream on ACCN Extra through WatchESPN.

1) Freshman Jairus Hamilton averaged 28-13-3 throughout his high school career for the Cannon School in North Carolina. In his junior year alone he averaged 25-7-5.

2) During last season, Jordan Chatman posted a career-high 30 points at Virginia Tech. With an increased role in the Eagles’ offense this year, Chatman might be able to establish himself as the team’s second scoring option.

3) BC was ranked 12th in the ACC Preseason poll, much lower than it would have been had Jerome Robinson returned. With Robinson, the Eagles could have been a borderline top-25 team, but now the surrounding members of this BC team will have make up for his loss and earn the media’s trust.

1) Only one senior, forward Vance Johnson, is returning to the Panthers. Last season, he averaged 14.6 points per game. Milwaukee is primarily a young team looking to amass a new starting crew, since most of its top scorers have moved on from the team.

2) The Panthers added two new freshmen in guards Shae Mitchell and Jamar Madge. Mitchell looks to be a guard/forward combo with his 6-foot-7 length, but it is unlikely that either will see much playing time amid Milwaukee’s slow-developing rebuild.

3) Just two years ago, the Panthers finished at the bottom of the Horizon League with a record of 11-24 overall, which, at the time, was only slightly better than BC’s 9-23 overall mark. This past season, both teams improved—Milwaukee rounded out the 2017-18 campaign with 16 wins.

The last time both teams met was actually during the second round of the NCAA Tournament on March 19, 2005. The 12th-seeded Panthers pulled an upset win over a fourth-seeded BC team that racked up 24 regular-season victories. Milwaukee won, 83-75, to send the Eagles home from the tournament in their first-ever meeting.

Ky Bowman plays just as well, if not better, than he did last season with Robinson in the lineup. Now a junior, the guard has a chance to take over this Eagles team and the ACC by putting up monster numbers. But he shouldn’t have to do it all. Chatman could very well get hot from outside and Hamilton will have his fair share of chances to make a splash in his collegiate debut. While at BC, Christian is 3-1 in season openers. A loss to Milwaukee would certainly come as a surprise.

Both Bowman and Chatman are off their game. Look for the Panthers to stifle the ball outside the paint and limit the BC guards to taking solely long-range attempts. If the Eagles struggle early, this could be a game that would fall on the shoulders of Hamilton and top big man, Nik Popovic. The returning force in the paint needs to rebound the ball heavily, as he had done last season when he ranked 21st in the ACC in rebounding. Failure to do so would result in more shots being put up by Milwaukee and less of a chance for Hamilton to get touches on the ball or either of the star guards to break out of a cold streak.