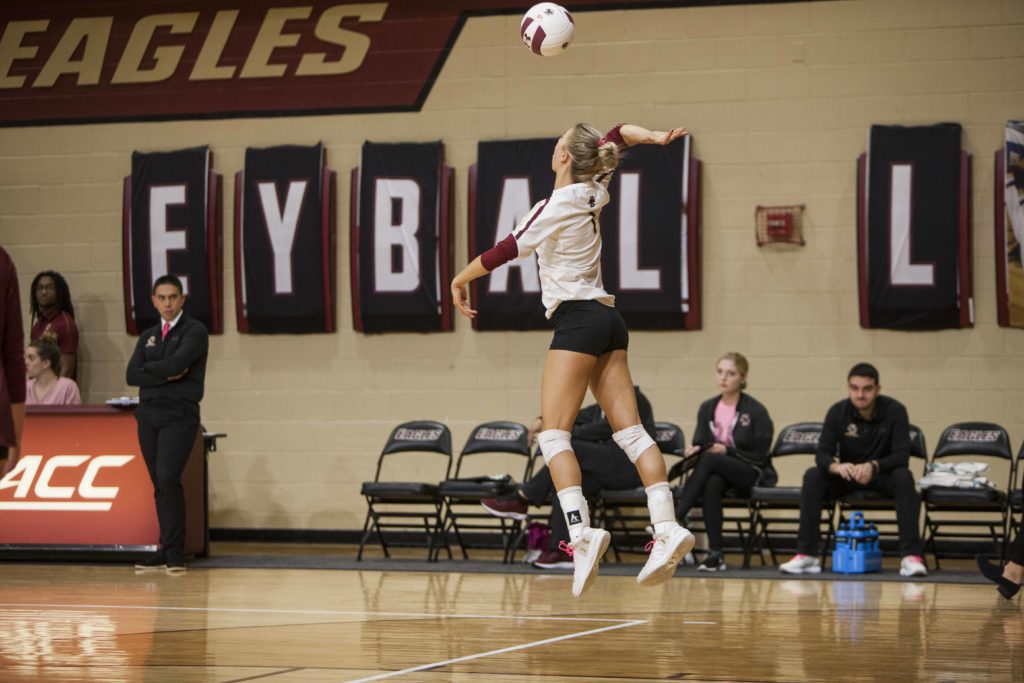 Boston College volleyball strives to snap a four-game losing streak as it welcomes Louisville to Power Gym for a Friday night contest. The Eagles have lost 11 of their past 12 games after a fantastic start to the season and have dropped to the cellar of the ACC with just four games remaining. They’ll be looking for some revenge after losing a tough four-set match against the Cardinals just two weeks ago.

Who is BC playing?
Louisville

Where is BC playing?
Power Gym at Conte Forum, Chestnut Hill, Mass.

How to Watch:
The game will be livestreamed on ACC Network Extra and live stats will be provided by Sidearm Stats.

By the Numbers:
BC:

1) BC has consistently posted good defensive numbers this season. The Eagles are allowing opponents to hit at just a .198 clip, which is good for the fourth-best mark in the ACC.

2) Cat Balido has been a steady force for BC offensively. She leads the team with 238 kills.

3) Jane DeJarld and Jill Strockis have been two of the Eagles’ best performers this year. The dynamic juniors have both recorded four double-doubles this season.

1) The Cardinals are 6-1 all-time against the Eagles.

2) Molly Sauer has been excellent defensively and offensively for Louisville. She leads the team in both digs and service aces.

3) The Cardinals are just 5-3 on the road this year, although all three losses have been to ranked opponents.

Last Meeting:
The teams last met two weeks ago at Cardinal Stadium, Louisville’s home gym. The Eagles won the first set before the Cardinals responded, taking the next three in a row to claim the match. BC was led by Balido’s 13 kills, while both Clare Naughton and Jewel Strawberry chipped in 12 apiece.

Outlook:
At this point in the season, the Eagles are simply hoping to better their ACC win total from the 2017 season. That road starts with a Louisville team that received 36 votes in the latest AVCA Coaches Poll. Despite losing to the Cardinals last time out, BC certainly proved that it could hold its own. The Eagles were just two points away from stretching the match to a fifth set and have had five full days off to prepare ahead of the match. If BC is able to serve slightly better than it did against Louisville on the road, it should have a fighting shot to get back in the win column.