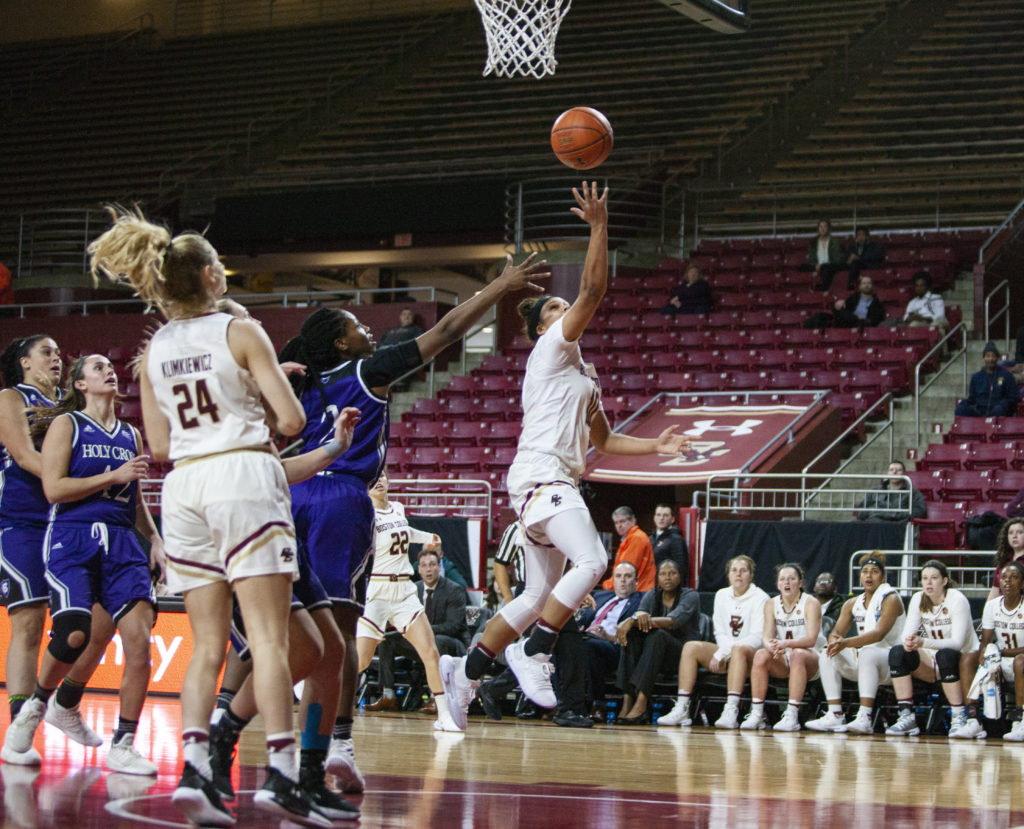 Dickens, Garraud Pace BC to Convincing Win Over Holy Cross

For the first 10 minutes of Boston College women’s basketball’s third game of the season, the Eagles were back to their usual up-tempo offense and finding plenty of scoring chances against Holy Cross, but they were struggling to contain the Crusaders on the other side. Holy Cross forward Lauren Manis, fresh off a 26-point outing against Rider, was scoring seemingly at will, piling up 14 first-quarter points and giving her team a two-point lead.

It was far from the ideal start for head coach Joanna Bernabei-McNamee’s team. So they went back to the drawing board, and the game plan that Bernabei-McNamee had in mind quickly came to fruition. Behind freshman guards Makayla Dickens and Marnelle Garraud, who both went for 19 points, the Eagles outscored their visitors by 28 points in the next three quarters, rolling to an 89-63 win—their third victory in a row to open the season.

“I thought [Holy Cross] came out and executed really well, and we came out a tough flat,” BC’s first-year head coach said. “We didn’t let that bother us, and we wore them down as the game went on. One of the biggest adjustments was trying to keep the ball as much as we could out of Manis’ hand.”

BC was largely successful in doing so, as while Manis piled up 30 points, she scored just seven points after the half. The Eagles used a second-quarter push to build a 10-point lead, then doubled that in the third. The Crusaders managed just 22 points in the second half, connecting on just 2-of-13 shots in the third quarter as the game was put firmly out of reach.

BC manhandled Holy Cross on the boards, out-rebounding the Crusaders by an impressive 41-22 margin. Even more notable was the second-chance opportunities the Eagles found throughout the game, as they piled up 19 points after extending possessions with offensive rebounds. The extended possessions also led to further chances from 3-point range, and BC tied its season-high with 13.

“That’s something we’ve emphasized since I got here,” Bernabei-McNamee said of the strong rebounding. “I want our shooters to feel like they have the freedom to shoot if they’re open. If you’re not crashing the boards, they don’t have that.”

Dickens and Garraud were plenty comfortable to let it go from deep, each hitting five 3-pointers. Picking apart Holy Cross’s soft 2-3 zone, the duo found themselves with plenty of space to shoot, and they found success. The Eagles, a game removed from going a woeful 3-for-28 from 3-point range, finished 13-for-30, a nearly 32 percent increase. Taylor Ortlepp, the team’s biggest threat last season, finished 1-for-6 from distance but did record assists on three of Garraud’s 3-pointers.

The strong perimeter game was backed up by the play of Emma Guy and Georgia Pineau inside. Guy, fresh off a career-best 22-point game against St. Peter’s, was used early and often in the BC offense. Despite battling with foul trouble, she had 13 points and three rebounds, two of which were on the offensive glass. Pineau chipped in with 12 points and four boards, while freshman Taylor Soule also made her presence felt with nine points and six rebounds.

The balanced scoring—with four in double-digits and two with three points—enabled the Eagles to pull away when the rest of Crusaders, Manis excluded, went cold. They simply didn’t have the depth or shotmakers to keep up.

BC went on a 12-0 run in the second quarter, taking advantage of a plethora of Holy Cross mistakes. The Eagles, at one point, had forced six turnovers in a span of five minutes, and additionally had a 17-2 edge in points going back to a Dickens buzzer-beater at the end of the first. Manis hit for a pair of layups in a row, and Kathryn Pedi was left open on a switch for a 3-pointer, but Dickens had an answer for a 10-point halftime lead.

The Eagles resumed their fast-paced offense in the second half, jumping out on a 10-3 run. The teams’ offenses slowed down, combining to go scoreless for several minutes, but it was BC who woke back up amid a 1-for-7 spell from the Crusaders. Milan Bolden-Morris knocked down a corner 3-pointer, and Garraud scored four-straight points to push the lead to 20 entering the fourth. The Eagles held Holy Cross without a field goal for the final 5:23 of the quarter, a remarkable run that was far from the first-quarter performance.

The rest of the game was cruise control, as BC eventually closed out Holy Cross with nine unanswered points. It was a far cry from last year’s meeting between these two teams, a narrow nine-point win in which the Eagles had to erase an early deficit as well. The other difference from last season is the up-tempo, efficient offense that BC has displayed in the early going. It came within a missed free throw of hitting 90 points for the first time since a 10-point win against Brown in November 2014.

There’s likely a lot of takeaways from this game for Bernabei-McNamee, but a few stand out. Her two leading scorers were freshmen who were confident enough to shoot from the outset. Her team, without a single senior, was able to absorb an early blow from a decent Patriot League team and respond with a refocused defensive effort and a strong offensive push. And finally, if the inside-out play of hitting shots from beyond the arc but also cleaning up on the boards can continue, the Eagles should be able to continue to pile up point totals that haven’t been seen on the Heights in quite some time.