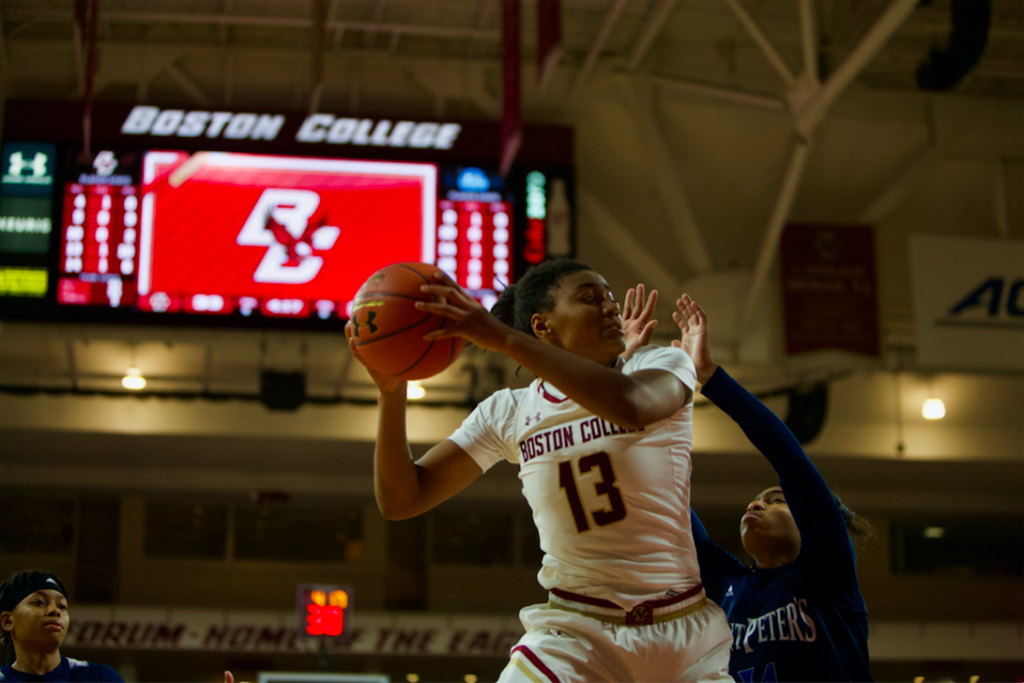 Each of the past two years, Boston College women’s basketball has split its first two games of the season, but after rolling past the likes of Rhode Island and St. Peter’s to begin the 2018-19 campaign, the Eagles (2-0) are in good shape entering the Annual Field Trip Day game against Holy Cross. The Crusaders (1-0) will also look to avoid their first loss of the season as they make an early morning commute from Worcester, Mass. With roughly 2,000 elementary school kids in attendance, it will be interesting to see how both teams perform in front of the likely loud youthful crowd as well with an early morning tip-off coming at 11:30 a.m.

How to watch:
The game will be livestreamed on ACC Network Extra and available on WatchESPN.

1) The Eagles have piled up 177 points in their first two games, surpassing 88 points twice after failing to break 80 once in the entirety of the 2017-18 campaign.

2) Emma Guy poured in a career-high 22 points in BC’s most recent victory over St. Peter’s. She is averaging 15.5 points through two games. Guy was hampered by injuries last season, so her strong start is promising for the Eagles.

3) BC has dominated the glass so far this season, sporting a plus-24 rebound margin over opponents.

1) Four players scored in double figures in the Crusaders’ lone game played this season, a 10-point win over Rider on Sunday. Lauren Manis posted a double-double, scoring 26 points and hauling in 10 rebounds.

2) As a team, Holy Cross shot an impressive 86.2 percent from the free throw line in its win over Rider. Again, Manis was a big reason why, hitting 14-of-15 free throws.

3) On the flip side, the Crusaders showed great discipline in their season opener, limiting Rider to 13 free throws.

The teams previously played last season in Worcester. The Eagles came out on top, 70-61. Holy Cross built an early three-point lead midway through the first, but BC fought back with a run of its own, entering the break tied at 25. The Eagles pulled away in the second, though, on the strength of Georgia Pineau’s second double-double of the season—she notched 19 points and 12 rebounds. Milan Bolden-Morris chipped in 15 points as well.

Right now, the Eagles should stick to their early-season blueprint. They are scoring the ball well, rebounding at an exceptionally high level, and doing a great job forcing turnovers. Based off the stat line, one challenge BC will face is figuring out how to keep Manis in check. A force on the boards and in the paint, it will be important for the Eagles to play good interior defense and keep Manis away from the free throw line as much as possible. Things have gone well thus far for BC and new head coach Joanna Bernabei-McNamee. Consistent play will be important in order to keep the positive momentum going.