Supported by rapper AmirSaysNothing and post-hardcore band Don Broco, Linkin Park’s vocalist Mike Shinoda headlined a fiery solo show at the House of Blues in Boston on Wednesday. Dedicated fans formed a winding line that made its way down Landsdowne Street while waiting in the 20-degree New England chill. The venue quickly filled, with fans packing the floor and both of the upper mezzanines.

As people were still settling in, AmirSaysNothing, who was born Amir Tillard, had the daunting task of every show opener: Firing up the crowd for the headliner. He came out strong with songs from each of his albums, featuring some of his more recognizable tracks, such as “Money Mi$$ion” and “Hah!” The rapper faced a room that was slow to warm up, as the crowd participation was limited during his set. Despite this, he kept an incredibly positive stage presence, which helped energize the room.

Although his best show happened in his homebase of Los Angeles—a city in which Tillard has a solid fan base—the rapper, who grew up in Cambridge, was happy to be back in Boston. After his performance, Tillard echoed the importance of keeping energy high on stage, even when the crowd seems unwilling to reciprocate.

As the crowd finally shook off the Boston cold, the UK post-hardcore outfit Don Broco took the stage. The foursome opened with its popular song “Everybody” from its newest album Technology. Don Broco confronted a crowd largely unfamiliar with its work: Most of the crowd had come to see Shinoda and were largely nu metal or rap fans with little interaction with post-hardcore acts, save a few pockets of die-hard fans who had come to the show specifically to see the group.

Nevertheless, Don Broco got the crowd moving even more, readying everyone for the main event. The band’s heavy hitting and lyrically driven music is unique, but not dissimilar to some of the later Linkin Park albums—this drew in even those who were unfamiliar with the band.The band’s fashion sense is also unique: Lead singer Rob Damiani bounded around the stage in a garrish yellow bucket hat and a blue t-shirt featuring the alien Watto from The Phantom Menace, while guitarist Simon Delaney was wearing a baggy INXS t-shirt and strikingly small shorts. Between crowd involvement—the band had the crowd crouch down very low during a quiet refrain and incited a sudden rise when the beat of “Automatic” burst out of the speakers—and an absolutely wild stage presence, Don Broco was able to send the crowd off to the races.

Shinoda took the stage by storm as every member of the audience erupted into applause, seeming to know each song by heart, and belted them out with him throughout the set. The room ignited when the rapper broke out hits such as Fort Minor’s hit “Remember the Name” and the Linkin Park staple “In the End,” and soothed itself on the sweet melodies of slower songs such as “Castle of Glass” and “Waiting for the End / Where’d You Go,” a mashup of the respective Linkin Park and Fort Minor tracks. The rapper proved to be a musical chameleon and played guitar, drums, and piano in addition to rapping throughout the night.

During the encore, Shinoda took a moment to speak about the importance of mental health: Shinoda sympathized with the crowd of tough Bostonians, but reassured his fans that admitting that you aren’t feeling 100 percent is not an expression of weakness. After this powerful speech, Don Broco returned back to the stage to give an electric performance of “A Place for My Head” beside Shinoda—a first for the tour. The two acts ended the show by leaving the crowd ecstatic and begging for a second encore. 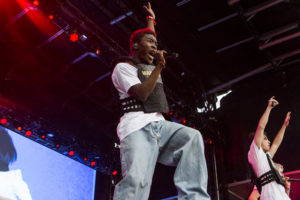