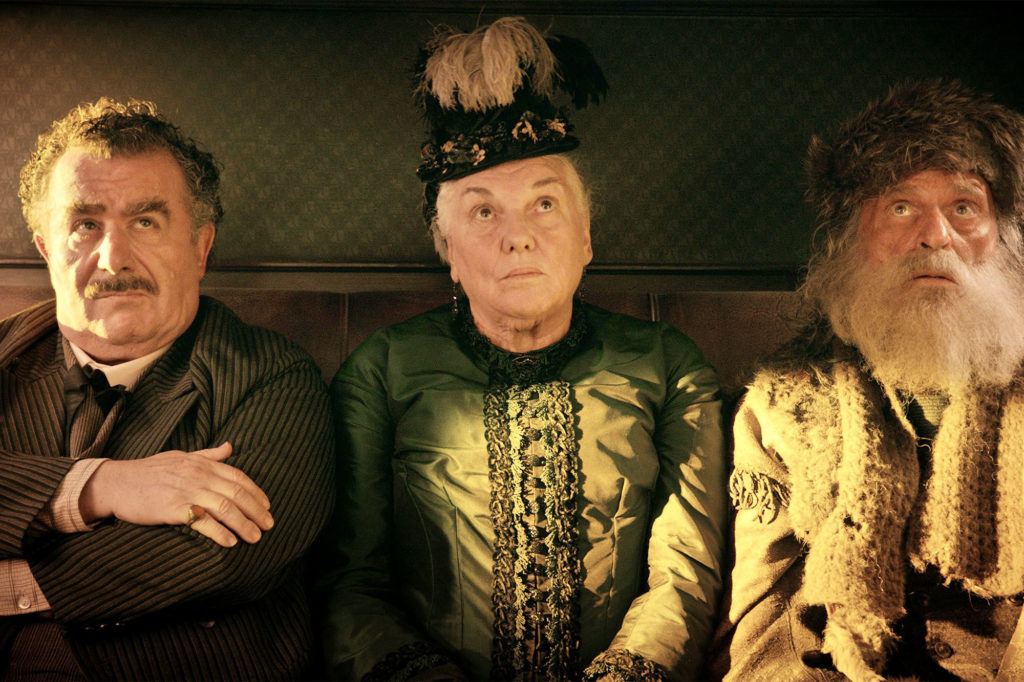 The Coen Brothers have made a career for themselves by sticking to a specific, instantly recognizable sensibility that singularly fuses existential dread with the absurd zaniness of a screwball comedy. In some of their lesser films, this cocktail gives way to an ugly misanthropy where characters are either unsung enlightened savants of the highest order, hopeless exemplars of the fruitless search for meaning, or mouth-breathing fools taking up space.

This penchant for nihilistic caricature can leave behind a bad taste when executed poorly, but their latest effort, The Ballad of Buster Scruggs, sings with a wonder and warmth that places it among their best. It opens on a leatherbound book, an eponymously titled collection of “tales from the American frontier,” where the audience is introduced to the six short fables—each introduced with a handsomely drawn color plate—that comprise this anthology film where brutality and randomness abound.

In Buster Scruggs, the Wild West becomes a playground. Unbound to any of the stories for more than 20-30 minutes at the very most, the Coens make great use of the anthology format to explore the disparate expanses of the frontier, from the arid beauty of John Ford’s monument valley, to the lush greenery of the Rockies in Spring, and everything in between. In swerving from setting to setting, story to story, the film also swings elegantly from the morbid to the madcap and back again.

The opening chapter, for instance, introduces the audience to Buster Scruggs (Tim Blake Nelson), a singing outlaw strolling through life and killing everyone that stands in his way. He’s not particularly malicious, and in some cases he may even be justified in his brutality, as he loquaciously explains his matter-of-fact, common sense philosophy to us in a direct address. In a way, he exemplifies the Coen archetype: confident, goofy, composed, and surprisingly self-aware.

After killing a man in a saloon, in what can only be described as a gruesome Buster Keaton-esque comic set piece, he proceeds to sing a rousing song that gets the entire place up and dancing along. In a world where death and killing are much too common, the Coens see no reason to harp on the tragedy of it all. It is what it is—death happens, and it’s this sobering outlook that connects these brief morsels.

All of the stories are strong, and some of the other standouts include “Meal Ticket,” where Liam Neeson plays an impresario, traveling with the quadriplegic Professor Harrison, ‘The Wingless Thrush’ (Harry Melling), an orator who captivates audiences with dramatic readings from great literary works. Espousing the words of Shelley and Shakespeare, the poor dramatist slowly comes to the realization that another frontier attraction has taken the attention (and dollars) of his audience.

The concluding tale, “The Mortal Remains,” serves as a perfect capstone to this compendium of death. The audience is placed alongside a group of five travels in a stagecoach, en route to some unspecified town as the sun sets, and, slowly, the situation begins to reveal itself as more grim than the initial setup would imply. It’s likely the most abstract of the six stories, and its take on the gothic Western adds some welcome aesthetic and metaphorical depth to this rambling contemplation of mortality.

Revisionism in Westerns has become something of the norm, as if making a film set in the old West has become impossible without toying with or criticizing the conventions of the genre.

Part of what makes The Ballad of Buster Scruggs so refreshing is its straightforward approach to the material. Even with its fair share of goofy asides and comic interludes, the film has an austere, genuine quality that makes it feel as though it were adapted from a lost book written at the end of the 19th century. To be fair, one of the stories, “All Gold Canyon,” was adopted from a story by Jack London, and another, “The Gal Who Got Rattled,” shares a title and some plot with a story by Stewart Edward White. And yet, the Coens adapt these tales beautifully, imposing onto them their inimitable brand of gallows humor and visual panache, so that they fit perfectly alongside the rest. As strange as it may sound for a film that’s deliberately sundered, this is one of the more coherent films in the Coen Brothers’ filmography.