Members of the FACES Council gave a presentation on Tuesday about the importance of having challenging conversation on race and racism on campus, as well as the strategies and practices the organization uses as it goes about facilitating these conversations. The discussion was sponsored by the Career Center, Office for Institutional Diversity, Campus Activities Board (CAB), and Office of International Programs (OIP).

The event was part of the ninth annual International Education Week (IEW), an opportunity for students to learn about and celebrate global knowledge and experiences. The panelists included Hailey Burgess, co-director and MCAS ’19, and Nthabi Kamala, co-head of outreach and CSOM ’20.

FACES, Boston College’s anti-racism organization, was founded in 2003 by Jim Unis, BC ’06, and Chelsea Jones, BC ’06, who wanted to create an outlet to discuss and educate the greater student body about the issue of racism as it affected them both structurally and socially. Lillie Albert, a professor in the Lynch School of Education, became the faculty adviser for FACES in 2004, and the organization was officially recognized as a student organization in 2005.

Since its conception 15 years ago, FACES has had a great impact on the BC community. In 2009, the group worked with residential life to ensure that freshman students of color would never be the only non-white resident on their floor. That situation tended to incite incidents related to racial tensions, as well as feelings of loneliness, in the past.

Furthermore, the Council has coordinated many events that facilitate discussion about racism. Some of these include Good Hair Day—an event which talked about black female empowerment through the lens of natural hair—and No Homo Tho, a look into black masculinity and intimacy.

The panelists discussed FACES’ intention to rebrand in the aftermath of last year’s historic  Silence is Still Violence protests, which the organization played a key role in arranging. One of the steps in this initiative was a change in the group’s mission statement, which the FACES Council voted to approve in September.

“FACES is an organization committed to challenging racism and systems of power as they manifest at Boston College and beyond,” the new statement says. “We seek to end racism and its roots in oppression and dehumanization through conversation, academic forums, and direct action. In these ways, FACES engages fellow students in a desire for justice and contributes to an equitable educational and social environment.”

“You can see that the language in [the new mission statement] is a lot more active,” Kamala said. “While there’s always volume in conversation, which is why we do things like this, times are a lot different than they were before. So we try to put one foot in front of the other.

“I think the mission statement also addresses a lot of criticisms that we’ve gotten, particularly from POC students in the past, that we don’t do enough and all we do is talk. We don’t want that to be the image we have, especially with what we did with UGBC last year at the [Silence is Still Violence] march.”

FACES is often enlisted to engage BC’s students in conversations about race and racism. During the presentation, the FACES Council gave a brief overview of what they might discuss in conversations with the numerous sports teams and student organizations on campus—such conversations could touch on matters such as defining racism and intersectionality.

“Faculty of color don’t just need to be in these niche markets where the administration feels that they’ll be most qualified,” Kamala said. “They’re just as qualified as any other professor.” 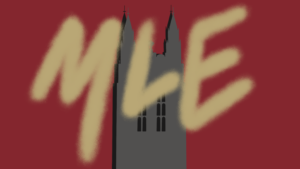 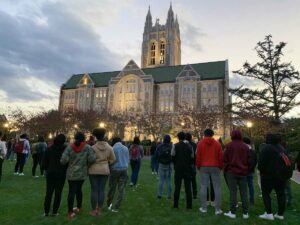