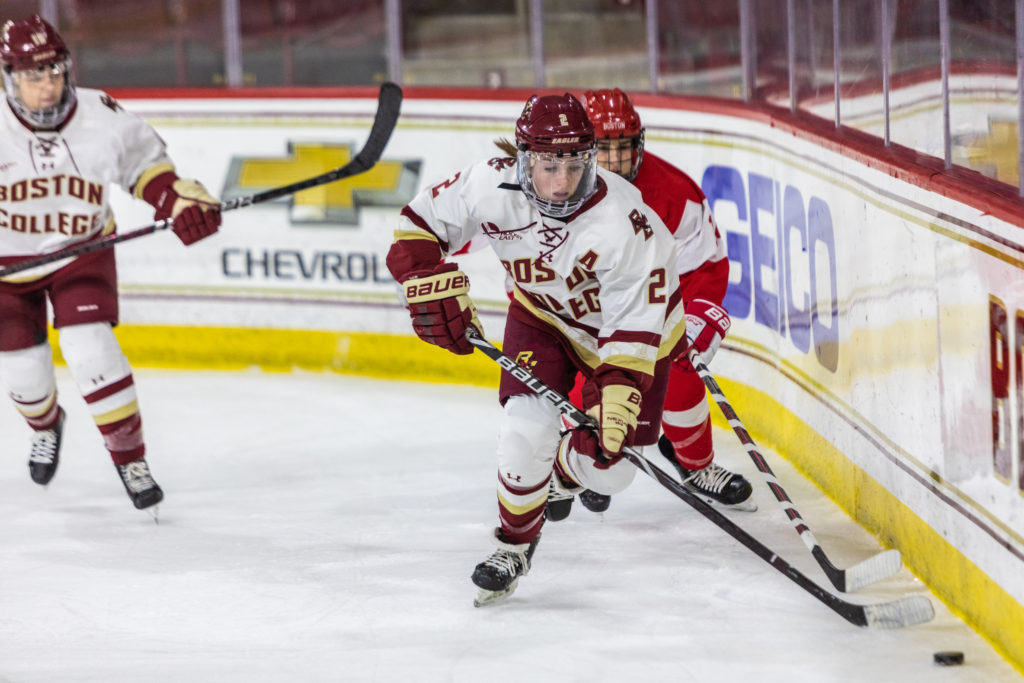 Save for an upset on par with David vs. Goliath, this one might get ugly. Riding a three-game winning streak and having won 11 of its last 12 contests, No. 4 Boston College women’s hockey (11-3-0, 7-1-0 Hockey East) has proven that its two losses to start the season against Minnesota Duluth were nothing more than a smudge in the rear-view mirror. The Eagles are at the top of their game, most recently fending off a tough rival in Boston University. Meanwhile, the newcomer to Hockey East play, Holy Cross (0-13-2, 0-9), is still without a win, having lost its previous 12 games by at least two goals.

In their first season in the conference, the Crusaders still appear to be—quite literally—out of BC’s league. Statistically speaking, the Eagles will be by far the toughest opponent Holy Cross has played in relation to that 12-game stretch. And frankly, the Eagles won’t be facing anyone less formidable than Holy Cross the rest of the season.

Where is BC playing?
Hart Center, Worcester, Mass.

How to Watch:
The game will be livestreamed on ESPN3 and accessible via WatchESPN.

1) The Eagles are undefeated at home through eight games, but just 3-3 on the road. One of those three wins, however, came against Holy Cross back on Oct. 26.

2) Sophomore Megan Keller is tied for second in the nation with four power-play goals. Keller enters Saturday as the team leader in points (16), having tallied six goals alongside 10 assists.

3) BC has scored at least three goals in eight of its past nine games. Overall, the Eagles’ prolific scoring output is good for second in the country in goals per game (1.36), undoubtedly boosted by Keller and a defensive corps that leads the country in points (41).

1) Last time out, the Crusaders scored a season-high three goals in a 7-3 loss to Harvard. It was just the third time they scored more than one goal, with the other two times coming against Connecticut and Merrimack.

2) Maeve Christ is the only member of the team with a positive plus-minus, registering a +1 mark. As a team, Holy Cross has allowed 54 more goals than it has scored.

3) Just 4 percent of the Crusaders’ shots have found the back of the net, the lowest total in Hockey East. Holy Cross averages just 0.87 goals per game and often fails to take capitalize on the one-man advantage—in fact, it’s converting just 3.6 percent of its power plays.

The aforementioned meeting between the two came on Oct. 26, when the Eagles made their first-ever trip to the Hart Center. As expected, BC skated to a convincing 5-1 victory. Four second-period goals iced the game early for the Eagles, who got everyone involved against the Crusaders. Five different players scored in the win as BC piled up 56 shots, while Maddy McArthur turned away 18 shots in the Eagles’ net.

For Holy Cross to come close to competing in this game, it would need to do everything right. That means no penalties—BC scored twice on five power-play chances last time out—as well as no given breakaway chances, and clean, crisp passing for 60 minutes. The Eagles have rolled over opponents by forcing them to play at their own high-flying pace. Much of the Crusaders’ lineup hadn’t played against talent like Cayla Barnes and Daryl Watts before, and that was clear at the end of October. Not much has changed in Holy Cross’s last seven games, so it will take nothing short of a Herculean effort to pull a remarkable upset.