The 1975 Finds Its ‘OK Computer’ Moment on ‘A Brief Inquiry’

Flamboyant frontman Matty Healy screams “We’re f—king in a car, shooting heroin / Saying controversial things just for the hell of it” into the glittery black hole that is “Love It If We Made It,” a single from The 1975’s 15-track third album A Brief Inquiry into Online Relationships. Twinkling with sporadic hi-hat taps and dance music synths, the track struts through a world on fire and in many ways embodies the indie glam rock band’s latest work: In its search for authenticity on A Brief Inquiry, The 1975 is cynically political, elegantly tumultuous, and dramatically introspective.

Following the format of past albums, A Brief Inquiry opens with a track that shares the band’s name. Much like its predecessors, the one-and-a-half minute song is only similar to The 1975’s past work in name and lyrics—all three “The 1975” tracks are lyrically identical—while the beat introduces the most recent shapeshift of the band’s music.

Poetically ironic, The 1975 declares “Modernity is failing us,” but the band’s dedication to pushing the boundaries of modern music on the album results in an anthemic manifesto for a digitized generation. In an ode to Radiohead’s robot narrator in “Fitter Happier,” the British rock band incorporates a monologue voiced by Siri in “The Man Who Married a Robot / Love Theme,” a track that details the life of a man who falls in love with the internet. Accompanying the emotionless voice is a piano-driven composition that morphs into a symphony of whispering violins. Layering eloquent classical elements of music over the sterile bluntness of the voiceover conveys both the amazement of technological advancement and the isolating effects of a life spent online.

“It sounds like a warning of what a future could be,” Healy said in an interview with Pitchfork. “But you realize it’s exactly what we’re living in.”

Drawing further parallels between The 1975 and Radiohead, “I Always Wanna Die (Sometimes)” is driven by a building acoustic guitar ballad that erupts into a cacophony of George Daniel’s bumbling drumming and Adam Hann’s electric riffs much like the angst-laden 1995 hit “High and Dry.” Creeping cello notes that sound as though they were pulled from the score of a Stanley Kubrick film lurk around the corner to round out the song with an almost cinematic vivacity, materializing a timeless track Healy labeled “a gritty ‘I Don’t Want to Miss a Thing’” in the same Pitchfork interview.

Radiohead is far from the only inspiration sewn into the fabric of A Brief Inquiry, however—the album draws on genres of old and new to birth an entirely new sound that is both diverse and cohesive. “I Like America & America Likes Me” toys with autotuning and trap beat drops to produce a sound that mimics that of modern hip-hop, while the sparkling flourishes and trombone cries of “I Couldn’t Be More In Love” pay homage to ’90s R&B love songs. Daniel’s sparse, brushed drumming blends with Ross MacDonald’s steady bass chords on “Mine” in an authentic tribute to jazz music.

While “Love It If We Made It” is the album’s strongest and most outwardly political track with lyrics that go as far as to quote Donald Trump’s tweets—“Thank you Kanye, very cool”—criticism of modern society is laced into the sentimentality of love songs as well. A beat as magnetically ’80s as that of “She’s American” dances along the chorus of “It’s Not Living (If It’s Not With You)” during which the singer pleads “Distract my brain from the terrible news / It’s not living if it’s not with you.” The combination of political undertones and romantic musings makes for a love song corrupted by realism, a track perfectly suited for the chaos of the present.

Sandwiched between rambunctious ramblings, the muted remorse of “Be My Mistake” is not to be overlooked—the track ensures that the shock value of A Brief Inquiry does not come at the expense of the band’s usual sincerity. Tracing the progression of a love lost, Healy trades the hopeful naïvety of the 2013 track “Fallingforyou” and jaded jealousy of the 2016 track “Somebody Else” for hollowing heartbreak on the track. The singer drowns out sorrow with empty sex, pitting lust against love with the lyric “You do make me hard / But she makes me weak.” Rustic acoustic guitar chords underlie the somber lyrics of the confessional ballad, but quiet glimmers of synths course throughout the song’s tear soaked melody, making sure not to stray far from the careful balance of electronic and natural instrumentals on A Brief Inquiry.

Riddled with realism and dripping in discomfort, The 1975 captures the essence of modern times without overstating the drama or understating the absurdity. A Brief Inquiry is The 1975’s OK Computer moment—the album melds progressive musicality and eye-opening social commentary, leaving behind a sonic blueprint for the generations of musicians to come.

the 1975 Radiohead ok computer love it if we made it a brief inquiry into online relationships it's not living (if it's not with you)
Tabbs Helps Eagles Fend off Sacred Heart
Previewing 2018-19 Women’s Hockey: Boston University 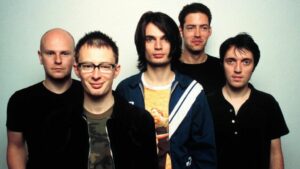