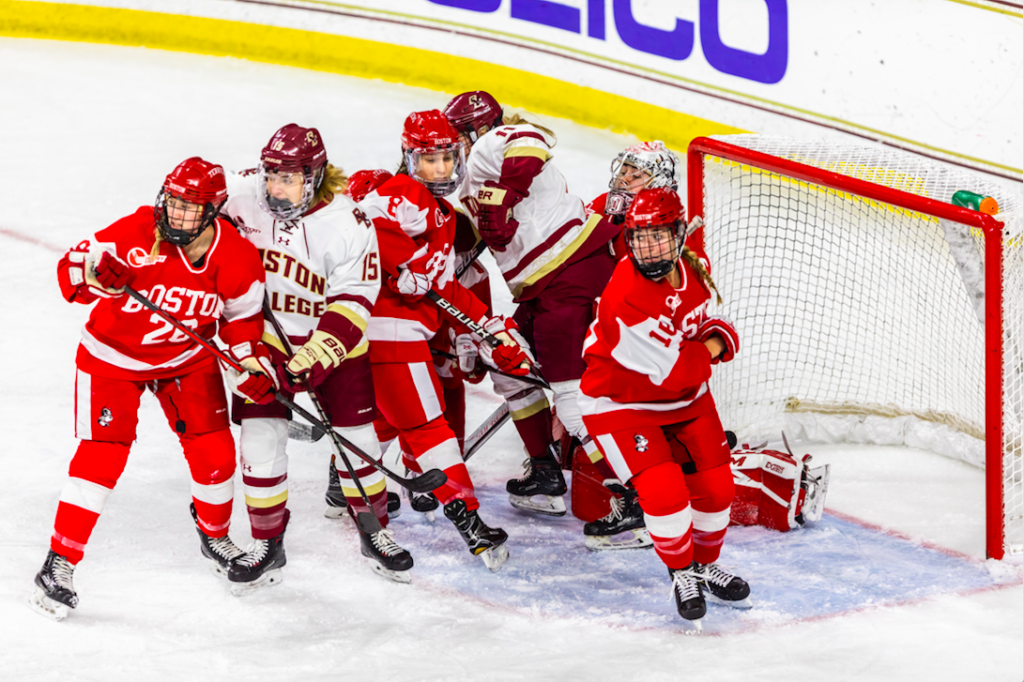 Boston College women’s hockey is gearing up for a home-and-home weekend series against its Comm. Ave. rival Boston University (4-4-4, 3-4-4 Hockey East). Coming off a heartbreaking loss in overtime to Northeastern on Tuesday, the No. 4 Eagles (12-4, 9-2) are looking to finish off a season sweep of the Terriers. BU is skating into the weekend in good spirits having knocked off Brown 5-2 in Rhode Island earlier this week.

Who is BC playing?
Boston University

1) Six of the last seven games between BC and BU have been decided by one goal or less.

2) The Eagles are undefeated at home this season, scoring 26 goals at Kelley Rink. It’s been mostly smooth sailing, save for a trio of one-goal games against No. 10 Saint Lawrence twice, and the Terriers once.

3) Daryl Watts leads the Eagles with nine goals this season, scoring her latest with 1:42 left in the first period against Northeastern Tuesday. The Eagles average 3.3 goals per game—0.9 more than BU.

2) The Terriers found themselves in the penalty box eight times for 16 minutes against the Eagles the Tuesday before last. It was a season high in penalties for BU, who let up two goals while on the penalty kill.

The teams last met at Kelley Rink on Nov. 20. The Eagles tallied their 29th all-time series win against the Terriers, 4-3, narrowly avoiding overtime. Lindsay Agnew scored the first goal of the game in the first seven minutes, and soon after, Megan Keller chipped in another. However, the comfortable two-goal lead didn’t last, as BU found the back of the net twice to tie the game before the end of the first. Kelly Browne slid the puck past the Terrier’s goaltender for the only goal of the second period, before Maegan Beres scored her first and only goal of the season, extending the Eagles’ lead to two once again. During a power play late in the game, BU’s Abby Cook scored on a slap shot through the traffic on the ice, but the late surge wasn’t enough.

Coming into the weekend, the Eagles are looking to gain much-needed points to keep pace with Northeastern in the Hockey East title race. BU is always a pesky opponent, so BC will need to showcase its high-scoring offense and protect the net against its rival. Showing serious home rink advantage this season, the Eagles will need to stay on their game against the Terriers, who have had a perfectly mediocre season—they’re tied across the board in wins, losses, and ties with four apiece. Based on their overall performance on the ice this season and against BU thus far, the Eagles will likely take home a win in one—and potentially both—games this weekend.