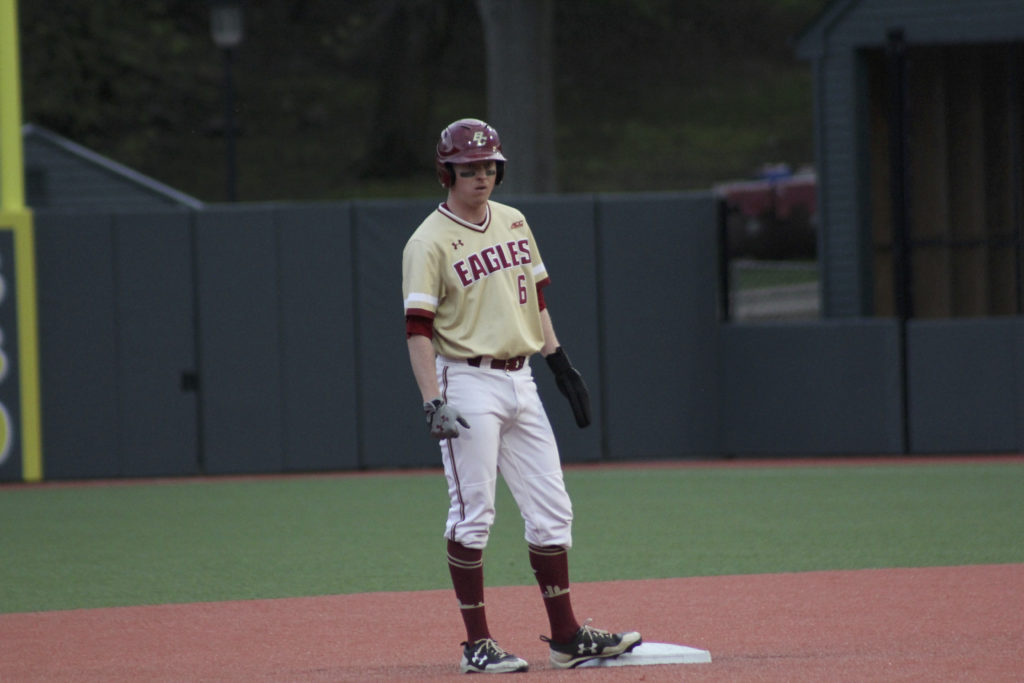 Boston College baseball released its full 2019 schedule, which opens in typical New England fashion with 15 games in a row away from home, Wednesday morning. The Eagles are looking for a bounce-back campaign after a 2018 season in which they went 17-32 and lost seven-consecutive series to close the year. Despite those struggles, the Eagles return a host of talent in the lineup and bullpen, as well as 11 new freshmen, and will be looking for their first winning season since 2016, when they made a run all the way to the NCAA Super Regionals.

→ BC kicks off the season with a four-game series against Jackson State, a team that went 31-17 in 2018 and presents a tough opening-weekend challenge. The Tigers finished ninth in the country in batting average (.303) last season, have won 30 or more games six-consecutive years, and also made back-to-back appearances in the NCAA tournament in 2013 and 2014 as Southwestern Athletic Conference champions.

→ The Eagles return to Florida for their second consecutive warm-weather weekend series to start the season. Though Bethune-Cookman did limp to a 24-34 finish in 2018, the Wildcats aren’t a team to take lightly. They made consecutive appearances in the NCAA regionals in 2016 and 2017, and swept the weekend series between the two teams the last time they met in 2017.

→ The Eagles’ lengthy road swing to begin the season continues at Kentucky, for a date with a Wildcats team that is coming off a fifth-place finish in the SEC East and made a run to the NCAA Super Regionals two years ago. Kentucky will be looking to replace a lot of talent on the roster, as it had 13 players—the most of any program in the country—selected in the 2018 MLB Draft.

→ BC kicks off its ACC slate with three games at Louisville, which made its seventh-straight NCAA Tournament last season and finished third in the Atlantic Division. The Eagles lost two of three at home to the Cardinals last year and are just 3-9 all time against their conference rival. BC has only beaten Louisville in a weekend series once, back in the 2016 season.

→ The Eagles make the short trip over to Brookline for a contest against local rival Northeastern. BC is 57-35 all-time against its neighbors, but lost the last encounter between the two teams in 2018. That game, which the Huskies won 7-4 in 18 innings, snapped a six-game winning streak for the Eagles in the series between the two teams.

→ For the home opener, BC welcomes Siena to town. The Eagles were scheduled to play the Saints in 2018, but the game was postponed due to weather. Siena finished last season 21-35, fifth in the Metro Atlantic Athletic Conference, and hasn’t made the NCAA Tournament since 2014.

→ The Eagles’ conference home opener is quite the stiff test, as Clemson comes to the Harrington Athletics Village. The Tigers swept BC in South Carolina last season, winning by an average of six runs. Clemson is losing a lot of production—notorious Eagles killer Seth Beer is off to professional baseball, for one—but it will remain a strong offensive team that’s difficult for pitching staffs to contain.

→ The conference schedule doesn’t get any easier for the Eagles, as they travel to Florida for the third time to face a Seminoles team that won the ACC Tournament in 2018, before bowing out in the Nashville Regional after consecutive losses to Samford and Mississippi State. BC has historically struggled against FSU and holds just a 5-31 all-time record against the Seminoles. Last season, FSU swept the weekend series between the two teams.

→ The Eagles kick off the 29th edition of the Beanpot against Massachusetts. BC beat the Minutemen, 9-2, in the consolation round last season and have an all-time record of 7-5 against UMass in the tournament. The Eagles have won six-straight games against their city rival.

→ BC plays its second-consecutive conference home series against Georgia Tech. The Yellow Jackets are historically one of the top teams in the ACC and have made the NCAA Tournament six times since 2010. They slumped last season, though, finishing fourth in the Coastal division. The Eagles haven’t played GT since the 2016 season, when they split a four-game series with the then-No. 22 Yellow Jackets.

→ Consecutive losses to Mississippi State and Oregon State ended the Tar Heels’ season in the College World Series, a disappointing turn of events for a program that has 11 all-time appearances in the eight-team bracket, but has yet to win a title. Ten players were selected in the MLB Draft, but UNC still will have plenty of veterans returning poised to make another run.

→ The Blue Devils advanced to the Super Regionals for the first time in program history, falling short in an elimination game against Texas Tech. Duke had five All-ACC selections, sent seven players to the MLB Draft, and set program records for wins—both overall and in the conference. Even more is expected from the Blue Devils this season. Despite losing six regulars in the lineup, they still boast plenty of pitching depth and have a strong incoming class of recruits.

→ The second-worst team in the ACC last season, the Hokies are coming off a year in which they managed just eight conference wins in 30 tries and finished nine games under .500. BC took two of three from VTech last season and will be looking to win its third series in the last four seasons against the Hokies.

→ Last season, the Irish slipped by BC in two of their three home games for a series win. Notre Dame won by a 5-4 scoreline each time, while the Eagles’ lone victory came in a resounding 6-0 win. The Irish have struggled as of late, going an uncharacteristic 24-30 in 2017 and last registering a winning season in 2015.