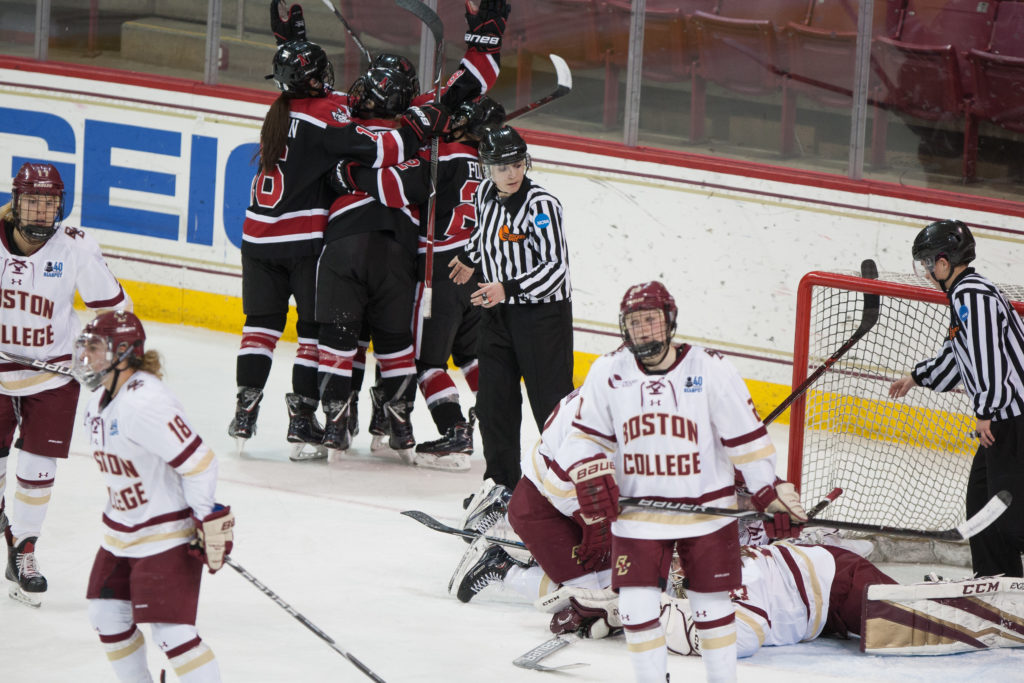 A firm pattern has taken hold the last few years in Hockey East play: Boston College women’s hockey would cruise through the conference regular season, then at least make an appearance in the conference championship game—even winning it two of the last three years. There were signs of that pattern changing last year, especially when Connecticut upset the Eagles in the semifinals—and the effects have only carried over to the 2018-19 campaign. Things are far from normal as we enter the holiday break, with BC looking on from a distance while sitting just inside the bounds of the national polls.

At this point in the season, it’s clear which team is poised to run away with the conference title, and it’s not the program that has taken the last five regular season crowns. Holding a six-point edge over BC, who has dominated the regular season in recent history, Northeastern (13-2-2, 12-1-2) has already beaten the Eagles once and has just one conference loss in 15 games. The No. 3 Huskies didn’t get the bulk of the preseason headlines—that was the product of BC bolstering its already loaded roster with Olympians—but things haven’t gelled in Chestnut Hill and Northeastern has taken advantage.

The freshman duo of Alina Mueller and Chloé Aurard are third and fifth in the conference in scoring, respectively. Defenseman Brooke Hobson is the second-highest scoring player at her position and goaltender Aerin Frankel has been the conference’s best in save percentage and goals against average. With the No. 1 scoring offense (3.53 goals per game) and the No. 2 defense (1.65), things are going swimmingly for Dave Flint’s team. Yes, the Huskies claimed the Hockey East tournament title in 2017-18, but they bowed out to Colgate in the NCAA Quarterfinals. Things are lining up for a deeper run after the New Year.

Providence (15-3, 9-2), not BC, comes in on pace for second in the conference. In four fewer conference games, the No. 7 Friars have just two less points than the Eagles and already have one win over them on the season. Providence hired Matt Kelly as its new coach and have found results thus far with just three losses in 18 games. Madison Myers has been nothing but reliable in net as the senior goaltender is second in the conference in goals against average, while sophomore forward Maureen Murphy has been one of the conference’s best players in her second season. Murphy leads Hockey East players in goals (17) and is second in assists (14), a potent scoring threat who also facilitates the conference’s second-highest scoring offense.

Meanwhile, BC (13-7, 10-5) limps into the break having lost four of its last five games. Despite welcoming back U.S. National Team gold medalists in Keller, Kali Flanagan, and Cayla Barnes, the Eagles haven’t lived up to expectations. They sit just six games over .500, far from the preseason expectations as conference frontrunners, and they’ve slid to 10th in the national polls. Something isn’t working in Chestnut Hill, and BC is going to have to push hard if it wants any shot at winning the regular season again. The Eagles still have two games left against both Providence and Northeastern, but at this rate, a third-place finish—or worse—seems like the most likely result.

It’s been an outstanding season so far for Merrimack (11-6-2, 7-6-1), which failed to qualify for the Hockey East tournament in 2017-18 but has returned with vengeance. Slotted at ninth in most preseason outlooks, the Warriors have flipped the script and already surpassed last year’s conference win total of six. Merrimack had three players drafted in the NWHL Draft for the first time in program history and entered the break having split a weekend series with BC. Katelyn Rae  has 13 goals, four off the Hockey East pace set by Murphy, and Samantha Ridgewell has been one of the conference’s top goaltenders. The big preseason question surrounding the program was how experience would play into this season—the Warriors didn’t lose any players to graduation—and the early results have been overwhelmingly positive.

Boston University (8-4-4, 5-4-4) was expected to really miss Patty Kazmaier finalist Victoria Bach—she was good for two points a game last season and replacing that scoring seemed to be a tall task. The duo of Jesse Compher and Sammy Davis has had something to say about that, though. Compher leads Hockey East players with 1.94 points per game, piling up 11 goals and 20 assists, while Davis isn’t far behind in fourth in points per game. The tandem has guided a Terriers team to five conference wins on the strength of an explosive power play. Issues concerning staying out of the box and while on the penalty kill have cost BU plenty, however, and sophomore Corinne Schroeder has improved in year two but not to the point where she’s reliable in net.

There is a substantial drop off from the sixth-place team to the quartet of teams that find themselves fighting for three spots in the postseason. Each program, in a comparable number of conference games, has recorded either eight or nine points. With Holy Cross a distant speck on the horizon, one of these teams will be watching from the sidelines when the 17th Hockey East tournament arrives in the spring.

It starts with the Huskies, who played spoiler last year and came within a goal of the conference title. They’re right back where they were last season in seventh place and will be looking to hold on to that spot in the coming months. UConn has played smart, registering the fewest penalty minutes of any Hockey East team, but doesn’t have a lot else going for it. The Huskies rank seventh in offense and eighth in defense, but lack any notable players up top and goaltender Morgan Fisher hasn’t been anything special.

The most disappointing group of the bunch has been the Black Bears, who entered the season with the reigning Hockey East Coach of the Year Richard Reichenbach and projections to finish as high as fourth in the conference. After all, Maine had won its first playoff series in program history in 2017-18 and narrowly lost to Northeastern in the semifinals. Yet the step backward has been steep. The Black Bears have struggled mightily in close games, as a third-ranked scoring offense and fifth-best defense hasn’t translated in conference play.

UNH finished seventh last season and is on pace for a similar result this year. Kyra Smith and Ava Boutilier have split time in net and have played well, but the Wildcats are having a difficult time finding anything on the other end of the ice. The same could be said about UVM, which is averaging less than two goals per game. The difference between the two, though, is that the Catamounts are a sieve on defense—they’re allowing the second-most goals in the conference with a mark that’s nearly a half a goal worse than UNH.

Holy Cross (1-16-2, 1-12) is, well, bad. Still, what else would you expect from a program that has never played at the Division I level? The Crusaders made the jump into a difficult league with three top-10 teams, and the result has been an ugly -52 goal differential in just 13 conference games. Holy Cross does have one thing to hang its hat on—its first and only Division I win was an absolute stunner. The Crusaders welcomed in an undefeated Hockey East team in No. 5 Northeastern and handed the Huskies a shocking 5-3 upset. Overall, Holy Cross is scoring a goal per game and allowing 4.37. It’s the painful process of building a program, so hold judgement and give the Crusaders and head coach Peter Van Buskirk a few years to figure things out.