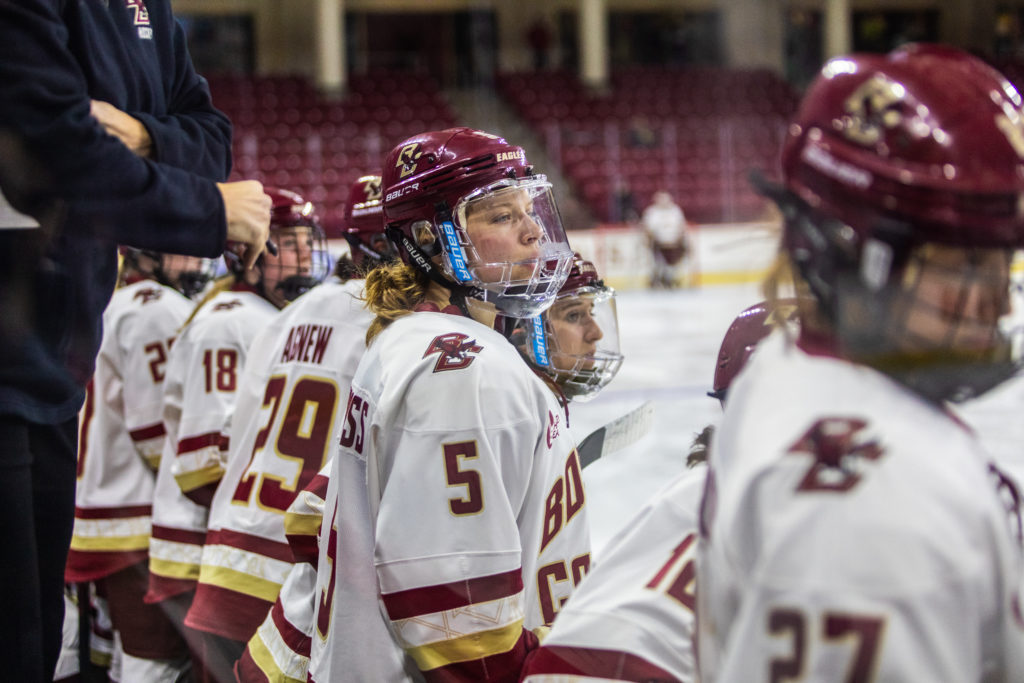 The last time Boston College men’s hockey and women’s hockey suited up, things didn’t exactly go as planned. The former was blanked in a big road game against its rival Notre Dame in its return from winter break, while the latter was upset by Merrimack for its fourth loss in five games on Dec. 8. Both teams return to this action this weekend, as the men are avoiding the brisk January weather with a two-game road trip to No. 13 Arizona State, while the women continue Hockey East play with a game in New Hampshire.

A chance to shake off the disappointment of a 4-0 shutout at the hands of the Irish presents itself with two opportunities for ranked wins. The Eagles entered the break on a six-game unbeaten streak, but couldn’t crack Notre Dame goaltender Cale Morris in South Bend. BC could be in for a tough go of it, though, as it comes into Arizona with zero wins in six tries against non-conference opponents this year. The games haven’t been close, either. The Eagles lost to Wisconsin, Quinnipiac, St. Cloud State, Bentley, and Notre Dame by a combined score of 26-7, with BC failing to score in four of those games.

That’s a far cry from how the Eagles have played in conference play—they have picked up points in eight of their nine games and have scored three or more goals in three of the last four. Head coach Jerry York will need that offense to show up against the Sun Devils, who are coming off an overtime win against No. 3 Minnesota State at the Desert Hockey Classic in the consolation game. Arizona State is 14th in the country in scoring offense (3.23 goals per game), almost 40 spots above where the Eagles fall—and that’s not even taking into account their non-conference struggles. BC is scoring almost a goal less per game, leaving the Eagles unequipped for a shootout.

Two players stand out on both sides, and they play prototypical positions. Both teams boast excellent goaltenders and impressive scoring threats up top. For Arizona State, it’s Ottawa draft pick Joey Daccord manning the net and Johnny Walker is a big threat up top. Daccord is 22nd in goals against average and ninth in save percentage, additionally pacing the country in shutouts with five. Walker, meanwhile, leads the country in goals by a healthy margin—he’s piled up 18 in 21 games, eight on the power play (which also is first in the country). For the Eagles, it’s Joseph Woll and David Cotton. Woll, the Hockey East Goaltender of the Month and Toronto Maple Leafs draft pick, is 14th in goals against average and 11th in save percentage, comparable to Daccord. Cotton is a hair off of Walker’s goals per game pace, but has still piled up 11 goals in 15 games as the anchor of BC’s top line.

It’s easy to say that the holiday break was much needed for head coach Katie Crowley and the No. 10 Eagles. They didn’t just lose four of their last five games—they were swept in a home-and-home by rival Boston University, handed a brutal overtime defeat by No. 3 Northeastern, and additionally lost to a Merrimack side that has historically had fits against the Eagles. It was a brutal stretch, one BC is looking to shake off as it resumes conference play against the Wildcats, a team the Eagles took two of three against in 2017-18.

UNH had a much different close to the first semester. The Wildcats, picked to finish seventh in Hockey East after a fifth-place finish a year ago, were unbeaten in their final seven games of 2018. UNH beat Holy Cross and Dartmouth, swept Merrimack, then took three points from Rensselaer and tied Harvard. The Wildcats don’t have one go-to star—Taylor Wenczkowski and Nicole Dunbar are tied for the team lead with 11 points apiece—and their offense and defense both fall in the bottom half of the conference, but things still managed to come together. UNH scored three or more goals three times in its last seven games, a substantial improvement on its 2.15 average per game in conference play.

BC clearly outmatches the Wildcats on paper, and one would expect that Crowley—with her team given a month off—would have the Eagles in much better shape than the final five games of the first half. BC already has five conference losses—three more than it had all of last year. To turn it around, it’ll have to start with a strong effort against the Wildcats in a potential trap game on the road. The Eagles are second in the conference in scoring offense and third in defense, Megan Keller is fourth in points, and freshman goaltender Maddy McArthur is third in goals against average. They have the pieces to win a lot of games, it’s just a matter of fixing the issues that plagued them in the first half and getting off on the right foot.