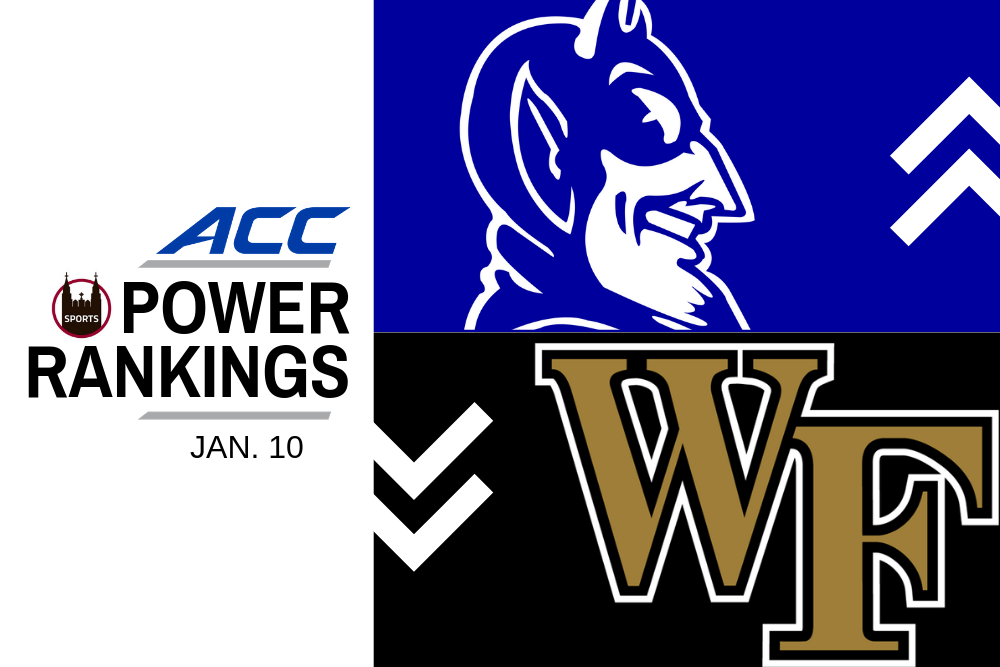 Editor’s Note: Each week, we will release our ACC power rankings. Rather than standings, power rankings take into account the big picture—not only a team’s record, but its overall talent and week-by-week performance.

The ACC opened up league play on New Year’s Day, and every team now has at least two games under their belt. Six programs rank inside the AP Top 25, including two of the top four, one of which is one of the final two undefeated teams in the country. Here’s the first edition of our ACC Power Rankings, with a heated battle for the top spot set to be played over the coming weeks.

1) Duke (12-1, 2-0 Atlantic Coast, AP: No. 1). Since R.J. Barrett missed five shots in the final minute of a one-point loss to Gonzaga, the Blue Devils are 8-0. Their first two conference games were decided by a combined 41 points and the wins featured jaw-dropping performances from Zion Williamson. The human highlight machine dropped double-doubles of 25 points and 10 rebounds and 30 and 10 against Clemson and Wake Forest, respectively.

2) Virginia (13-0, 3-0, AP: No. 4). Another year, another top-five defense for the Cavaliers that just grinds opponents into a pulp. Opponents are shooting 25.1 percent from beyond the arc against UVA and somehow free throws aren’t even finding their way in under the watchful eye of Tony Bennett. The Cavaliers came within a win of going undefeated in conference play last season, but that’ll be trickier this time around with two matchups against Duke looming.

3) North Carolina (12-3, 2-0, AP: No. 12). Good things come to those who wait. Roy Williams lost a lot of leadership when Joel Berry II and Theo Pinson departed, but this younger Tar Heels team is starting to gel into something quite capable of making a strong run. While seniors Cameron Johnson and Luke Maye are always reliable, it’s been freshman Cody White and Nassir Little that have stepped in and impressed.

4) Virginia Tech (14-1, 3-0, AP: No. 9). On Wednesday night, against a subpar Georgia Tech team, the Hokies—one of the nation’s elite perimeter shooting teams—shot just 5-of-27 from beyond the arc. They still ground out a win, leaning on an impressive defensive effort that speaks to the potential of this team. Nickeil Alexander-Walker can score from anywhere and Kerry Blackshear Jr. is a force inside, but it’s going to be the defense that picks them up when the shots aren’t falling. VTech currently has its best defense since 2008, and that team had 21 wins despite an anemic offense.

5) Florida State (13-2, 1-1, AP: No. 13). The Seminoles climbed as high as ninth in the polls before UVA brought them quickly back to earth—the game was over by halftime. FSU head coach Leonard Hamilton said, per virginiasports.com, after in his postgame press conference that “we’re still not as totally in sync as I think we will be as we move through the season.” The Seminoles are defined by size—all five of its starters are 6-foot-4 or above—but its been Albany transfer David Nichols, a lowly 6-foot-even, that’s been a refreshing addition. Nichols has double-digits in three of his last four games, including 13 in a win over Miami.

6) North Carolina State (13-2, 1-1, AP: No. 15). Head coach Kevin Keatts arrived in Raleigh used to winning—his UNC Wilmington teams went 54-14 over his last two years there—and his success has only continued. The Wolfpack was a nine-seed in the NCAA Tournament in Keatts’ first year, but it’s aiming for a lot more this season. N.C. State lost to in-state rival UNC by eight on Wednesday night—it was always close but the Tar Heels led from start to finish—yet that shouldn’t discourage the program. The Wolfpack has a lot of depth, with seven players averaging at least seven points, and that’ll serve Keatts well in conference play.

7) Syracuse (11-4, 2-0). What a weird start to the year. It’ll be awhile before the public trusts the Orange again—that’s what happens when you lose to Connecticut and Old Dominion. Syracuse has won four in a row since being shellacked by No. 19 Buffalo, and those wins have included some impressive performances. Elijah Hughes, a junior transfer from East Carolina, had 22 points and 10 rebounds in a win over Notre Dame, then a balanced team effort carried the Orange past Clemson. Don’t be surprised when this team is again on the bubble in March, though—Jim Boeheim has developed an affinity for maneuvering his team into that spot.

8) Louisville (10-5, 1-1). Every team has growing pains—the Cardinals fell to Pittsburgh in overtime on Wednesday—but Chris Mack is helping this team take strides in his first year. Mack oversaw an offense at Xavier that finished eighth in adjusted efficiency last season and he’s brought that to Louisville. The Cardinals halved their national ranking from last season and have become one of the conference’s most dangerous offensive teams, scoring 90 points on 68 possessions against Miami in their ACC opener. While Jordan Nwora didn’t get much playing time under Dave Padgett last year, he’s erupted in his sophomore campaign to the tune of 17.3 points per game.

9) Clemson (10-5, 0-2). The Tigers lost a pair of four-year contributors in Gabe Devoe and Donte Grantham (who missed much of last year with injury), but still returned almost 60 percent of their minutes. This includes the duo of Shelton Mitchell and Marcquise Reed, both experienced guards, and big man Elijah Thomas. The senior classmates are combining to account for 46 points per game, with Reed a pure scorer and Thomas just a few rebounds shy of averaging a double-double. Clemson doesn’t have a bad loss—all five came to teams in KenPom’s top 40—but it doesn’t have a good win, either.

10) Georgia Tech (9-6, 1-1). Non-conference struggles aside, this team can play defense with the best of them. Against VTech, that was clear—it held one of the more efficient scoring teams in the conference to just 52 points. The problem for Josh Pastner’s Yellow Jackets, however, is that the offense is woefully bad. They managed just 49 points against the ninth-ranked Hokies, falling by three in a disappointing setback.  “You can only defend for so long, but without scoring, it’s demoralizing,” Pastner said after the loss, per The Athletic. The offense is 222nd in efficiency, with Jose Alvarado seemingly the only player with the ability to do much. Turn that around, and this could be a team that makes some noise.

11) Miami (8-7, 0-3). Chris Lykes is 5-foot-7, but “if he were 6-5 or 6-6, he’d be Michael Jordan,” head coach Jim Larranaga likes to say. Lykes is leading the way with 17.3 points per game for a wildly frustrating Hurricanes team—they’ve strung together winning streaks of five and three games as well as losing streaks of four and three. They played N.C. State and FSU close, but find themselves winless through three conference games. Miami doesn’t do any one thing well, it doesn’t have much of a bench, and struggles to both rebound and get to the line. There’s a lot of work to be done if it wants any chance at another at-large bid to the NCAA Tournament.

12) Pittsburgh (11-4, 1-1). There’s no quick fix for a program coming off a winless conference season, but Jeff Capel has definitely taking the right steps with the Panthers. Leaning on youth, Pittsburgh went 10-3 in non-conference play (a step up from last year’s 8-5 mark) and has split its first two ACC games. The Panthers are led by newcomers, with four of its five leading scorers either freshman or transfers. Xavier Johnson has been impressive in his first year on campus, averaging 16.5 points and 5.1 assists while running the point.

13) Notre Dame (10-5, 0-2). A team starved for experience after Matt Farrell, Bonzie Colson, and Martinas Geben graduated took a heavy hit when Rex Pflueger—one of two seniors on the team—went down in mid-December with an injury. Throw in an injury to top-100 freshman Robby Carmody, and Notre Dame was looking at an uphill battle. T.J. Gibbs and John Mooney have stepped up, Gibbs is averaging nearly 15 points per game, and Mooney is a third of a rebound shy of a double-double, but the Irish don’t have the experience to hang with most ACC teams.

14) Boston College (9-5, 0-2). The injury bug has bit the Eagles, too. It seems that almost everyone has missed a game this year, with Jordan Chatman (missed three games), Steffon Mitchell (three), Nik Popovic (two), and Wynston Tabbs (one) all sidelined at one point. Ky Bowman has played in almost 95 percent of his teams minutes as a result, but even a 44-point outing against Hartford wasn’t enough to prevent a loss. BC has dropped three in a row and has looked helpless at times on defense.

15) Wake Forest (7-7, 0-2). Danny Manning might very well be looking for a new job at the end of the year, especially if the Demon Deacons continue to play the way they are. Wake Forest lost an awful lot after a disappointing 2017-18 campaign, with Doral Moore and Bryant Crawford entering the NBA Draft and Keyshawn Woods transferring to Ohio State. These departures have proved to be tough to overcome and no adjustment from Manning has been able to fix much. Silver lining? Freshman Jaylen Hoard is pegged as a late-first to early second round pick in the upcoming NBA Draft. Hoard is averaging 15.3 points and 7.8 rebounds per game for the stumbling program.