Home » Eagles Drop Third Straight After Uninspiring Second Half Effort Against No. 4 Virginia 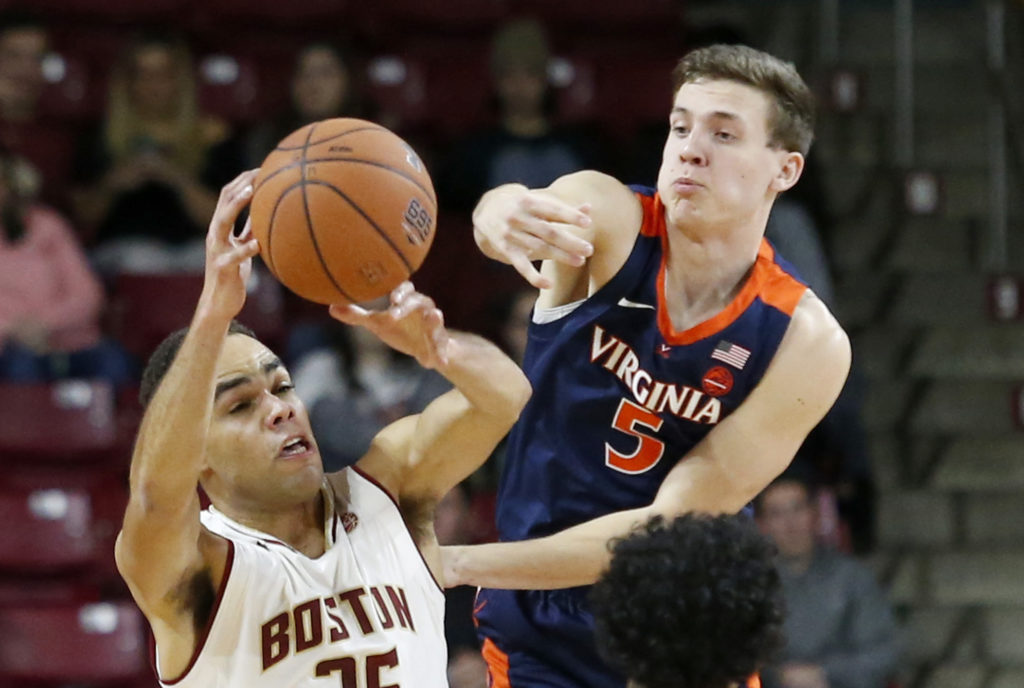 Eagles Drop Third Straight After Uninspiring Second Half Effort Against No. 4 Virginia

Last year, Boston College men’s basketball — three wins removed from shocking the world and defeating No. 1 Duke — nearly pulled off an upset in Charlottesville against Virginia, trailing by just five at the break and closing its deficit to just a single point down the stretch. Jerome Robinson led the charge for BC, tallying 29 points, 18 of which came in the second half charge.

Unfortunately for the Eagles, Robinson’s departure to the NBA has left the team shorthanded in the scoring department, even with Ky Bowman posting career-high numbers. Still, with No. 4 UVA visiting Conte Forum, there was hope that BC could perhaps build off its performance from last year and pick up a marquee win to stop a two-game skid.

In the early going, it appeared as if that upset could come to fruition, as BC put up impressive numbers on offense in the first half against head coach Tony Bennett’s top-ranked defense. The wheels fell off once the Eagles’ offense stalled, though, and the Cavaliers scored without much resistance to pull away quickly to the tune of an eventual 83-56 victory.

For the past couple of months, the Eagles (9-5, 0-2 Atlantic Coast) have been missing at least one starter in their lineup. That trend continued on Wednesday night, as Steffon Mitchell sat out his third game of the season. Luckily for BC, Wynston Tabbs returned to the court, but while he did contribute nine points, four of them came when the game was already decided. The freshman was unable to steal the spotlight like he did in the past against non-conference foes.

Without Mitchell, the fourth-leading rebounder in the ACC, BC greatly struggled on the glass and in defending UVA (14-0, 2-0) Mamadi Diakite. The center came into the game averaging 6.5 points per game, but ended up recording 18 points, 14 of which came in the first half. There was often open space in the paint for the Cavaliers to operate, with missed switches and poor choices continuously plaguing the Eagles.

While the final score would indicate a blowout, it was actually a fairly tight game for a solid portion of the night, especially in the first half. BC and UVA traded blows in the first five minutes of the contest as the two teams battled to a 9-9 draw. For the rest of the frame, the Cavaliers would build small leads, then the Eagles would cut the deficit, only for UVA to respond with a run of its own to extend its edge.

The Cavaliers entered the intermission with a comfortable 43-31 lead—the product of a late 9-0 run. Scoring 31 points in the first half against the Cavaliers—who came into this game holding their opponents to 51.5 points per game—was impressive for BC. The Eagles hadn’t scored more than 58 points in their last four matchups against UVA, but by the half, they were on pace to score 62. Bowman led the Eagles with 11 points, including three triples. The problem for the Eagles wasn’t on offense, it was on the defensive end. BC’s man-to-man defense was simply abused by the Cavaliers. UVA was able to constantly create open looks on the perimeter, as well as wide open space in the paint. For any chance at erasing the 12-point deficit, the Eagles would have to continue to shoot well and make an adjustment to stymie the Cavaliers’ attack.

In the opening minutes of the second half, it appeared that BC was executing that plan. Head coach Jim Christian switched to a zone defense, and his team slowed down the Cavaliers’ offense, at first. The Eagles started out with a 5-0 run and even cut the lead to six with 15 minutes left to play. From that point on, though, it was all UVA. The Cavaliers quickly adapted and began to score at free will. Meanwhile, BC’s offense collapsed while UVA’s defense put the clamps down. The Cavaliers held the Eagles scoreless for seven minutes and crafted a 16-0 run.

By the end of that run, UVA held a 25-point lead with eight minutes left to play—the game was all but over at this point. Bennett sent in his reserves to finish the game, and unlike the Cavaliers’ previous game against Florida State in which the Seminoles piled up points in garbage time, the bench players held their own against BC to top off the 27-point beatdown. In addition to Diakite, three other Cavaliers—DeAndre Hunter, Ty Jerome, and Kyle Guy—also finished in double figures.

The final minutes were not a pretty sight for BC fans. The Eagles looked completely demoralized—what was once a close game had turned into a full-fledged blowout. In the previous outing against Virginia Tech, the Eagles tried to mount a comeback when the game looked out of reach, and in doing so, they cut the deficit to eight. While BC ultimately fell in that contest, one could not discredit the spirited effort that Christian’s team put forth. Against UVA, though, that effort was simply nonexistent.

Quietly, Nik Popovic led BC in scoring with 16 points. Bowman finished with 15 points, and he was unable to catch fire like he did against Hartford when he put up 44. He was practically nonexistent in the second half, registering just four points, and couldn’t find a way through the Cavaliers defense—he was 1-of-5 from inside the arc.

Perhaps the most alarming takeaway from this game was the Eagles’ inability to stop the Cavaliers’ offense. No matter which defensive scheme Christian cooked up, UVA had an answer. The Cavaliers converted 60 percent of their shots from the floor while BC only hit 39 percent, and when the disparity is that great, it’s almost impossible to win. Pair that with the fact that UVA outrebounded the Eagles, 41-21, while piling up 46 points in the paint and it’s not hard to see why the Cavaliers rolled to victory.

BC couldn’t have gotten a more difficult draw to start the ACC with both VTech and UVA, but couple those two losses with the Hartford debacle, and BC now finds itself on a three-game losing streak at the toughest time of the year. The schedule eases up slightly with tilts against Louisville and Notre Dame, but these contests will be played away from Chestnut Hill. The same issues continue to haunt the Eagles as they are plagued by injuries and a lack of depth. And with the team struggling to fill the massive void that Robinson created, the prospects of replicating last season’s success look quite bleak.