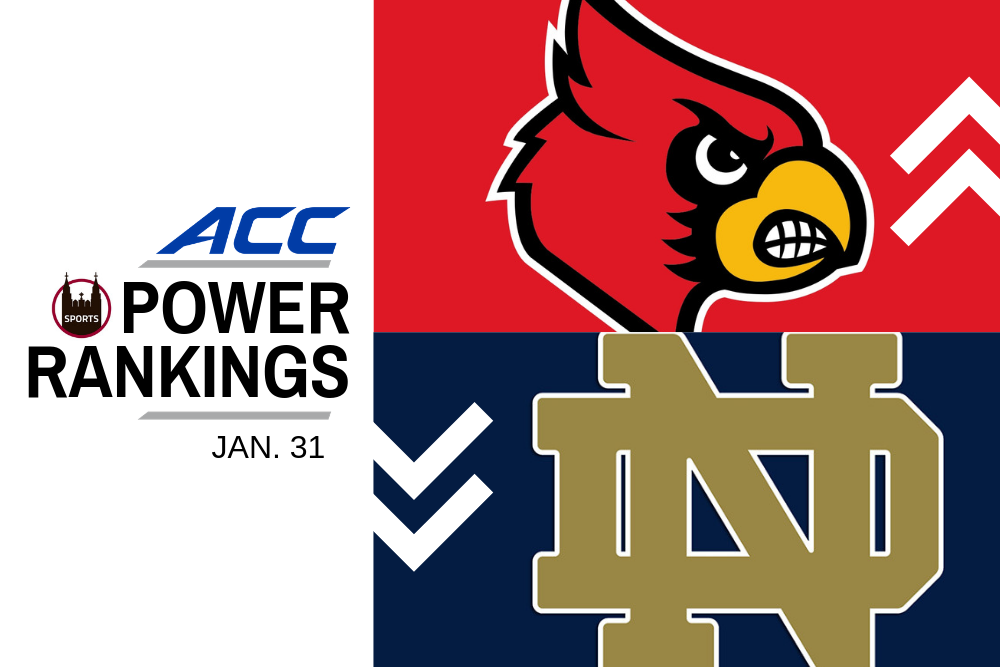 Well, Duke and Virginia are great, but it’s time to welcome North Carolina and Louisville into the race for the conference title. These four teams have made mincemeat of the rest of the conference as they’re a combined 27-4, with two of those losses coming between each other. That’s not to mention the lights out shooting of Virginia Tech, Syracuse’s impressive start, and that, well, Florida State is ranked. Here’s the third edition of our ACC power rankings with an exciting weekend of games looming.

Zion Williamson remains an absolute animal on both sides of the ball. The likely first overall pick in the upcoming NBA Draft was on display in a 22-point blowout against Notre Dame, dropping 26 points on 11 shots from the field. He also chipped in nine rebounds, four assists, and four blocks in a monumental effort. Throw in the fact that the Blue Devils went 10-for-19 from distance despite ranking 305th in the country in 3-point percentage, and a national title berth is seeming more and more likely. They rank third in offensive efficiency and sixth on the other side of the ball—good luck slowing Duke down.

Despite their lowest offensive efficiency since an eight-point win over VCU (who own the nation’s eighth-best defense) in December, the Cavaliers were able to escape an upset bid from No. 23 North Carolina State on the road, beating the Wolfpack in overtime. UVA was frustrated at times, turning the ball over at its highest rate this season (24.2 percent), but rode 15 points from De’Andre Hunter to victory. The Cavaliers have won three straight since narrowly falling to Duke, and still look the part of a conference title contender.

Simply put, this team is a lot of fun to watch. The Tar Heels do so many things well, and part of that is their pace of play. UNC is running at the fifth-fastest adjusted tempo in the nation, a far cry from last year’s No. 46 rank, and it’s finding results. The Tar Heels can score in a heartbeat—their average possession length is just 13.9 seconds—and they’ve won four straight as a result. That stretch includes a 21-point rout of No. 12 Virginia Tech and a thorough 23-point drubbing of Georgia Tech, which has the third-best defense in the ACC.

The Cardinals want your attention—and they deserve it. Head coach Chris Mack’s team has won six straight in conference play, the most recent a 28-point beatdown on a reeling Wake Forest team. Louisville has been unbelievable on both ends of the court, easily tossing aside the dregs of the conference while simultaneously picking up monumental wins over No. 9 UNC and No. 23 N.C. State. Jordan Nwora draws the headlines—he’s cleared double-digits in his last six games and is fifth in the ACC in scoring at 18.2 points per game—but it was Dwayne Sutton who went off for 17 points and 10 rebounds against the Demon Deacons. Perhaps most importantly, the Cardinals have depth. Expect them to keep rising.

A blowout loss to UNC has been answered with back-to-back double-digit wins. The Hokies are playing mad, and Buzz Williams has his team firing on all cylinders in the offensive end. Williams has always been known for producing high-scoring teams, but he’s never had one as efficient as this—you have to go back to his tenure at Marquette in 2009, when he had Wesley Matthews and Jimmy Butler, to find a comparable ranking. VTech is seventh in offensive efficiency, and Nickeil Alexander-Walker is a matchup nightmare—he dropped 25 points on just 10 shots in the team’s latest win over Miami.

Tyus Battle is good. The 6-foot-6 combo guard tallied 31 points in a six-point win over Boston College—his effort was enough to lift the Orange to an important road win. Syracuse is off to an impressive 6-2 start in conference play, and it’s won games in a variety of ways. It has gritted out a defensive win against Clemson, survived a shootout with No. 2 Duke, and locked down Pittsburgh and Miami in home wins. The Orange isn’t even playing to its true potential, so if it can reach the ceiling, a climb up the rankings could be on the horizon.

Yes, the Wolfpack needed Clemson guard Marcquise Reed—a 82.6 percent free throw shooter—to miss four shots from the line in the final 13 seconds and a Braxton Beverly buzzer-beating 3-pointer to escape the Tigers, but it followed that up with a narrow overtime loss to UVA. Playing in the comfort of Raleigh, N.C. surely helped the upset bid, but the team used a balanced offensive attack to keep the Cavaliers off guard. N.C. State has alternated wins and losses thus far in conference play, but boast top-60 marks in offensive and defensive efficiency and can arguably hang with most squads in the ACC.

There’s probably a saying out there about the Seminoles—you never really know what you’re going to get from them. They almost knocked off No. 2 Duke, but have split their last four games. Wins over Clemson and Miami in their last two games are promising, but a lack of a consistent rotation or go-to scorer for that matter could cost them in the long run. FSU’s Mfiondu Kabengele has been a joy to watch in recent games: He comes off the bench to pick apart teams with extended range for a 6-foot-10, 250-pound sophomore. Kabengele’s scored at least 17 points in five of his last six games—he’s also reached that total despite playing around 25 minutes per game.

The Yellow Jackets were run out of their own gym by UNC on Tuesday night—it doesn’t matter if you hold the Tar Heels to around a point per possession if you yourself can’t even crack three-quarters of that. Head coach Josh Pastner has a strong defensive unit, playing a mix of man and zone to strong success—VTech and Syracuse have both had its worst offensive games of the season playing against GT—but it won’t ultimately matter if it can’t keep pace on the other end. This point has been drilled into the ground, but the Yellow Jackets are woefully bad with the ball in their hands. Guard Jose Alvarado has the highest usage rate but a below-average offensive rating—he lacks any help, and a prolonged losing streak could be on its way.

The Tigers want that game back against N.C. State, that’s for sure. A chance at a marquee victory for what would’ve been their second conference win in six tries at the time surely would’ve done wonders for momentum, instead Reed watched it slip away. Brad Brownell guided Clemson to a 25-win season a year ago, but this season has been much rockier. The Tigers can no longer lean on a top-10 defense—pair that with a step back in the offensive department, and you can see why they find themselves in the middle of the ACC pack. Reed is averaging 19.3 points per game and had 26 against the Panthers in their latest win—he’s shooting almost 40 points better from the field than last season.

Conference play is a cruel reality check, the Panthers have dropped four games in a row, with each one decided by double-digits. Head coach Jeff Capel’s bunch has been impressive on defense at times and holds the 28th spot in defensive efficiency rankings, but it was absolutely picked apart by Clemson the last time out. The Tigers poured on 27 points in the opening 10 minutes and coasted from there, it was eventually a 13-point loss but Pittsburgh didn’t have the offense to turn it around. At least Xavier Johnson has been a joy to watch at times—he racked up 30 points against Clemson, ranks fourth in the conference in assists (4.4 per game), and gets to the line with ease.

The Eagles surged out of the gate against Syracuse on Wednesday night, but then forgot how to play offense and watched as their visitors went on a 14-0 run that eventually culminated in a six-point win for the Orange. BC’s unending inability to string together a complete game is remarkable—you can keep the injuries in mind, but the talent is still there to at least make some noise. Jared Hamilton was a spark off the bench for the Eagles—I’d expect to see him work more into the rotation—but BC will need more help for Ky Bowman and Jordan Chatman if it’s going want any shot at not sinking down the conference table.

To say the last four games have been humbling for the Hurricanes would be an understatement. A year removed from a first round appearance in the NCAA Tournament, Miami is currently mired in a four-game losing skid, in which it’s been outscored by an average of nearly 14 points. Granted, these losses came to UNC, Syracuse, FSU, and VTech, but nothing is clicking with Jim Larranaga’s crew. The three previous years, all featuring 20-plus wins, Larranaga oversaw a defense that ranked in the top 60 by efficiency. This season? His team has plummeted to 148th, with the last three opponents piling up points on them with relative ease.

The only reason the Demon Deacons are getting a bump is because of how bad things are going in South Bend right now, but one could argue that they also deserve to reside in the cellar of the ACC. Wake Forest managed just 54 points against Louisville in a blowout loss, and the team has now lost four straight. Somewhat baffling is the fact that the Demon Deacons have a win over N.C. State, their only conference victory, but the odds of repeating that are slim. KenPom.com has a particularly harsh forecast for the final month and a half of the regular season—it doesn’t have Wake Forest favored in a single game the rest of the way.

The Irish won’t turn the ball over—they have an unbelievably low 14-percent turnover rate—but they also won’t score. Notre Dame has cracked 70 points just once in eight conference games, and that’s led, predictably, to seven losses and a lone win over BC—one that wasn’t without controversy. The Irish currently have the worst offense they’ve ever had under head coach Mike Brey, and you can firmly put that on the struggles Brey has had at trying to string together a full rotation. Notre Dame is only seven players deep right now, it’s no surprise that Duke had the Irish on their heels and down 19 after the first 10 minutes on Monday night. Rex Pflueger’s leadership is missed, so are consistent points from Juwan Durham. This is a lost season for the Irish. They were slotted at ninth in the preseason poll, but will be lucky to not finish last.